Halloween in Tokyo's famous Shibuya neighborhood felt like it had returned to its pre-pandemic peak Monday, as revelers including foreign tourists flocked to the popular entertainment district just days after a deadly crush marred a similar event in South Korea.

Following the deaths of more than 150 people in Halloween celebrations in Seoul's Itaewon area Saturday night, Tokyo police were a major presence on Shibuya's wide avenues and tight alleys.

On the iconic pedestrian crossing, officers constantly urged people to keep moving, while others herded crowds by forming human chains along the crosswalk. 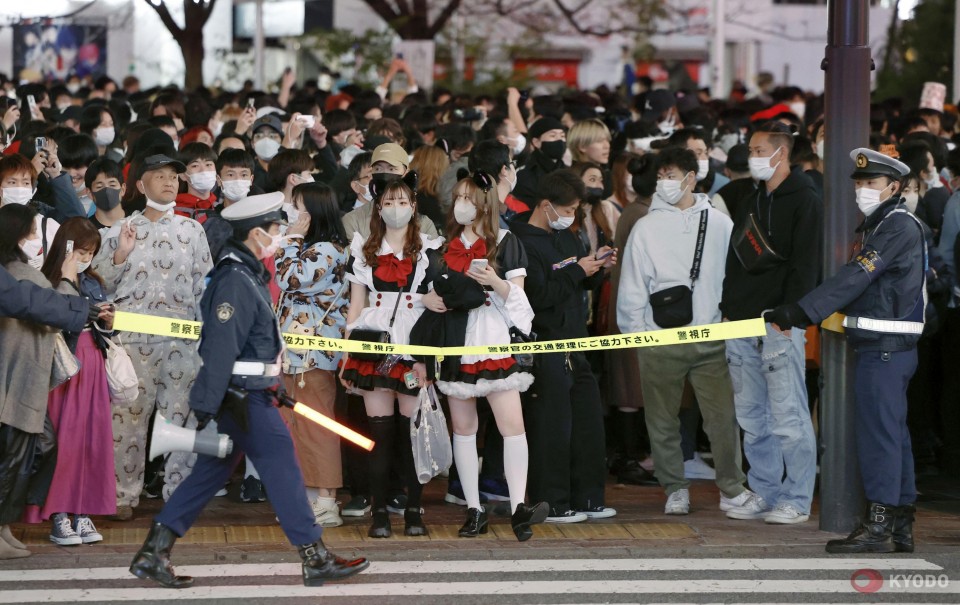 People in costumes stand behind yellow tape held by police officers to guide the crowd at the Shibuya scramble crossing in Tokyo on Oct. 31, 2022. (Kyodo)

Officers in elevated platforms known as "DJ Police" issued constant announcements, including informing the throngs of people below that the traffic lights were about to change and that they must not stop to capture images mid-transit.

Aileen Ayeras, 30, an American who lives in Japan and came to the event with her husband Joshua and their baby son Theo in matching Naruto cartoon series costumes, said that despite the crowds, the event felt calmer and safer than in 2019. "There's a lot more cops, they're really pushy and want you to get through," she laughed. 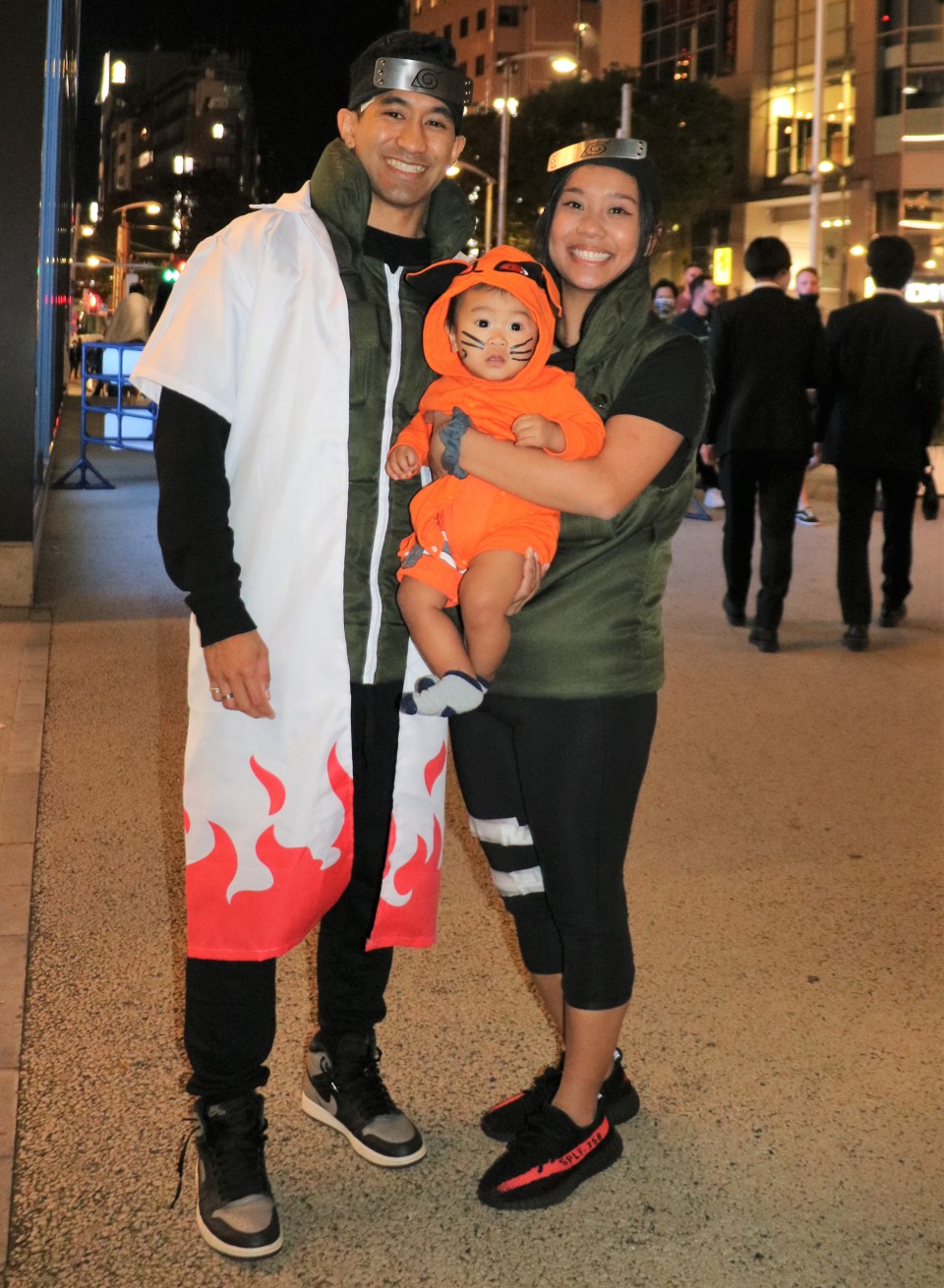 Family of three Joshua (L), Theo (C) and Aileen Ayeras (R) are seen in costumes based on the popular manga and anime "Naruto" in Tokyo's Shibuya area on Oct. 31, 2022. (Kyodo)

Although celebrations fell on a quieter day of the week, crowds seemed about on par with pre-pandemic levels thanks to eased COVID-19 restrictions and Japan's Oct. 11 full reopening to foreign tourists.

Fabio Duque, a 42-year-old engineer from Colombia who arrived in his "bucket list destination" Japan on Sunday night, brought his children to see the event. But he added he and his wife had insisted they depart Shibuya by nightfall, saying, "Unfortunately, we want to stay away because of what happened in Seoul."

Still, for some longtime observers, the crowds over the Halloween weekend seemed smaller, with less emphasis on costumes. "Honestly, I thought more people would be here this year," Soichiro Udo, a 65-year-old security guard working his fourth Halloween since 2019 said.

"I expected that with the coronavirus restrictions lifted, there would be this rush of energy, but that hasn't happened, and I really get the impression there are more people coming to see Halloween than there are people dressing up for it," he added.

Shops and businesses closed early, with the Seibu department store and the Tsutaya bookstore among those in the vicinity of the famous crossing shutting at 8 p.m. Outlets such as the Shibuya Parco mall also put up signs refusing entry to anyone in Halloween garb. 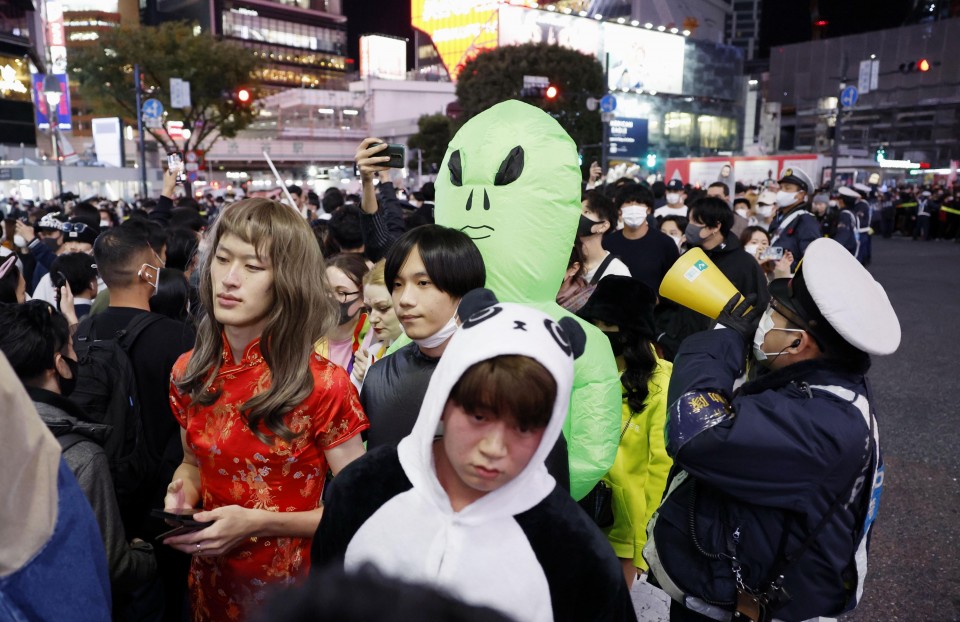 People walk in costume at a scramble intersection in Tokyo's Shibuya area on Halloween on Oct. 31, 2022. (Kyodo) ==Kyodo

Measures against the event's excesses have gathered pace in recent years, with the local government introducing a non-binding ordinance in 2019 to ban outdoor drinking of alcohol in the Halloween period. The ward also requested shops around Shibuya Station refrain from selling alcoholic beverages on Monday.

The restrictions were devised after revelers in 2018 flipped a truck over during celebrations in an official Shibuya Ward Halloween event. No such event was held this year.

The hours before the party got under way also offered a glimpse of the dichotomies of Halloween in one of the capital's most dynamic and youthful districts.

While a soapbox speaker railed against the use of taxpayers' money to foot the bill for an "inconvenience" he blamed on people from outside of the area, a woman in a Pikachu outfit stood a few feet away, holding up a sign saying in search of a Satoshi -- the Japanese name for the Pokemon TV anime series' protagonist.

Excitement was still palpable, however. 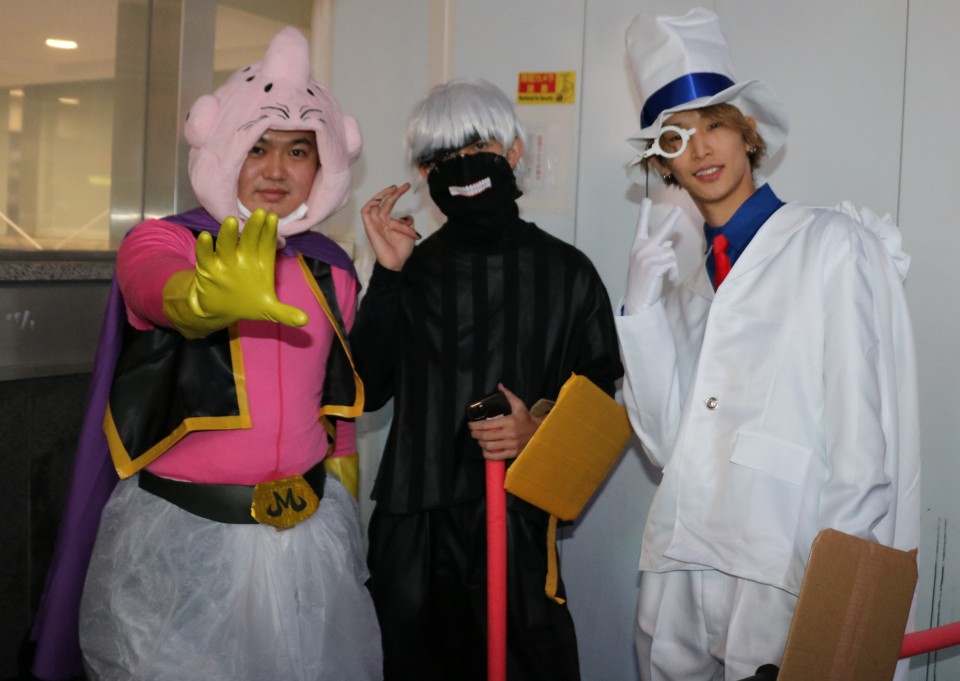 "I let my Instagram followers vote on my outfit, and this was the overwhelming winner," said one man in his 20s from Yokohama dressed in a bunny girl outfit, who was attending his first Shibuya Halloween because "the kinds of thing that don't happen in normal life, they could happen today."

He also revealed he had not changed his opinion on attending after the shocking incident in South Korea, saying, "I don't think Shibuya would be like that, but if it looks like it is going that way, then I'll take care, especially dressed like this."

Some locals even took it upon themselves to help ensure a smooth night, including one man in his 30s who installed himself outside Starbucks with a homemade, illuminated sign urging people not to stop moving. "I didn't want something like what happened in Korea in Tokyo, so I did this wanting people to enjoy Halloween," he said.

Elsewhere, Honoka Ishikawa, a 19-year-old university student, was scouring the streets alone for any trash she could find that had been left behind in the celebrations.

Between picking up stray pieces of garbage, she said, "I thought, I wanted to do something more than dress up, and when I saw on the news that lots of foreigners would come here this year, I felt like I didn't want them to see Japan as dirty."

Tokyo's Shibuya on high alert for return of Halloween crowds