For Kazuo Tachibana, a liquor store owner in Yokohama, the recent widespread price hike on alcohol looks like delivering another blow to a business already taking knocks.

"Customer spending has fallen from earlier this year, and many people seem much more hesitant to shop," the 81-year-old said before thousands of alcoholic and nonalcoholic beverages became dearer by an average of 4 to 13 percent, including the first canned beer price rises in 14 years, on Oct. 1.

Besides familiar factors like rising wheat costs caused by the war in Ukraine, a major exporter of the grain, the jump has been triggered by price hikes on materials like aluminum for cans and higher transportation costs, brewers said. 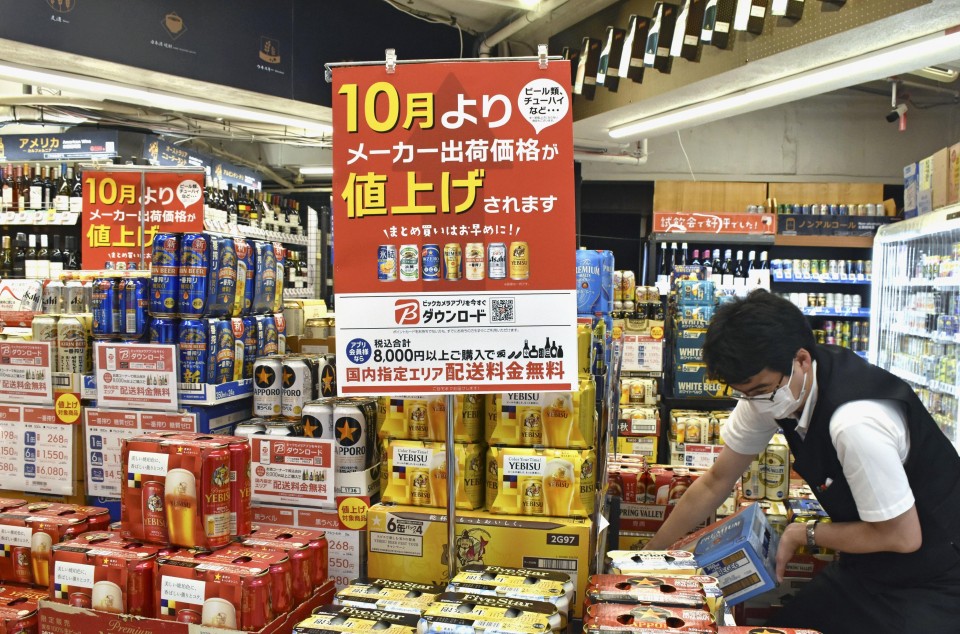 A sign notifying customers of prices rises on alcoholic drinks from October is seen at the alcohol section of a BicCamera in Tokyo's Chiyoda Ward on Sept. 22, 2022. (Kyodo)

For consumers, that means almost all alcoholic options are more expensive than they were. According to a Teikoku Databank survey the same day, 105 major food producers slapped an average 16 percent increase on 6,699 products, with 2,991 of them -- 40 percent -- drinks of the hard and soft varieties.

The price hikes so far in 2022 would cost the average household an extra 70,000 yen ($483) annually if they made the same purchases, a separate Teikoku Databank estimate suggests.

Asahi was the first to promise rises of 7 to 17 percent on 162 products in April, which means a 350 milliliter can of Asahi Super Dry at a convenience store has gone from roughly 219 yen to about 230 to 240 yen.

The three other big alcohol firms followed suit, as did smaller companies like Yoho Brewing Co., maker of the Yona Yona Pale Ale brand, which slapped 10 percent hikes on almost all of its products, and sake brewers such as Hakutsuru Sake Brewing Co., 150 of whose products are now 5 to 10 percent costlier.

But with consumers set to feel the pinch, a survey by Kaku Labo, the market research arm of alcohol seller Kakuyasu, shows drinkers are split on whether they will cut back in response.

In the September survey, 30.5 percent of the 525 respondents said they intend to save on alcohol, while 37.3 percent reported they intend to maintain their habits. Another 29.1 percent said they would decide once the changes come.

When asked what significance alcohol played for them, many who plan to keep drinking as before cited a drink's "essential" stress-busting effects, while others said they did not intend to let the price changes alter their lifestyle habits.

Ryuhei Kaneko, 30, who regularly visits bars in Tokyo's Kanda neighborhood, said he intends to save on food and keep his alcohol spending stable.

"For me, it's about the fun of drinking with others in the bars I like, and meeting new people. I want to keep doing that, no matter how high prices get," he said.

His sentiment on rising costs rang true for Sachiko Inamura from the Nihon Izakaya association for traditional Japanese pubs.

"Customers in Japan don't just want low prices, they want to enjoy being out with others in a space and atmosphere unlike home," she said. "This trend (will be) particularly strong post-pandemic, meaning izakaya Japanese pubs aren't just competing on cost."

Behind the serving counters, owners at the capital's independent drinking establishments saw the latest rises as part of a wider series of issues for an industry trying to recover from the coronavirus's stultifying effect on social activity.

Their unenviable position at the forefront of antiviral measures taken between 2020 and 2022 has included subsidized extended closures, requests not to serve alcohol, and calls to shorten opening hours.

Now, with the capital's last quasi-state of emergency measures having ended in March, establishments have had six months of uninterrupted business activity just as a confluence of factors, including the war in Ukraine, have pushed up costs.

Atsushi Miyata, owner and bartender at whiskey and cocktail bar Brass in Adachi Ward, said he has already bumped prices by 20 percent this year as cost pressures from the weak yen and product shortages have conspired to inflate his spending on imported whiskies and other drinks. 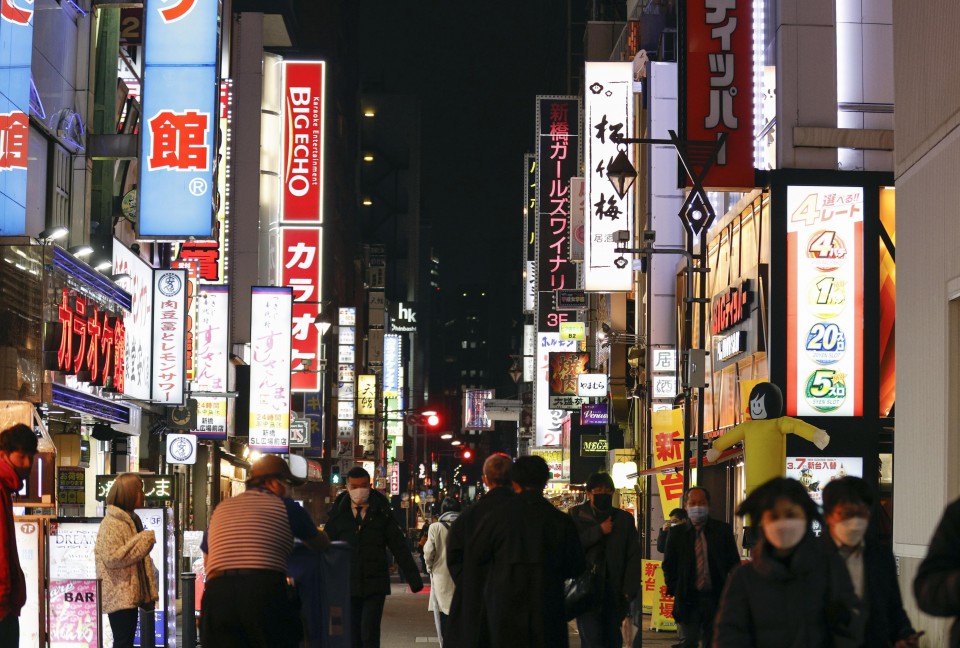 People walk down a street at night in Tokyo's Shimbashi neighborhood on March 22, 2022. (Kyodo)

"Some whiskies I would procure at 3,000 yen, I now pay about 5,500 yen for. If prices keep rising, we have to raise ours again, but you can't do that repeatedly in the same year, so it's also a question of when to do it," he said.

Yokohama alcohol seller Tachibana, too, said his shop's prices had already been dragged upward before the formalized hikes thanks to rising fuel costs affecting imported wine and beer.

The 44-year-old proprietor of another standing bar in Kanda cited the long-term lifestyle effects of the coronavirus as his greatest concern. He said his business sees about two-thirds of the customers it did pre-pandemic.

"Fewer people commute in Kanda now. A lot of my regular customers work from home outside Tokyo most of the time, and are in the area maybe once or twice a week," he said.

Tokyo metropolitan government data comparing transient populations in major entertainment districts Ginza, Roppongi, Kabukicho and Ikebukuro to their presence in pre-pandemic January 2020 shows only a gradual trend back to activity levels before the coronavirus. Results from Sept. 26 to Oct. 2 indicate people traffic between 18 and 25 percent below pre-pandemic levels.

The proprietor added he has noticed a rise in customers in their early 20s, a stark contrast to the low numbers in their late 20s and early 30s. "I think many of the youngest ones, who've spent the last few years at university stuck inside because of coronavirus, are more likely to want to enjoy being out," he said.

From his perspective on Tokyo's outskirts, Miyata said his bar has largely recovered its pre-pandemic customer allure, thanks also to a generational shift. "Of course, since we reopened, I noticed some people weren't coming back, but I see many more new customers, especially young groups."