Japanese opposition parties on Wednesday stepped up their offensive against Prime Minister Fumio Kishida, who has been involved in several controversies, including his ruling party's suspicious ties with the dubious Unification Church and apparent favoritism toward his son.

During the first full-ledged parliamentary debate since Kishida reshuffled his Cabinet in August, the premier refused a call by the opposition bloc to replace a Cabinet member with questionable ties to the religious group.

Kishida claimed that the recent appointment of his eldest son, a former employee of Japan's Mitsui & Co. in his 30s, as an executive secretary to the prime minister was decided based on the idea of "putting the right person in the right place." 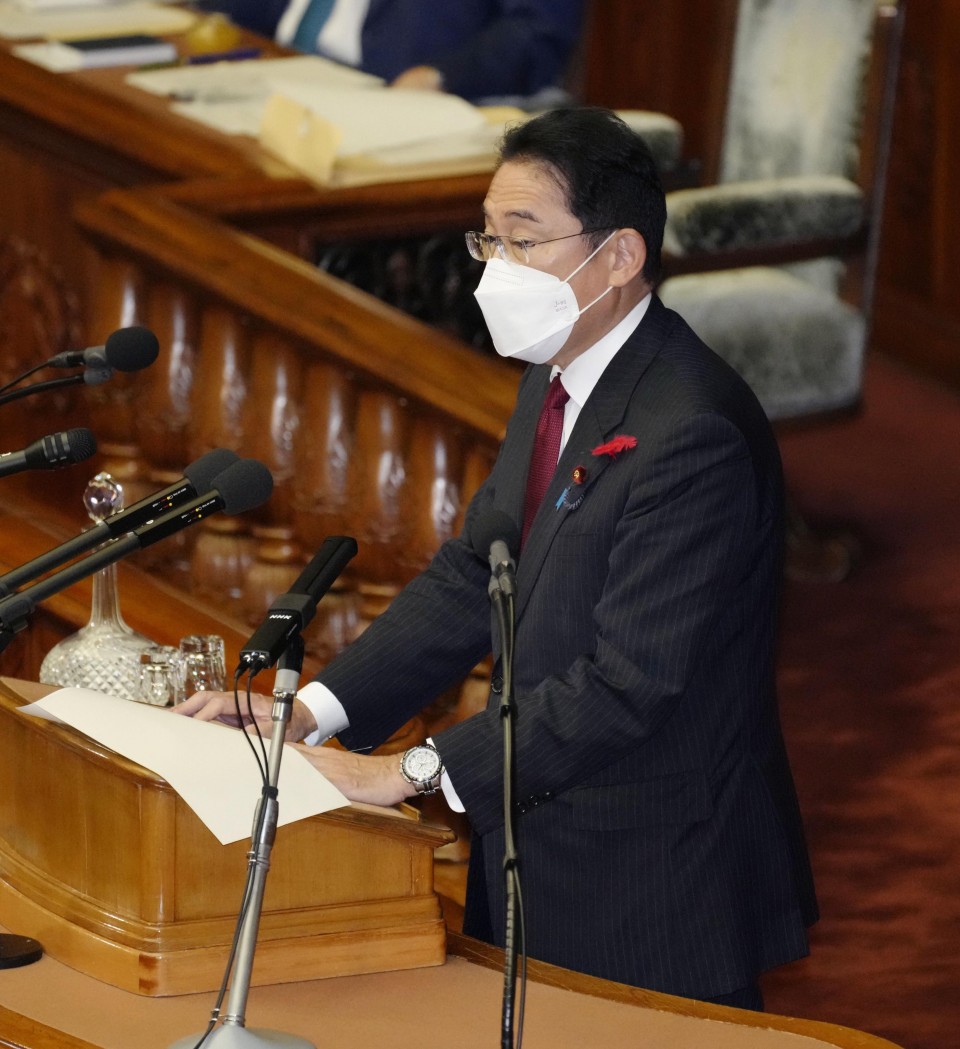 The premier also pledged to thoroughly impose sanctions on North Korea, which fired a ballistic missile that crossed over Japan for the first time in five years.

Kenta Izumi, leader of the main opposition Constitutional Democratic Party of Japan, urged the prime minister to dismiss economic minister Daishiro Yamagiwa, who has been under fire for fallacious explanations about his links to the Unification Church.

Kishida said Yamagiwa has admitted his connections with the religious group and vowed to sever ties with the organization. The prime minister has also asked that he continue giving a satisfactory explanation about the issue that has triggered a plunge in the Cabinet's public support ratings.

"To restore public trust, we will take adequate measures" so that lawmakers of the Liberal Democratic Party across the country will "never have connections" with the group, Kishida said.

In response to an opposition lawmaker's question in parliament, Yamagiwa said he has attended events hosted by the Unification Church and its affiliated groups, adding he has "sincerely reflected on" his past behavior.

The religious organization, now formally known as the Family Federation for World Peace and Unification, was established by a staunch anti-communist in South Korea in 1954.

Connections between members of the LDP, headed by Kishida, and the Unification Church have come under scrutiny, sparking concern that the contentious group may have sought to exert political influence by deepening relations with ruling party lawmakers.

The results of an internal investigation released last month showed around half of the LDP lawmakers had some connection with the organization.

The extraordinary Diet session began Monday as Kishida has faced a series of setbacks, including the Unification Church issue and a controversial state funeral for former premier Shinzo Abe, who was fatally shot during an election campaign speech in July.

The Unification Church has come under the spotlight after the gunman who killed Abe reportedly said he harbored a grudge against the group and targeted the former leader, who appeared in a video message aired at an event held by a group affiliated with the organization in 2021.

Abe's attacker, Tetsuya Yamagami, was also quoted by investigative sources as saying his mother's substantial donations to the group ruined his family's finances.

In August, Kishida reshuffled his Cabinet to replace ministers who were confirmed to have some relationship with the Unification Church. Yamagiwa, who was first picked as a minister last year, remained in his post as he did not elaborate on his ties with the church.

Approval ratings for Kishida's Cabinet were relatively high for around 10 months since he took office in October 2021. However, the Unification Church matter has caused his government's popularity to take a substantial hit.

On Wednesday, meanwhile, the House of Representatives adopted a resolution protesting North Korea's latest ballistic missile launch, describing it as a "grave and imminent threat" and "totally unacceptable."

On Tuesday, North Korea fired a ballistic missile that flew 4,600 kilometers, reaching the longest distance ever for a missile launched by Pyongyang.

At parliament, Kishida expressed his willingness to resolve the long-standing issue of abductions of Japanese nationals by North Korea in the 1970s and 1980s while stressing his readiness to hold talks with leader Kim Jong Un.

Kishida's predecessors, Abe and Yoshihide Suga reiterated similar claims, but a summit between Japan and North Korea has not been held for more than 20 years.

As for Abe's event in late September, the first of its kind for a former prime minister in 55 years, opposition lawmakers have argued that there was no legal basis for holding such a ceremony funded by taxpayer money.

Kishida said at parliament that his government will consider guidelines for state funerals for former prime ministers.

In another development, the LDP would sound out former Prime Minister Yoshihiko Noda, Abe's immediate predecessor in his second term as premier, for delivering a memorial speech at the ongoing parliamentary session.

The LDP had initially proposed former economic minister Akira Amari, a close aide to Abe, play the role in the previous Diet session. But the party decided to forgo the plan amid mounting criticism of Amari over allegations of graft.