A state funeral for former Prime Minister Shinzo Abe was held in Tokyo on Tuesday despite strong opposition to the controversial ceremony for the country's longest-serving leader, with more than 4,000 mourners attending the rare event amid tight security.

Ahead of the state-funded event, the first of its kind for a former premier in 55 years, calls for its cancellation had grown. Critics say it lacks a legal basis, citing Abe's complicated political legacy for their opposition.

Abe built his profile overseas by emphasizing foreign and security policy while forging personal ties with world leaders such as former U.S. President Donald Trump. At home, however, opinion on his legacy is divided based on allegations he abused his power for personal gain. 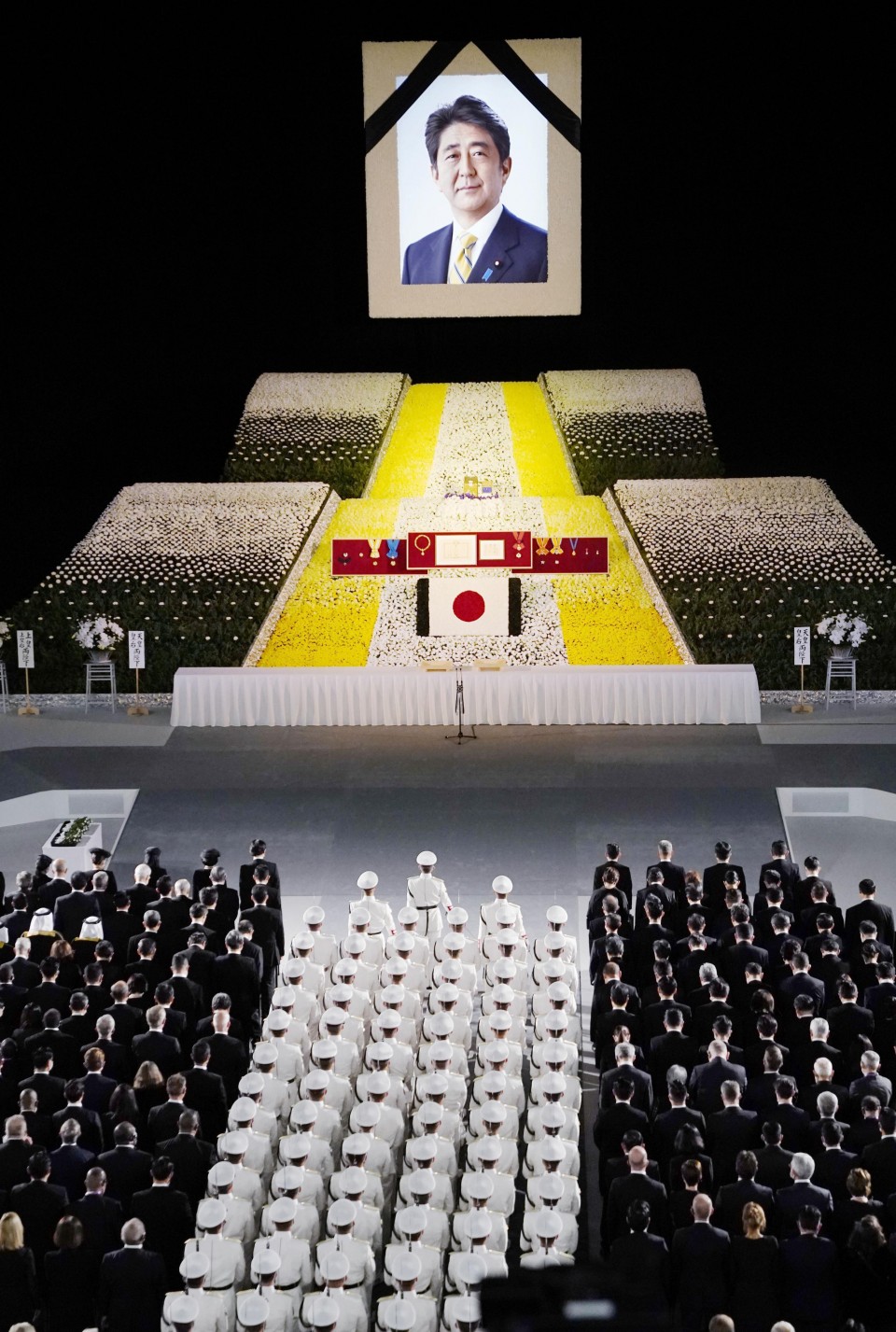 During the postwar period, Japan had only hosted a state funeral for a former premier once. The honor was given in 1967 to former Prime Minister Shigeru Yoshida, who led the country's recovery from World War II.

A private funeral for Abe was held four days after he was fatally shot during an election campaign speech on July 8 in the western city of Nara by a lone gunman. His remains were cremated.

The National Police Agency has mobilized up to 20,000 officers to enforce strict security in the capital, particularly around the Nippon Budokan hall where the ceremony was held.

At a park near the venue, meanwhile, large numbers of people gathered to lay flowers from early in the morning.

Opponents of the funeral have repeatedly held rallies in front of the prime minister's office, parliament building and elsewhere and filed lawsuits demanding that the event be scrapped.

Earlier this month, a man set himself on fire on a street near the prime minister's office, police said, apparently intending to commit suicide in protest against the planned state funeral. 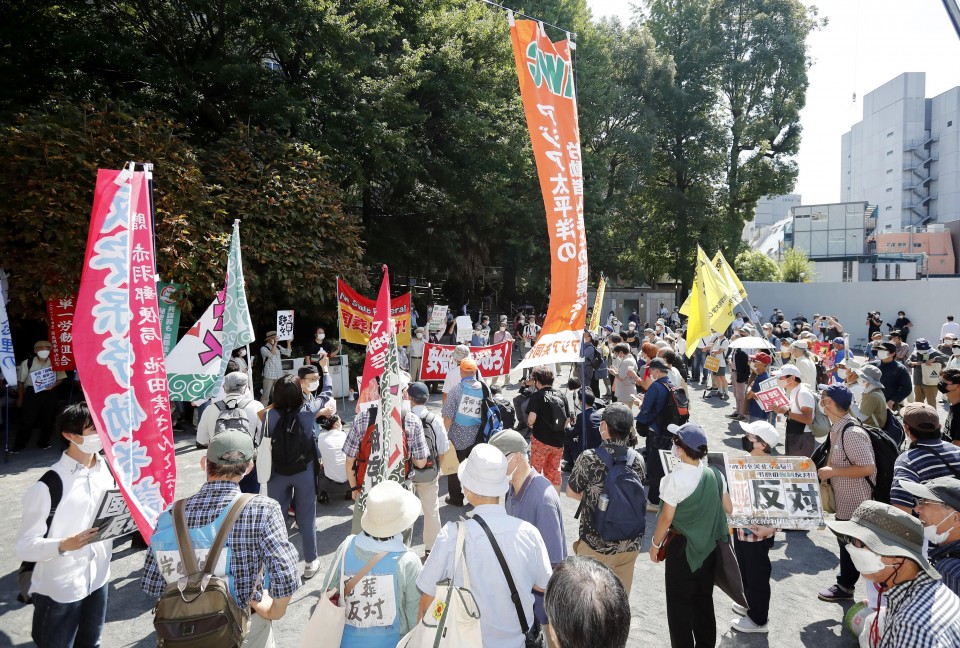 The funeral is set to cost taxpayers more than 1.6 billion yen ($11 million).

During the service that started around 2 p.m., Prime Minister Fumio Kishida and his predecessor Yoshihide Suga gave memorial addresses.

In a speech after video footage of Abe's life was played in the venue, Kishida offered condolences, expressing his "most profound regret" about the circumstances of his death.

The prime minister recognized the former leader's achievements in "markedly" strengthening Japan-U.S. ties, proposing a security framework involving the two countries plus Australia and India called the "Quad," and promoting a "free and open Indo-Pacific."

Kishida, who was elected to parliament in the same year as Abe, also promised to carry on Abe's mission of bringing about the return of Japanese nationals abducted by North Korea in the 1970s and 1980s, saying he will "do everything in my power" to realize the goal.

Suga, who supported Abe for over seven years as chief Cabinet secretary, said he persuaded Abe to stage his comeback as Japan's leader in 2012. 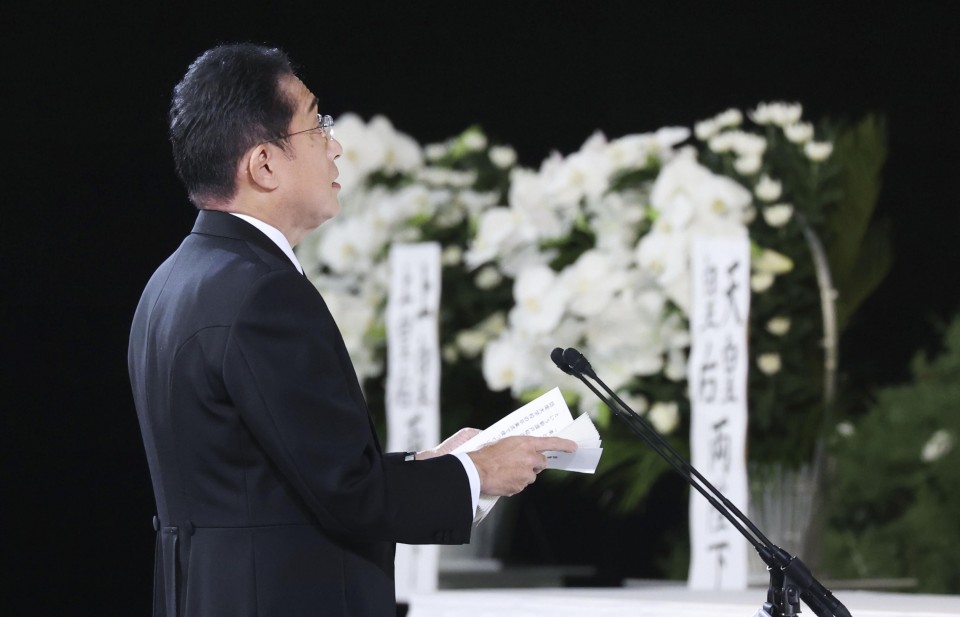 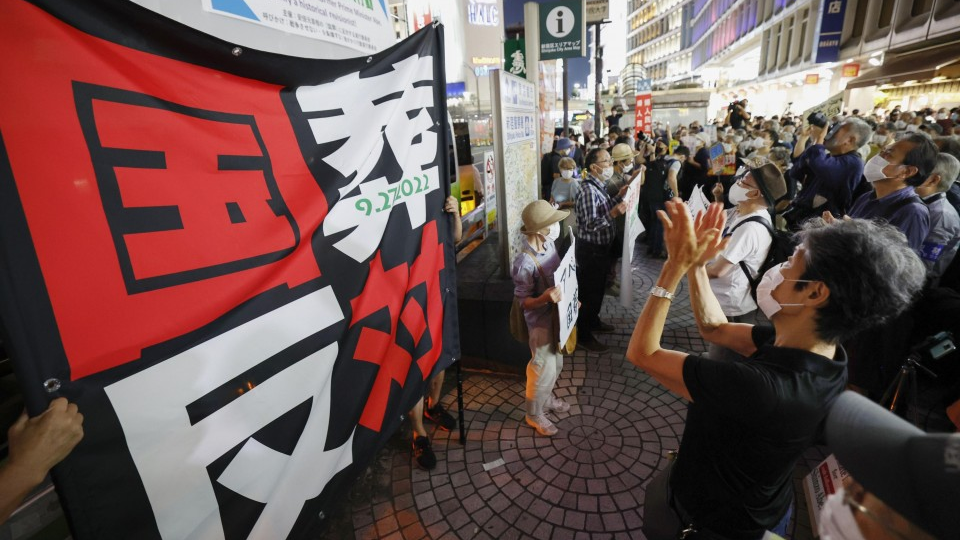 All the guests, who were required by the Japanese government to wear protective face masks to curb the spread of the novel coronavirus, laid flowers on a table below Abe's portrait.

A car carrying Abe's cremated remains arrived at the venue from his family home after stopping by the Defense Ministry, which was upgraded from an agency in 2007 during his first stint as premier that lasted for around one year from 2006.

Abe, who became prime minister again from 2012 to 2020, made efforts to revise Japan's war-renouncing Constitution to clarify the legal status of the Self-Defense Forces, a goal that he was unable to achieve.

With the funeral splitting public opinion, some opposition parties boycotted the service. But Yoshihiko Noda, an opposition lawmaker who was Abe's immediate predecessor in his second term as prime minister, joined the state funeral. 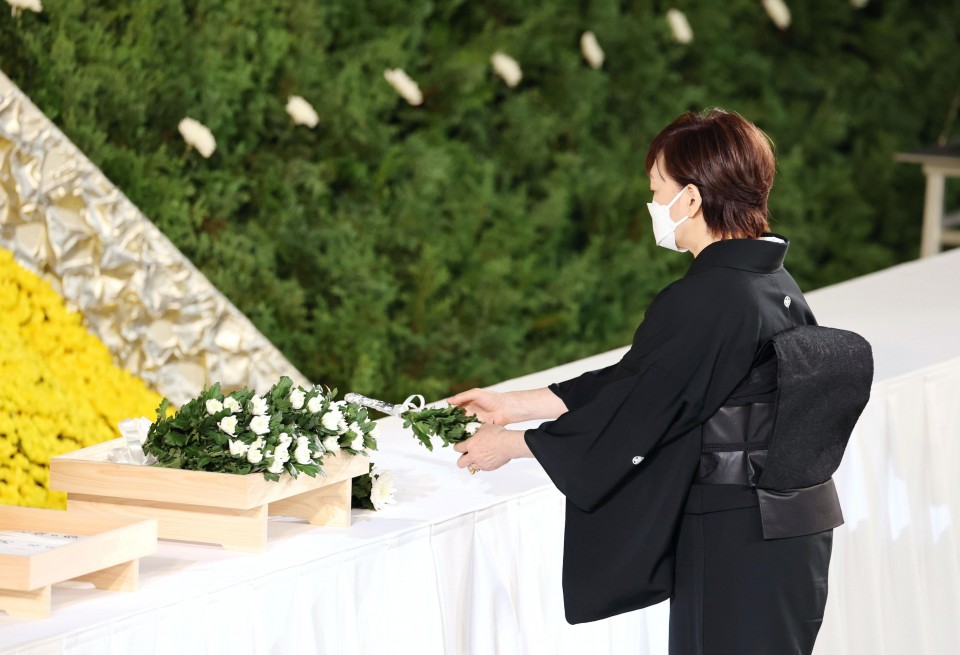 Opposition lawmakers have argued there is no legal basis for staging a state funeral for a former prime minister, while questions have also arisen about how much the event will ultimately cost.

Funerals for past premiers after Yoshida were mainly held jointly by the government and the ruling Liberal Democratic Party, which has been in power almost continuously since its establishment in 1955. The funeral expenses were shared between them.

Kazuo Shii, leader of the opposition Japanese Communist Party, lambasted the Kishida administration, telling reporters later Tuesday, "We can never overlook the problem of pushing ahead with the unconstitutional state funeral."

Kishida cited Abe's longevity in office -- over eight years in total -- as one of the reasons for holding the state funeral. But political experts say his legacy is contentious, especially in light of a series of favoritism allegations and other scandals that came to light when he was in power.

Dubious ties between the Unification Church, a religious group often labeled as a cult, and the LDP that Abe headed have also affected public support for the funeral.

Abe's attacker, Tetsuya Yamagami, reportedly said he harbored a grudge against the organization and targeted Abe for his perceived ties to it. In 2021, Abe appeared in a video message aired at an event held by a Unification Church-affiliated group. 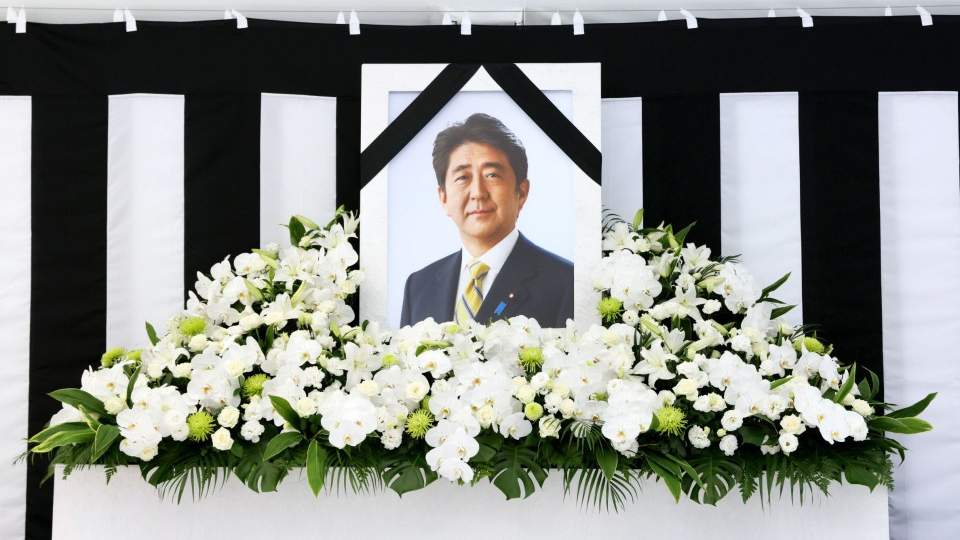 A photo of former Japanese Prime Minister Shinzo Abe is displayed at a stand set up in Tokyo for the general public to lay tribute flowers on Sept. 27, 2022, near the venue of his state funeral. (Pool photo)(Kyodo)

The following is a chronology of major events in the political career of Japan's former Prime Minister Shinzo Abe whose state funeral was held on Tuesday.

Sept. 12, 2007 -- Announces intention to resign as prime minister due to health problems.

May 3, 2017 -- Unveils plan to seek amendment of Japan's pacifist Constitution.

Aug. 28 -- Announces resignation as prime minister due to flare-up of his disease.

July 8, 2022 -- Dies after being attacked by gunman during election campaign in Nara Prefecture. 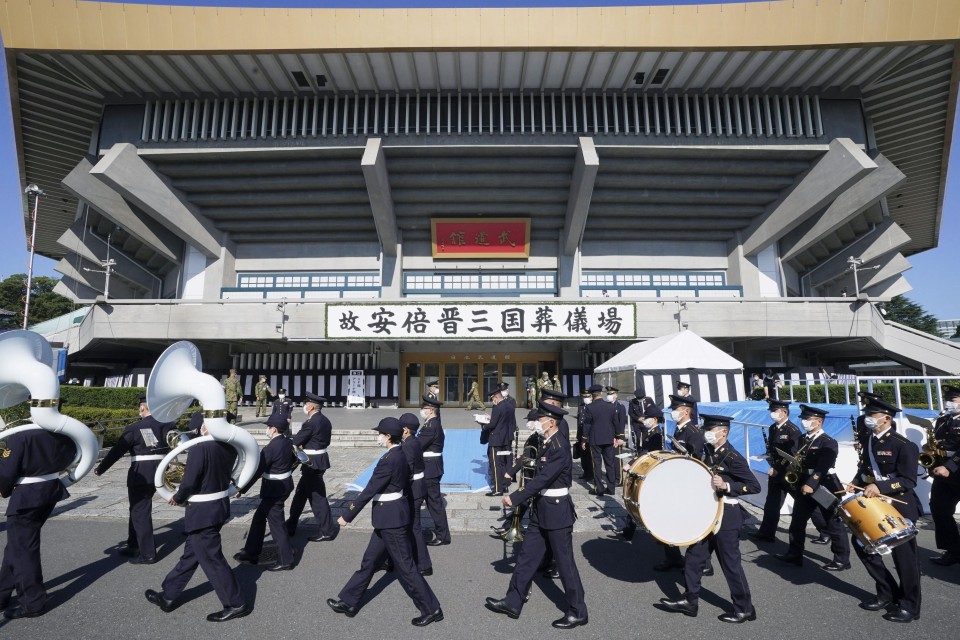 Self-Defense Force music band members take part in a rehearsal for the planned state funeral for slain former Japanese Prime Minister Shinzo Abe at the Nippon Budokan hall in Tokyo on Sept. 26, 2022, the eve of the ceremony. (Kyodo) ==Kyodo