While Japan and the United States recently agreed to coordinate in building a new rules-based economic order in the Indo-Pacific region to counter China's growing clout, whether the framework can prosper and remain effective largely depends on its members gaining concrete benefits, analysts said.

The U.S.-led Indo-Pacific Economic Framework is expected to have a significant impact on the fast-growing region as it will re-establish the United States as an economic and geostrategic leader after its pullback from the Trans-Pacific Partnership trade deal under former President Donald Trump. 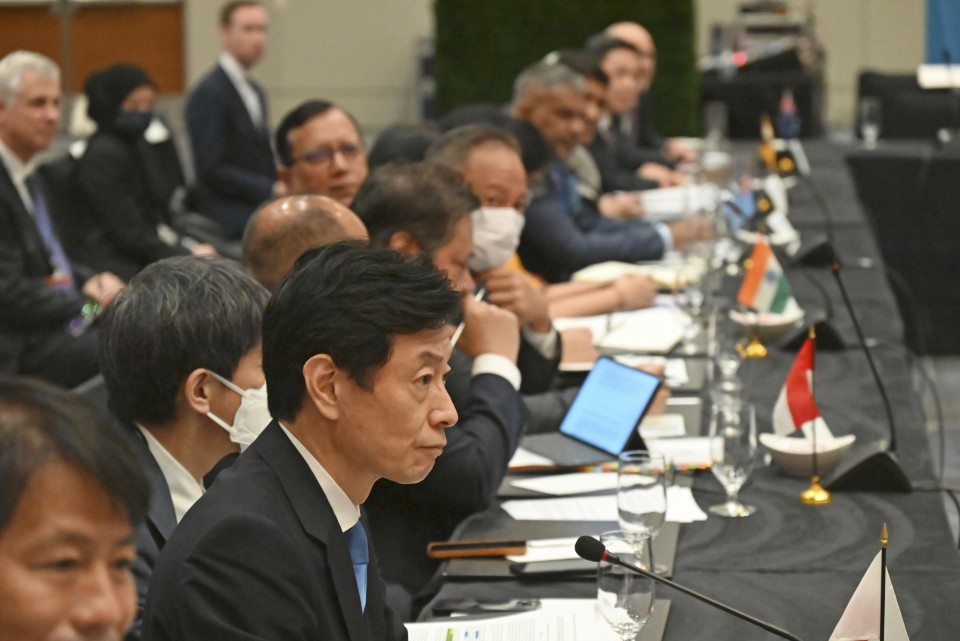 "It could be an effective mechanism or platform to counter China's growing influence both economically and geopolitically in the region," Brian Peck, executive director of the Center for Transnational Law and Business at the University of Southern California in Los Angeles, told Kyodo News in an interview.

"Japan is already committed to high-level standards for digital trade and e-commerce so it can be a leader and an example of what can be accomplished (for emerging nation members)," Peck said, adding Japan can lead alongside the United States due to its close ties to Washington and advanced technologies.

Beijing is increasing its economic presence across the region as a member of the Regional Comprehensive Economic Partnership Agreement and its influence could grow further if it is granted membership to the Comprehensive and Progressive Agreement for Trans-Pacific Partnership, for example.

However, the United States is not a member of the CPTPP nor RCEP, and there have been voices among Association of South East Asian Nations members urging Washington to re-engage economically in the Indo-Pacific region due to concern over China's economic coercion.

Despite Japan along with the United States and other like-minded nations actively promoting a free and open Indo-Pacific strategy, critics said their efforts lack an economic aspect.

Nishimura stressed at the press conference that IPEF will push forward economic measures as part of the strategy.

Political and economic experts said it is crucial the framework has a diverse membership to become an effective counterweight to China's growing assertiveness.

"So, the important thing now is to keep them on board and make sure no one will be left out," a Japanese Foreign Ministry official said, adding it is not an easy task because each country has its own unique circumstances.

Japan can bridge the gaps between the United States and developing countries, sometimes nudging one side into compromise and giving the other tips and advice, according to the official.

At the two-day talks in Los Angeles last week, ministers from the 14 member countries, including both developed and developing nations, agreed to enter into formal negotiations aimed at establishing a new rules-based economic order after discussing a range of issues including tangible benefits available outside trade liberalization.

"If there is no tangible benefit, then I don't think members will stay cohesive," said Stephen Nagy, a senior associate professor at International Christian University in Tokyo.

Since IPEF is not a conventional trade agreement, there was initial doubt ASEAN nations would participate as it appeared there was little merit for them in joining when market access was off the table.

However, seven of the 10 ASEAN members have joined the U.S.-led framework since its launch in May during a trip to Japan by U.S. President Joe Biden, and now the launch is viewed as a success, Koichi Ishikawa, a research fellow at the Institute of Asian Studies at Asia University in Japan, believes.

"Going forward, Japan and the U.S. need to focus on matching their interests with the interests of IPEF member states and potential members," Nagy said.

"Here, inclusive development and climate change mitigation are areas where Tokyo and Washington could get regional buy-in with Pacific Island states, Bangladesh and other countries and regions facing development and environmental challenges," he said.

The area of clean energy, decarbonization and infrastructure is one of the four main policy pillars of IPEF. The other three are -- fair trade including the digital economy, supply chain resilience, as well as tax and anti-corruption.

Nishimura told reporters that Japan can assist other members, especially those in Southeast Asia and Pacific island nations, in the field of new energy technology such as those utilizing hydrogen and ammonia, as well as the nascent field of carbon capture, utilization and storage.

Meanwhile, in response to skepticism about the initiative's value to participating countries, the United States has announced the launch of digital skill training program targeting women and girls joined by 14 U.S. firms including tech giants Apple Inc. and Google LLC.

"The contribution of this initiative has the potential to be actually immeasurably valuable. And the impact will be felt today and in decades to come," Koya said.

While the U.S. upskilling initiative is regarded as a potential concrete benefit under IPEF, Nagy also said U.S. policy should remain steadfast in the future.

The United States had led negotiations for the TPP trade agreement under former President Barack Obama, but his successor, Trump, withdrew the world's largest economy from it, leading to the creation of the CPTPP.

With the possibility of China trying to fracture unity by offering incentives to in-need members, proposing more aid with fewer strings, for example, it would be really difficult for IPEF to maintain any momentum without the determined leadership of the United States, regardless of whether it is a Democratic administration or Republican administration, he said.