Defense Minister Yasukazu Hamada and Okinawa Gov. Denny Tamaki on Wednesday failed to make concessions on a plan to relocate a key U.S. base within the island prefecture.

During their first talks since Hamada became defense minister in August, Tamaki urged the central government to scrap the plan to move U.S. Marine Corps Air Station Futenma from the densely populated city of Ginowan to the less populated coastal area of Henoko in Nago. 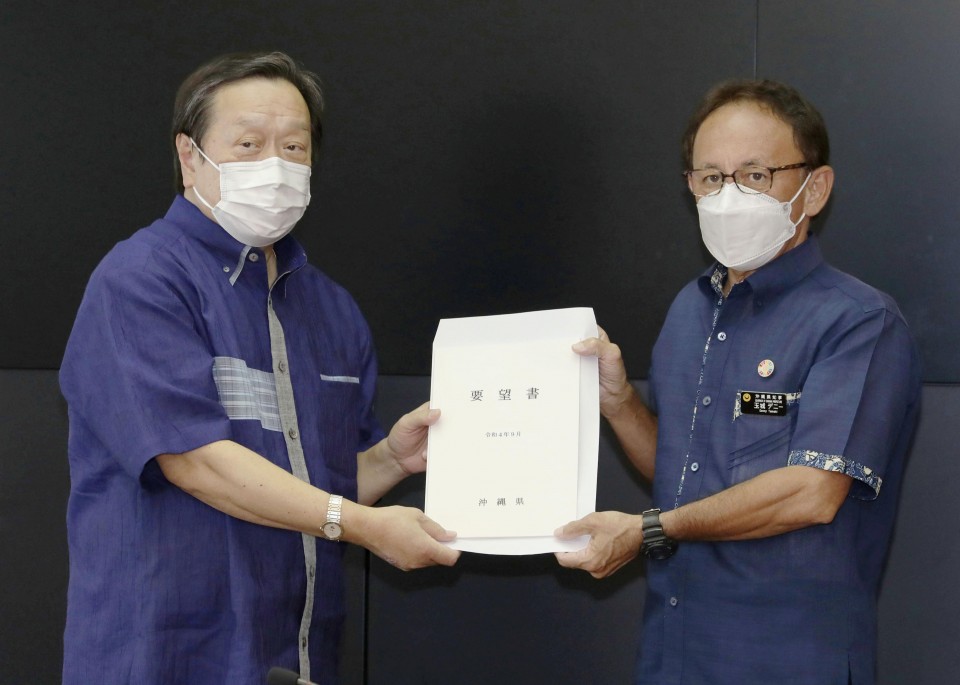 Hamada told Tamaki, known as a vocal opponent of U.S. bases in Okinawa, the government of Prime Minister Fumio Kishida will push ahead with the relocation plan, which Tokyo and Washington agreed upon in 1996.

Tamaki won a second four-year term as governor following the Sept. 11 gubernatorial election, while Hamada made his first trip to Okinawa since he took office.

Hamada said in the meeting with Tamaki that the relocation plan is the "only solution" to maintain the deterrence of the long-standing Japan-U.S. security alliance and alleviate the burden on Okinawa, which hosts the bulk of U.S. bases in Japan.

Tamaki asked the central government to seek a solution through dialogue with the people of Okinawa.

The governor has long said Okinawa bears an unreasonable burden by hosting U.S. military facilities. Okinawa is home to 70 percent of the total acreage exclusively used by U.S. military installations in Japan. The prefecture was returned to Japan from U.S. control half a century ago.

In a prefectural referendum in 2019, more than 70 percent of voters rejected the relocation plan, although the result was not binding on the central government.