Japanese Prime Minister Fumio Kishida is expected to struggle to secure a stable political base after holding a controversial state funeral for former leader Shinzo Abe on Tuesday despite strong opposition from the public.

Several other issues, including suspicious relations between ruling lawmakers and a notorious religious group, the Unification Church, as well as price hikes that have been weighing on consumer and business confidence, have also hurt the popularity of Kishida's government.

Kishida, who took office in October 2021, managed to maintain relatively high approval ratings for his administration. However, his political maneuvering has been under fire since the death of Abe, who was fatally shot during an election campaign speech in July. 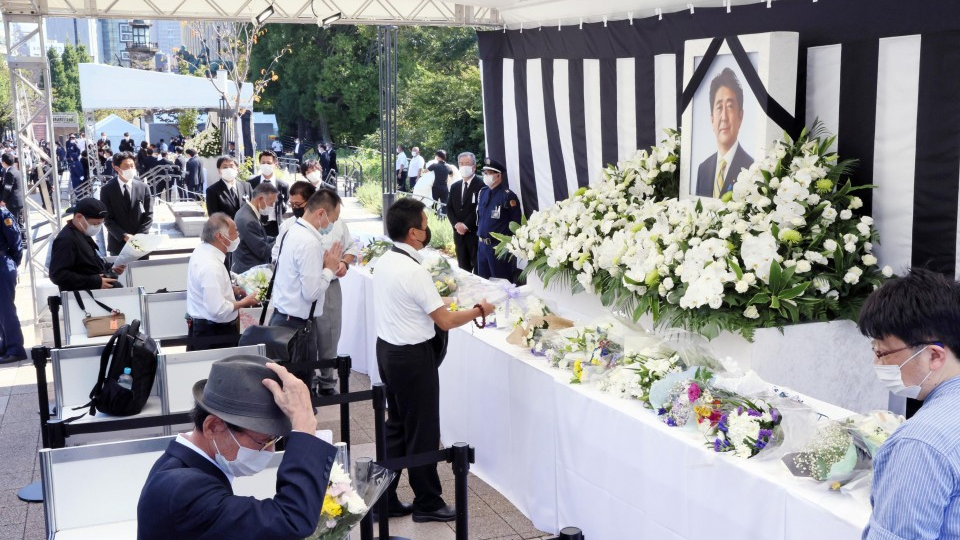 People offer flowers at a stand set up at a park in Tokyo on Sept. 27, 2022, to pay their respects to slain former Japanese Prime Minister Shinzo Abe as his state funeral is set to take place at the nearby Nippon Budokan hall later in the day. (Pool photo) (Kyodo) ==Kyodo 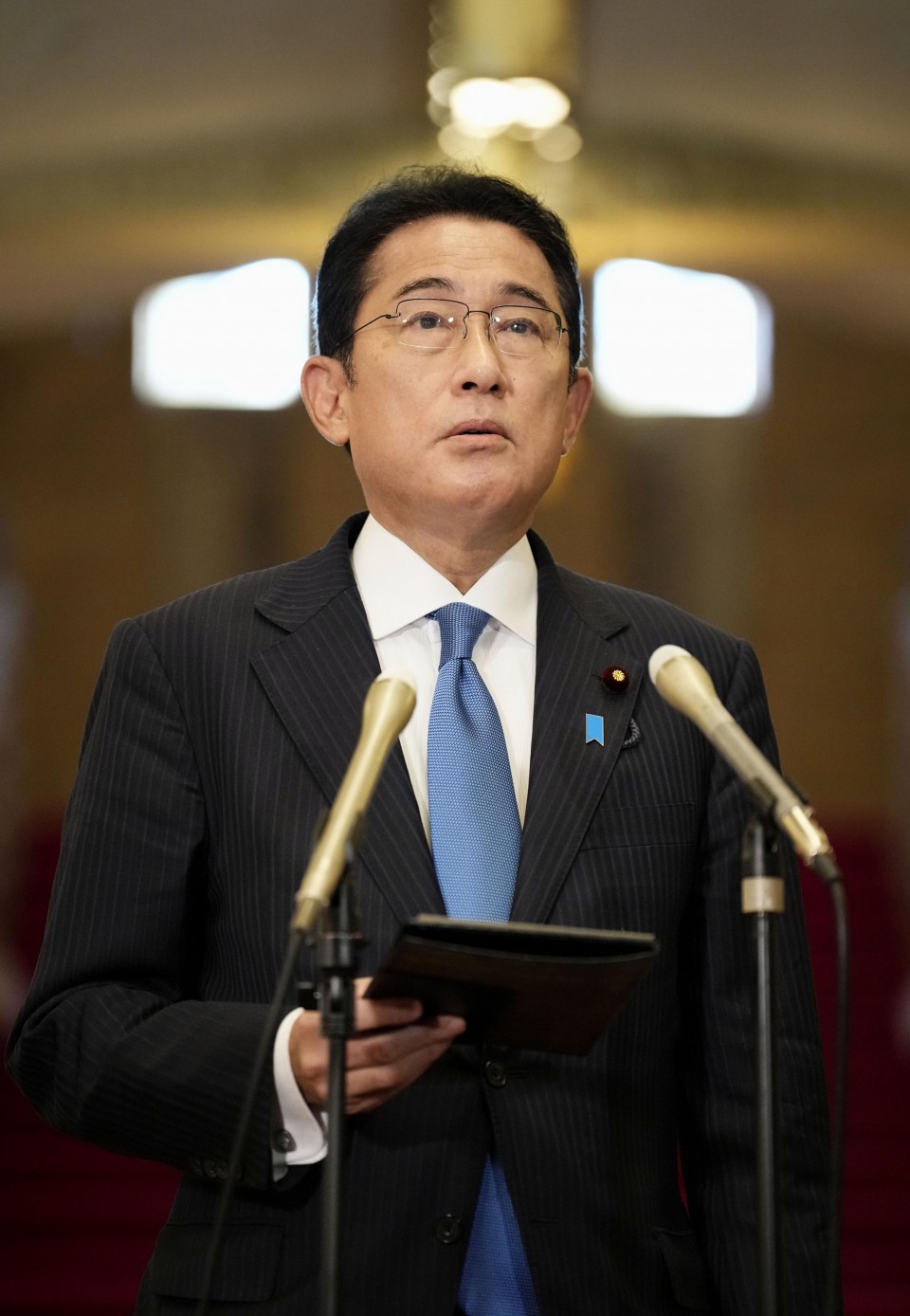 Criticism of Kishida's hasty decision to host Abe's state funeral grew as the current premier failed to explain on what legal grounds the Cabinet can decide to hold the ceremony at its discretion and how much taxpayer money would be used for the event.

Kishida's apparent attempt to avoid a full debate on the matter with the opposition bloc at parliament also increased public distrust of him. Recently, the support rating for the government has been nearing what is widely seen as the "danger level" of 30 percent.

If he cannot take adequate steps to tackle rising prices and end ties between lawmakers of his ruling Liberal Democratic Party and the Unification Church, often labeled as a cult, Kishida is set to become more unpopular, political experts said.

The LDP's major victory in the July 10 House of Councillors election seemed to have promised Kishida a firm government for what has been dubbed his "golden three years" free of national elections unless he dissolves the House of Representatives.

But such a rosy future is unlikely, and Kishida may be compelled to dissolve the lower house for an election in a desperate bid to restore his political strength, although it is uncertain whether the gamble would bear fruit, the experts said.

Abe was well known for his conservative and hawkish security views, while Kishida is one of the more liberal-leaning politicians in the LDP. Kishida is believed to have swiftly decided to host Abe's state funeral to garner support from conservative lawmakers.

Hiroshi Shiratori, a political science professor at Hosei University, said Kishida, who heads the ruling party's fourth-largest faction, strived to consolidate a power base within the LDP by pleasing members of its biggest faction, which Abe led.

Kishida "tried to show his leadership by holding the state funeral, but his attempt turned out to be a failure as criticism emerged not only from many opposition parties but also among the LDP," Shiratori said. 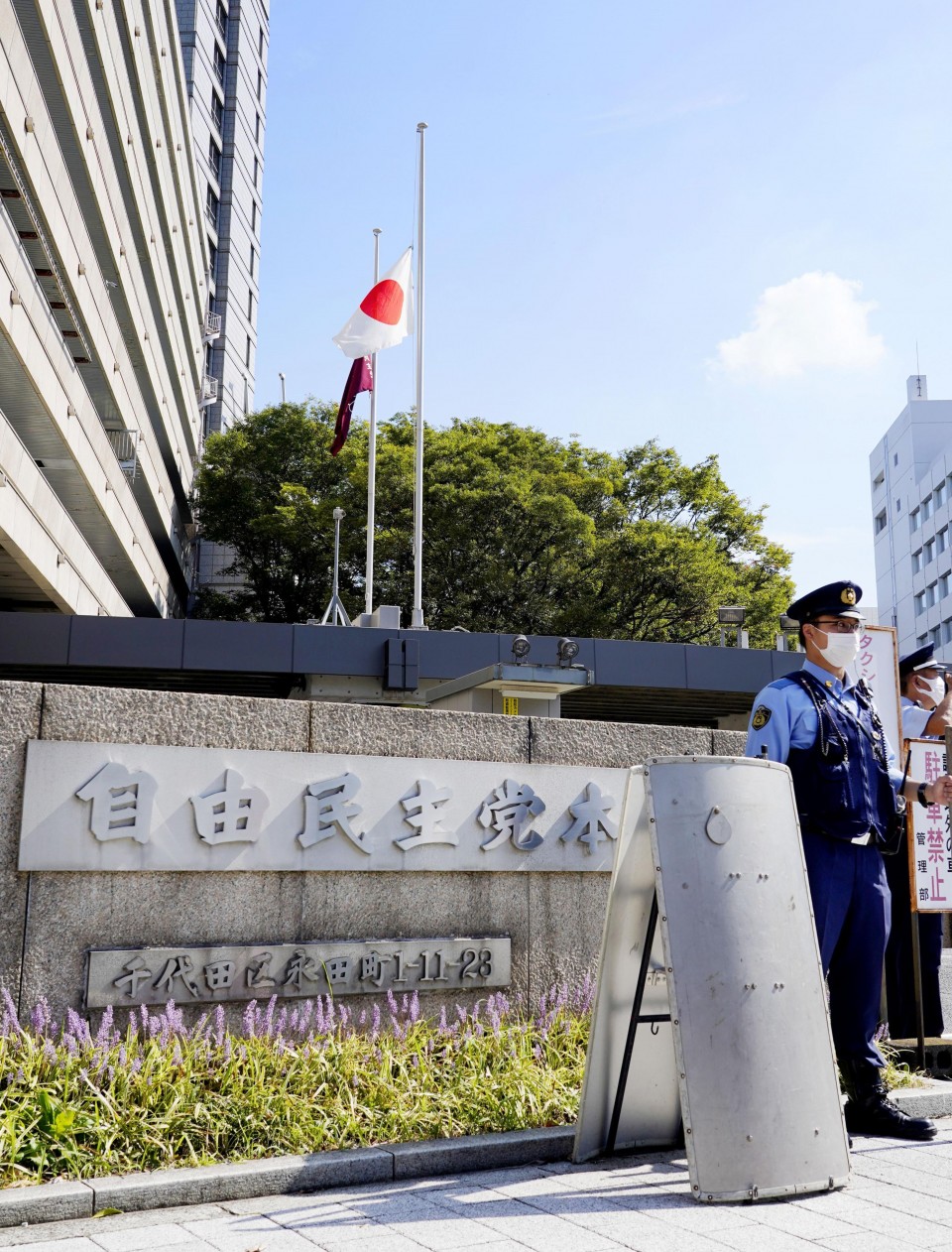 The Japanese flag is flown at half-mast at the ruling Liberal Democratic Party's headquarters building in Tokyo on Sept. 27, 2022. The state funeral of slain former Japanese Prime Minister Shinzo Abe will be held later in the day. (Kyodo) ==Kyodo

Abe's state-sponsored ceremony is only the second for a former prime minister in the postwar period following one for Shigeru Yoshida, who in 1951 signed the San Francisco Peace Treaty, allowing Japan to regain its sovereignty.

Still, holding a state funeral for a former premier in Japan has no legal basis. The government, meanwhile, has estimated allocating over 1.6 billion yen ($11 million) of taxpayer money for Abe's state funeral, but the total cost could balloon in the end.

Kishida claimed Abe's ceremony could serve as an important opportunity for "funeral diplomacy," bringing international dignitaries together in Tokyo.

Abe's event, however, did not play such a role as only a limited number of incumbent foreign leaders traveled to Japan, in contrast to Queen Elizabeth II's state funeral in Britain earlier this month, which some 500 world figures attended.

In addition to the state funeral, the Unification Church issue has dealt a heavy blow to the Kishida administration since Abe was killed.

Abe was targeted due to his perceived links to the religious group founded in South Korea in 1954 by a staunch anti-communist. The assailant, Tetsuya Yamagami, reportedly said his mother's substantial donations to the church ruined his family's finances.

In 2021, Abe appeared in a video message aired at an event held by an affiliated organization of the Unification Church, now formally known as the Family Federation for World Peace and Unification.

Around half of the LDP's lawmakers have been connected with the Unification Church, including having received support in past election campaigns, sparking fears that the contentious group may have exerted some influence in the political arena.

Recent opinion polls conducted by Kyodo News showed the support rating for Kishida's Cabinet tumbled to about 40 percent, the lowest since he became prime minister.

The plunge in the popularity of Kishida is also attributed to mounting public frustration stemming from price hikes without wage growth.

Global food and energy prices have spiked in the wake of Russia's invasion of Ukraine in February, dragging down Japan's resource-poor economy, while the yen's rapid depreciation has been driving up import costs.

All eyes are on whether Kishida can hammer out measures to ease the negative impact of rising prices at home, as many Japanese companies are planning to raise prices to offset their costs in October, immediately after Abe's state funeral.

Hidenori Suezawa, financial market and fiscal analyst at SMBC Nikko Securities Inc., said price hikes are "expected to continue" for the time being against a backdrop of the weaker yen, which could darken the prospects for Kishida's government.

Hosei's Shiratori said Kishida "may be forced to dissolve the lower house sometime after his support rate falls below the 30 percent level," adding his administration cannot survive. 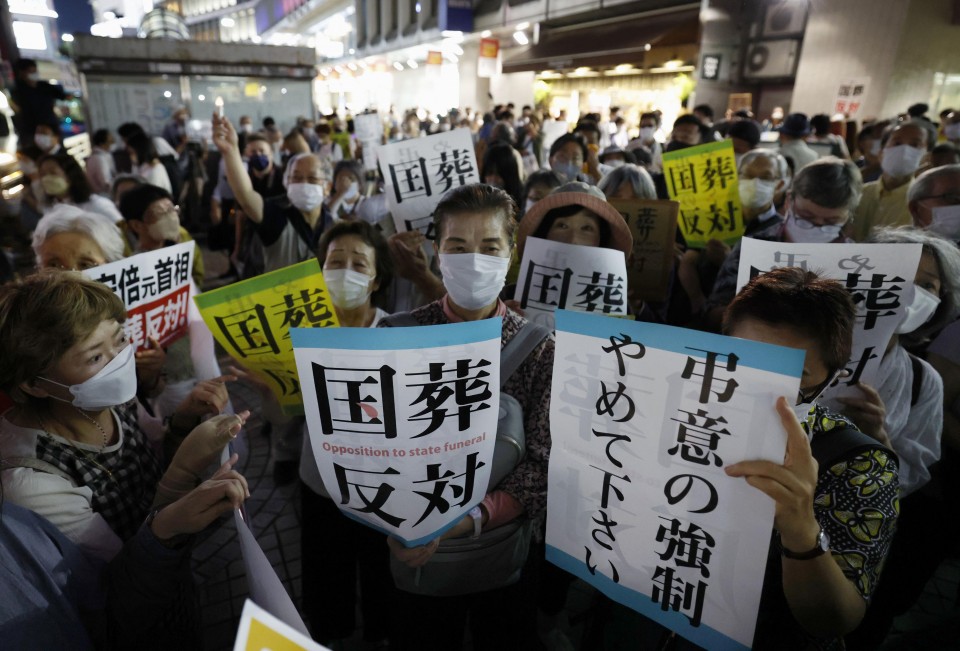 Demonstrators hold signs during a protest against the planned state funeral for slain former Japanese Prime Minister Shinzo Abe in front of Tokyo's JR Shinjuku Station on Sept. 26, 2022, the eve of the ceremony. (Kyodo) ==Kyodo