During their meeting in Tokyo, Hayashi and Guterres also agreed on the importance of easing tensions, according to the Japanese Foreign Ministry, with Beijing having commenced the exercises Thursday in response to U.S. House Speaker Nancy Pelosi's visit to the self-ruled democratic island last week.

Pelosi visited Taiwan, defying warnings from China which views the island as a breakaway province that must eventually be brought under Beijing's control, by force if necessary. 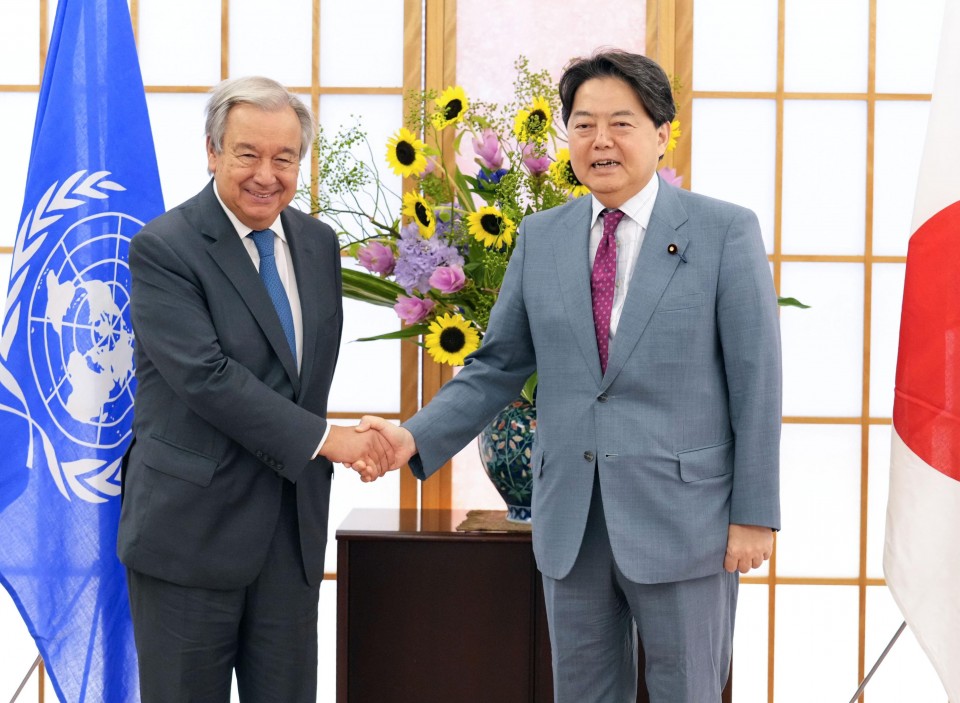 The Chinese military said Monday it will continue to conduct drills around Taiwan. It had previously said the drills would take place for four days through Sunday.

Last Thursday, the first day of drills, 11 ballistic missiles were fired near Taiwan, according to its Defense Ministry. Five of them fell into Japan's exclusive economic zone, the Japanese government said, prompting Japan, the United States and Australia to demand China "immediately cease" the drills in a joint statement.

"China has been conducting military activities around Taiwan, and firing ballistic missiles into waters close to Japan, replicating North Korea," Hayashi was quoted by the Japanese Foreign Ministry as saying, referring to Pyongyang's repeated ballistic missile tests since the start of this year.

Chinese Foreign Minister Wang Yi canceled a planned bilateral meeting with Hayashi at the last minute on Thursday. The meeting was scheduled in Phnom Penh on the fringes of a series of Association of Southeast Asian Nations-related ministerial meetings. 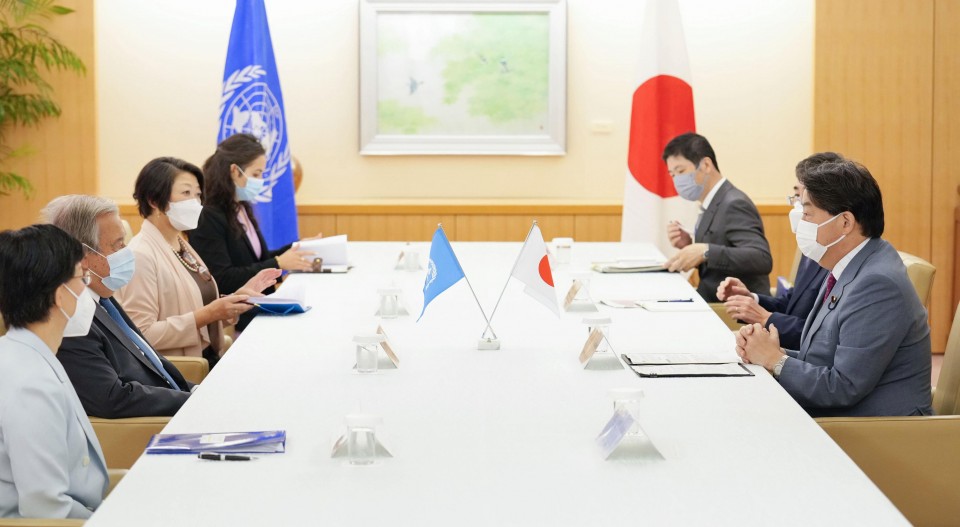 China cited as the reason for the decision a statement issued by the Group of Seven major developed nations, including Japan, that criticized Beijing's aggressive response to Pelosi's Taiwan visit.

Also mentioning Russia's invasion of Ukraine that began in late February, Hayashi expressed to the U.N. chief his belief that the rules-based international order should be respected, according to the ministry.

The Japanese minister also said Guterres played a key role when the United Nations and Turkey mediated a deal last month between Moscow and Kyiv to resume Ukrainian grain exports.

Other than the security issues, the two pledged to continue cooperating in dealing with challenges such as the global food crisis, climate change and the coronavirus pandemic, the ministry said.

During his four-day stay in Japan from Friday, Guterres expressed congratulations to Japan for joining the U.N. Security Council as a nonpermanent member for a two-year term from 2023. He also attended a ceremony on Saturday to mark the 77th anniversary of the U.S. atomic bombing of Hiroshima in 1945 and met Emperor Naruhito who expressed gratitude over the U.N. chief's visit to Hiroshima, according to the Imperial Household Agency.

Later in the day, Hayashi also held phone talks with his French counterpart Catherine Colonna over the Taiwan situation.

Colonna said that France is in solidarity with Japan and expressed serious concern over China's most recent military activities, according to the ministry.