The foreign ministers of Japan and South Korea agreed Monday they will seek an early settlement of a dispute over the issue of compensation demands from South Koreans about wartime labor that has frayed bilateral relations.

Foreign Minister Yoshimasa Hayashi and his South Korean counterpart Park Jin reached the agreement in a meeting in Tokyo, the first formal sit-down between them since South Korean President Yoon Suk Yeol's inauguration on May 10, according to the Japanese Foreign Ministry.

Despite the show of willingness, a gap on ways to address the long-standing row remains wide. 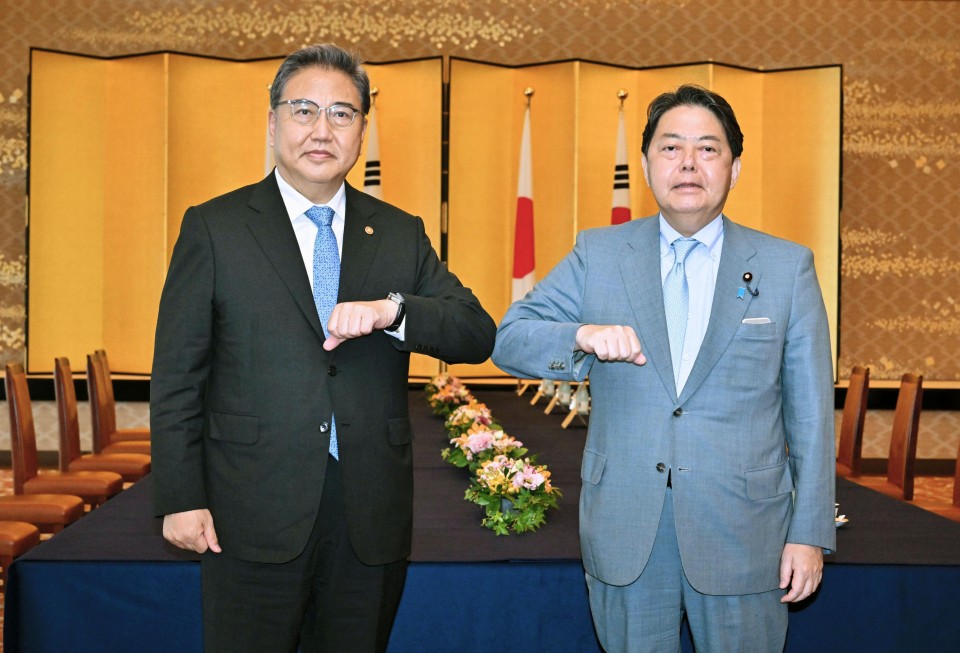 In the meeting, Park told Hayashi he will make efforts to produce "desirable solutions" before the liquidation of Japanese corporate assets in South Korea that plaintiffs in labor lawsuits have seized, the ministry said.

Hayashi stressed the need for the two neighbors to address pending issues including the dispute over former civilian workers from the Korean Peninsula.

Japan maintains all issues related to its 1910-1945 colonial rule of the Korean Peninsula, including the issue of compensation for requisitioned Korean workers as well as so-called comfort women, were settled "completely and finally" under a bilateral agreement signed in 1965.

"It is necessary to develop Japan-South Korea relations based on the foundation of friendship and cooperation the two countries have built since the normalization of our diplomatic relations in 1965," Hayashi was quoted by the ministry as telling Park.

Tokyo has called on Seoul to avoid the liquidation of assets seized from the companies, warning of a serious consequence to the bilateral relationship.

Meanwhile, South Korea's top court is expected to possibly issue a ruling on the envisioned liquidation in August or September.

In an effort to address the dispute, Seoul set up a public-private body for officials and experts earlier this month.

A Japanese government official told reporters that Japan's government has a recognition that the liquidation is imminent.

The issue of Koreans forced to work as comfort women in Japan's military brothels was also discussed at the meeting, which lasted about two and a half hours, according to the official.

In 2015, Japan and South Korea reached a landmark deal to settle the comfort women issue "finally and irreversibly." But the administration of Yoon's predecessor Moon Jae In effectively nullified it.

Hayashi reiterated Tokyo's stance that the issue has already been resolved and Seoul should follow through on the 2015 accord, the official said.

According to the South Korean Foreign Ministry, Park and Hayashi confirmed the two governments will accelerate discussions over the pending matters.

The two ministers exchanged views on how to develop "future-oriented" relations, it said.

Pyongyang has repeatedly conducted ballistic missile tests since the beginning of the year, with speculation growing that the nation may carry out what would be its seventh nuclear test, or the first since 2017.

The two ministers also discussed the operation of a bilateral military intelligence-sharing pact, known as GSOMIA, which was on the brink of termination during the Moon administration, a South Korean government official said, without providing details.

The top diplomats did not discuss arranging a summit between Japanese Prime Minister Fumio Kishida and Yoon, both having expressed a strong desire to prevent ties from deteriorating further, according to the Japanese official.

During his three-day visit to Japan through Wednesday, Park is arranging to meet with Kishida on Tuesday.

Park directly conveyed his condolences to Hayashi over the death of former Prime Minister Shinzo Abe, who was shot during a stump speech early this month in western Japan.