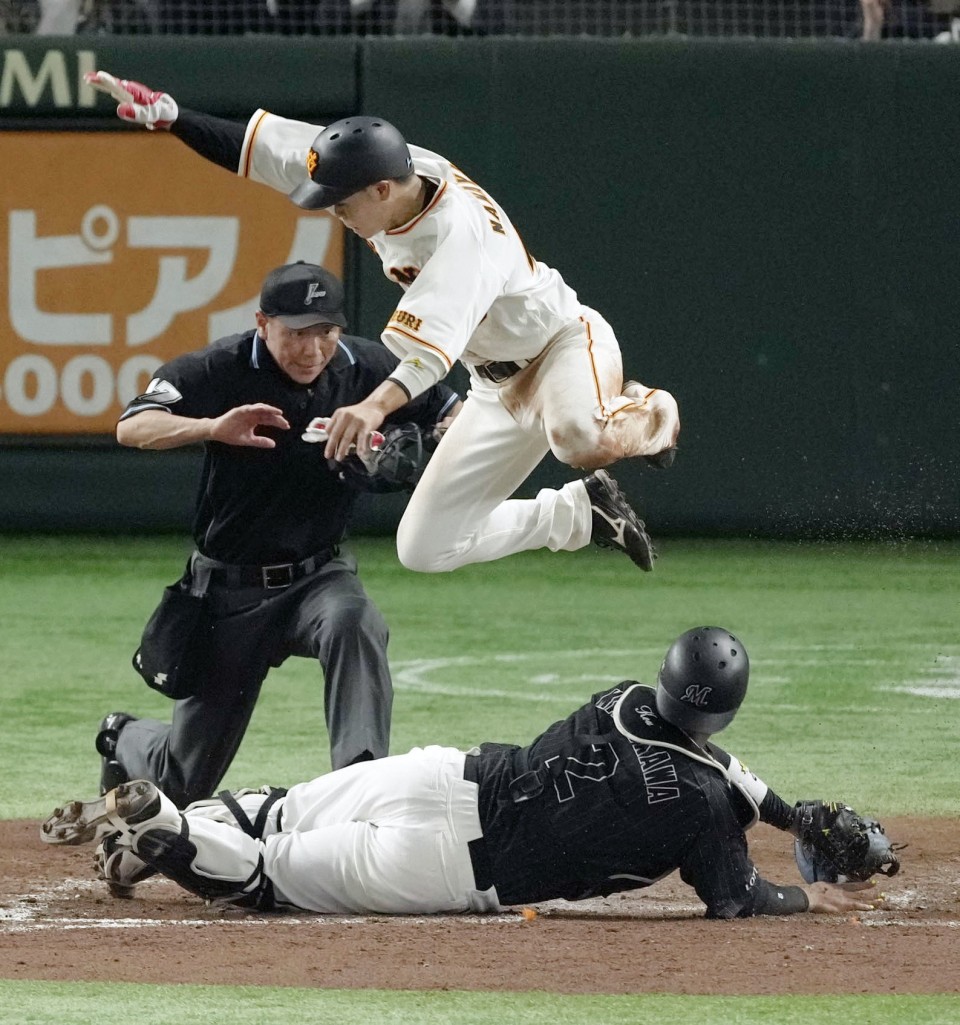 The Yomiuri Giants' Raito Nakayama (top) leaps after scoring on a single by Yoshihiro Maru in the fourth inning of an interleague baseball game against the Lotte Marines at Tokyo Dome on June 3, 2022. (Kyodo) ==Kyodo

TOKYO - Prime Minister Fumio Kishida is planning to attend a summit of the North Atlantic Treaty Organization slated for late June in Spain, which would make him the first Japanese leader to take part in a gathering of the Western alliance, government sources said Saturday.

Kishida's attendance at the June 29 to 30 event in Madrid is dependent on the domestic political situation leading up to a House of Councillors election likely to be held July 10, the sources said.

TAIPEI - The Chinese government's efforts to scrub the memories of the 1989 crackdown on pro-democracy demonstrators in Beijing's Tiananmen Square will be fruitless, Taiwan President Tsai Ing-wen said Saturday, the 33rd anniversary of the bloody event.

In a message on her Facebook page, Tsai said the collective memories of the 1989 massacre have been systematically erased in Hong Kong.

KOBE - Japanese ocean adventurer Kenichi Horie on Saturday became the world's oldest person to make a solo, nonstop 8,500-kilometer voyage across the Pacific on a yacht.

Horie, 83, reached the Kii Channel, which separates Wakayama and Tokushima prefectures in western Japan, on the Suntory Mermaid III, his 6-meter-long, one-ton boat, at 2:39 a.m., after setting sail from San Francisco, California, on March 27.

HONG KONG - Hong Kong on Saturday marked the 33rd anniversary of the military crackdown on a pro-democracy movement in Beijing's Tiananmen Square as hard-line former security head John Lee prepares to take over as the region's new chief next month.

The anniversary comes amid heightened security as China further tightens its grip on the city under its national security law after the disbandment last year of a prominent pro-democracy group.

WASHINGTON - The State Department has clarified in its "fact sheet" outlining relations between the United States and Taiwan that it does not support the independence of the island, after the removal of the phrase angered China.

"We oppose any unilateral changes to the status quo from either side; we do not support Taiwan independence; and we expect cross-strait differences to be resolved by peaceful means," the department said on the website, dated May 28.

TOKYO - A Japanese pharmaceutical company has started a trial sale of cold medicine, painkillers and other drugs via a vending machine it installed at JR Shinjuku Station in Tokyo, a project that would better serve commuters who suddenly come down with illness.

The vending machine by Taisho Pharmaceutical Co. at one of the busiest train stations in Japan became operable Tuesday and will be available to use until Aug. 31.

BEIJING - A train driver died and eight other people were injured after a bullet train derailed on Saturday morning in China's southwest province of Guizhou, the official Xinhua News Agency reported.

The bullet train was hit by mud and debris from a landslide as it was about to arrive at a station in Guizhou, Xinhua reported, citing China State Railway Group Co.