Ukrainian President Volodymyr Zelenskyy on Tuesday called for Russia's expulsion from the United Nations and accused Russia of being a "terrorist state."

"Although Russia is violating fundamental principles of the U.N. and international legal order, it is still not held to account at the global level," Zelenskyy said in a virtual address to the U.N. Security Council.

Zelenskyy's remarks come one day after a Russian missile struck a busy shopping center in Ukraine's central city of Kremenchuk.

He called on the United Nations to send a representative to the site of the missile attack, one of several in the past three days, and establish a special international tribunal to investigate the actions of Russian troops on Ukrainian soil. 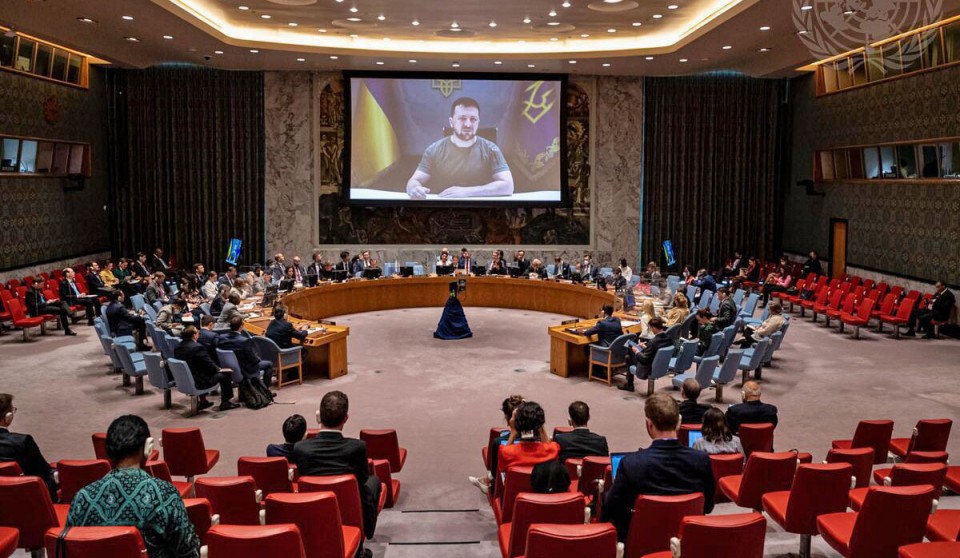 Ukrainian President Volodymyr Zelenskyy (on screen) delivers a virtual address to the U.N. Security Council in New York on June 28, 2022. (Photo courtesy of the United Nations)(Kyodo)

Ukrainian officials reported that the strike killed 18 people and injured at least 50, with dozens still considered missing. Zelenskyy told the Security Council that seven fragments of bodies were found.

More than 1,000 people were reportedly in the shopping mall at the time of the missile strike.

The emergency meeting was convened at the request of Ukraine by the Albanian delegation to the United Nations, which currently holds the presidency of the Security Council.

The meeting marked 125 days since the Russia launched its full-scale invasion of Ukraine.

In a previous address to the Security Council in April, Zelenskyy accused Russian forces of committing "the most terrible war crimes" since World War II.

Zelenskyy ended his address by asking for a moment of silence "to honor the memory of all Ukrainians who have been killed in this war."

"We condemn in the strongest terms the killing of civilians as a result of these missile attacks, in particular the attack that hit a crowded shopping center in Kremenchuk, Poltava region of Ukraine," said Ferit Hoxha, the Albanian permanent representative to the United Nations, in a joint statement on behalf of Albania, Britain, France, Ireland, Norway, the United States, and Ukraine.

"This strike was a blatant attack on civilian infrastructure and civilian population," the statement said.