Genki Haraguchi had two assists, and Kaoru Mitoma bagged his third international goal in as many games as Japan tuned up for the 2022 World Cup with a 4-1 friendly win over Paraguay on Thursday.

Takuma Asano, Daichi Kamada and Ao Tanaka also found the net for Hajime Moriyasu's side, who moved crisply in attack and controlled the contest at Sapporo Dome.

"Paraguay didn't qualify for the World Cup, but we treated this game just the same as if they had," said Moriyasu, who made six substitutions as he experimented with his lineup.

"It doesn't matter whether our opponents are going to the World Cup or not, we still have to put in the same hard work and effort." 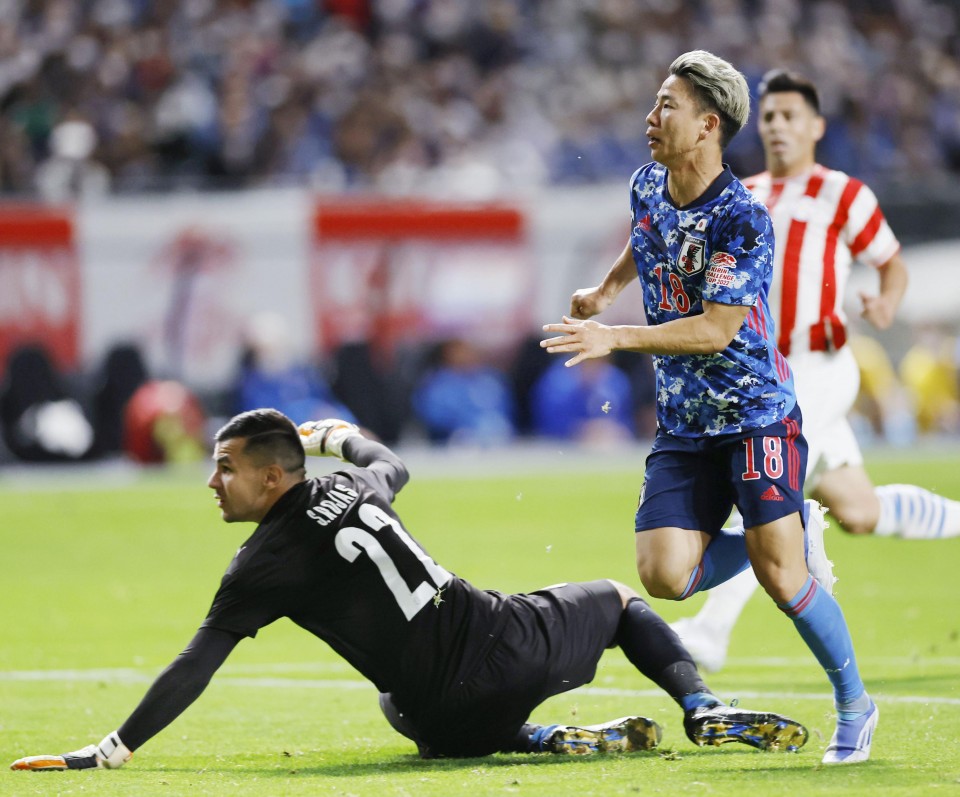 Takuma Asano of Japan (front, R) scores the opening goal in the first half of an international friendly against Paraguay, held in Sapporo, northern Japan, on June 2, 2022, as a warm-up for the World Cup finals opening in Qatar in November. (Kyodo) ==Kyodo

Ritsu Doan, Kamada and Wataru Endo had early chances for the hosts before a sharp-looking Asano made the breakthrough in the 36th minute.

He laid off Hiroki Ito's long ball with his chest to Haraguchi, then spun toward goal in time to receive the Union Berlin midfielder's through ball and chip Paraguay keeper Santiago Rojas at the edge of the area. 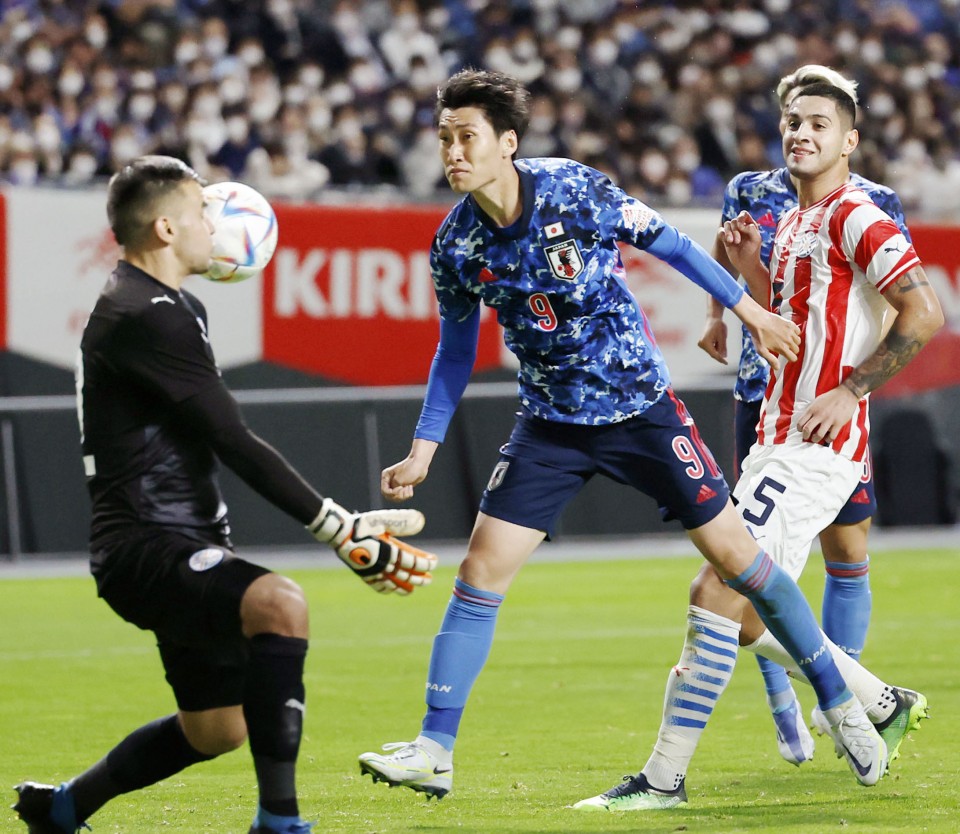 Daichi Kamada (C) of Japan scores a goal with a header in the first half of an international friendly against Paraguay, held in Sapporo, northern Japan, on June 2, 2022, as a warm-up for the World Cup finals opening in Qatar in November. (Kyodo) ==Kyodo

After a first half with little to do, Japan keeper Daniel Schmidt was beaten by forward Derlis Gonzalez in the 59th minute after the Samurai Blue gave away possession near the area.

Japan struck back immediately, with Haraguchi dancing around his marker before sending a diagonal ball along the deck to Mitoma, who scored with a deftly angled chip past Rojas.

Making just his second start, the 25-year-old added to his international tally after scoring both goals in Japan's 2-0 win over Australia in March that clinched qualification for the World Cup, kicking off in November in Qatar.

Kaoru Mitoma (R) of Japan reacts after scoring a goal in the second half of an international friendly against Paraguay, held in Sapporo, northern Japan, on June 2, 2022, as a warm-up for the World Cup finals opening in Qatar in November. (Kyodo) ==Kyodo

Kamada won a penalty when he was brought down inside the area, but PSV Eindhoven winger Doan had his resulting spot kick saved in the 70th minute.

Dusseldorf midfielder Tanaka found the target with a long-range strike in the 85th minute after substituting for Haraguchi midway through the second half.

Celtic forward Daizen Maeda, who entered for Bochum's Asano in the second half, had a number of chances to extend the lead late in the game but could not convert from close range.

Moriyasu's men face a sterner test in their World Cup preparations when they take on world No. 1 Brazil at Tokyo's National Stadium on Monday.