The yen hit a 24-year low against the U.S. dollar on Wednesday, briefly falling to around 135.60 on expectations of a further widening of the interest rate gap between Japan and the United States.

On the stock market, the benchmark Nikkei index was down for a fourth straight day as investors reacted to a possible U.S. economic slowdown amid prospects that the Federal Reserve will be more aggressive in its rate hikes to fight high inflation. 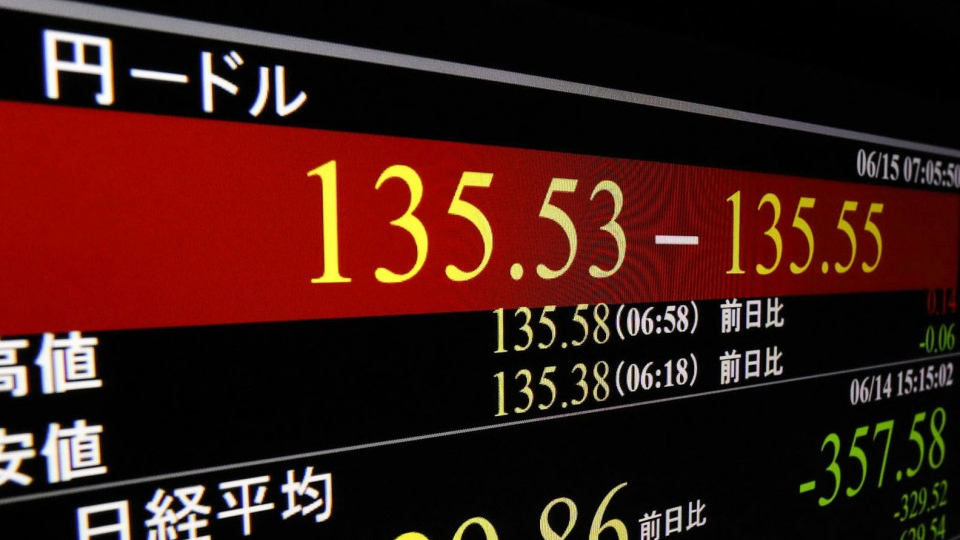 On the top-tier Prime Market, decliners were led by oil and coal product, mining, and electric power and gas issues.

Early Wednesday, the yen briefly touched its lowest level against the dollar since October 1998, sliding further from the 134 zone that it reached the previous day in Tokyo following an overnight rise in U.S. Treasury yields.

The yen, which moved back to the upper 134 range in the afternoon, was trading around the 115 level against the dollar at the beginning of the year but has rapidly weakened in recent months on the back of contrasting approaches by the Bank of Japan and the Fed.

Dealers said market participants bought the dollar on expectations the Fed will decide during its two-day policy meeting through Wednesday to raise rates by 0.75 percentage point for the first time since November 1994 to curb high inflation.

Chief Cabinet Secretary Hirokazu Matsuno told a press conference Wednesday the government hopes the BOJ will cooperate in taking the necessary steps to respond to recent developments in the currency market.

However, dealers said the yen will likely continue its fall as the BOJ is unlikely to change its monetary policy. Some said that the yen might test the 140 zone against the dollar.

On the stock market, the Nikkei index mostly traded in negative territory as market participants refrained from buying ahead of the outcome of the Fed's policy meeting to be released later in the day.

Investors feared that aggressive rate hikes by the U.S. central bank could weaken the prospect of economic growth which has already been undermined by Russia's invasion of Ukraine, brokers said.

"The market has been falling recently as investors expect the Fed to take a more hawkish stance and speed up the pace of its monetary tightening," said Masahiro Ichikawa, chief market strategist at Sumitomo Mitsui DS Asset Management Co.

Japanese businesses, especially exporters, will be hit by a slowdown in the U.S. economy, brokers have said.

The stock market was weighed down by energy-related shares that declined following an overnight fall in crude oil futures, brokers said.

Bucking the downward trend, Ya-Man surged 159 yen, or 12.8 percent, to 1,399 yen after the facial beauty devices maker reported robust earnings Tuesday for its business year through April, helped by increasing sales in the Chinese market.

The yield on the benchmark 10-year Japanese government bond was unchanged from Tuesday's close at 0.250 percent.