Nissan Motor Co. said Thursday it logged a net profit of 215.53 billion yen ($1.67 billion) in the last fiscal year, returning to the black after two straight years of massive losses, as its earnings were helped by a weaker yen against the U.S. dollar.

The automaker said it expects net profit to fall 30.4 percent to 150 billion yen for the current business year through March 2023 amid a global shortage of semiconductors and surging raw material prices.

Nissan's net profit in the year ended March 31 marks a sharp turnaround from a loss of 448.70 billion yen in fiscal 2020, while the company posted an operating profit of 247.31 billion, compared with 150.65 billion yen in loss a year earlier.

Sales rose 7.1 percent from fiscal 2020 to 8.42 trillion yen, even though its global sales volume fell 4.3 percent to 3.88 million units due to the chip crunch. 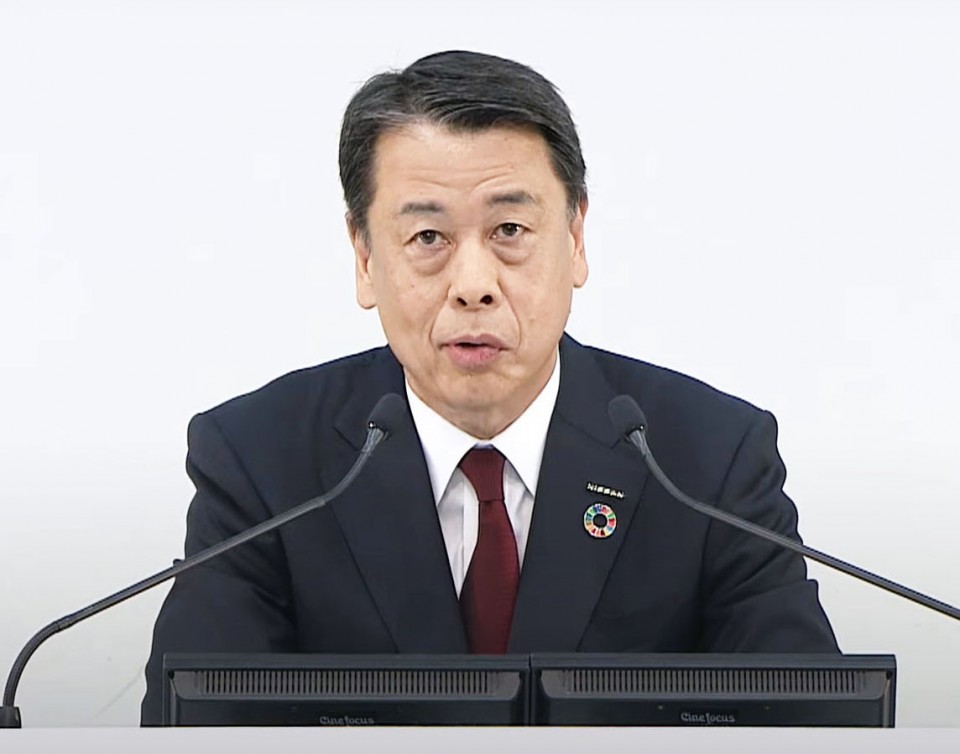 Nissan Motor Co. President and CEO Makoto Uchida is pictured during an online press conference on May 12, 2022. (Kyodo)

The automaker said it was able to lessen the impact of surging material costs and a fall in sales volume through the depreciation of the yen against the dollar and an increase in net revenue per unit of major models amid strong demand in the United States, among other factors.

In the current fiscal year, Nissan expects its operating profit to rise 1.1 percent to 250 billion yen as it projects global sales to improve to 4 million units through the introduction of new models and an easing of the semiconductor shortage.

But it is projecting its net profit to fall 65.5 billion yen from a year earlier, partly as its figure for fiscal 2021 included profit of about 76 billion yen from the sale of its entire stake in German automaker Daimler AG, according to the company.

"We are expecting another year in a very challenging business environment," Nissan President and CEO Makoto Uchida told a press briefing.

Uchida said the company is predicting to see the impact of the continued semiconductor shortage, geopolitical issues surrounding Russia and Ukraine and the jump in material costs.

Nissan projected that a rise in raw material prices and logistic costs will weigh on operating profit by 257 billion yen, while foreign exchange rates among other factors will have a positive impact of 50 billion yen.

Nissan put its assumed exchange rate for the U.S. dollar at 120.0 yen for the current fiscal year. A weaker yen has been proving a boon to automakers as their overseas profits are boosted when repatriated.

The company fell into red ink in fiscal 2019 as the COVID-19 pandemic dented consumer demand at a time when it was reeling from the arrest and ouster of former Chairman Carlos Ghosn.

Nissan has been shifting from an expansionist policy pursued under Ghosn that led to excessive manufacturing capacity and a ballooning of fixed costs. The former chairman was arrested in 2018 for alleged financial misconduct.

As global competition for greener cars has intensified, Uchida said Nissan has been holding talks with Renault SA, Nissan's French partner, over its plan to establish a new company for electric vehicles.

Nissan said in late January with Mitsubishi Motors Corp. and Renault that they will invest 23 billion euros ($24 billion) in electric car technology over the next five years. They aim to launch 35 new EV models by 2030.