China on Monday voiced firm opposition to U.S. President Joe Biden's stated commitment to defending Taiwan if the mainland attempts to seize the self-ruled island by force, in a fresh sign that tensions between the world's two major powers may escalate.

"China expresses strong dissatisfaction with and firm opposition to the remarks" Biden made during a press conference after holding a summit with Japanese Prime Minister Fumio Kishida in Tokyo earlier in the day, Foreign Ministry spokesman Wang Wenbin told reporters.

Asked in Tokyo by a reporter if the United States is willing to get involved militarily in a Taiwan contingency, Biden said, "Yes. That's the commitment we made."

Wang said, "The Taiwan issue is purely China's internal affairs and cannot be interfered by any external forces," adding Beijing will take "firm action to safeguard its sovereignty and security interests."

Later Monday, the Taiwan Foreign Ministry welcomed Biden's comments while pledging to work together with the United States, Japan and other nations to protect the "peace and stability in the Indo-Pacific region."

Biden, meanwhile, said the United States maintains its one-China policy under which it recognizes Beijing as the "sole legal government of China," apparently trying to brush aside speculation that Washington might shift its ambiguous stance toward Taiwan. 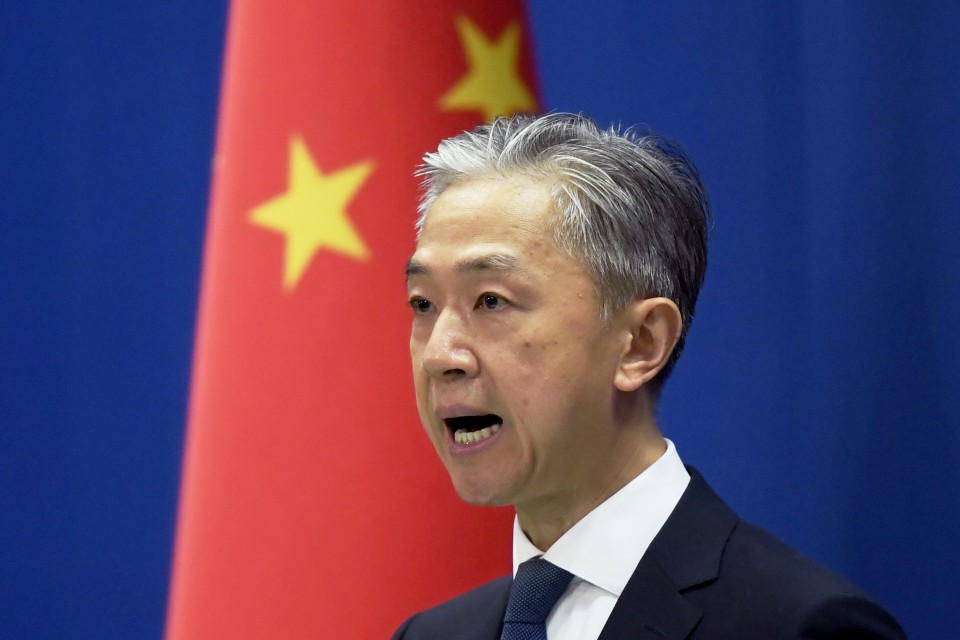 Communist-led China and democratic Taiwan have been governed separately since they split in 1949 due to a civil war. China has regarded Taiwan as a renegade province to be reunified with the mainland, by force if necessary.

Biden is scheduled to stay in Japan between Sunday and Tuesday after visiting South Korea for three days from Friday.

As Biden has no plan to stop by China during his trip to East Asia, President Xi Jinping's leadership may be irritated by Washington's intention to bolster security and economic cooperation with its Asian allies to counter China, pundits say.

With Xi being keen to burnish his image at home and abroad to secure a controversial third term as leader at the ruling Communist Party's twice-a-decade congress in the fall, China is believed to be reluctant to avoid worsening relations with its neighbors such as South Korea.

However, Beijing's ties with Tokyo have been souring, especially after China temporarily detained a Japanese diplomat while on duty earlier this year -- an incident that Japan claims clearly violated the Vienna Convention on Diplomatic Relations.

On Monday, Biden also launched an Indo-Pacific economic initiative joined by a dozen countries, including Japan and South Korea, setting the stage for deeper engagement in the fast-growing region where China is expanding its clout.

Chinese Foreign Minister Wang Yi was quoted by the official Xinhua News Agency as saying on Sunday that Beijing "opposes attempts to create division and confrontation" and that the Indo-Pacific strategy led by the United States is "bound to fail."

Xinhua has emphasized that the purpose of establishing the Indo-Pacific economic initiative is to exclude China from the global supply chain.

China is expected to try persuading Southeast Asian nations, whose economies have been heavily dependent on the world's second-biggest economy, not to participate in the economic framework proposed by the Biden administration.

All eyes are on whether Taiwan will become a member of the Indo-Pacific economic initiative in the future, as the move is sure to upset mainland China.