An Okinawa politician who in the 1990s became the first Cabinet minister as a lawmaker elected from the southern island had drafted a document theorizing how to achieve independence from Japan, according to the manuscript seen by Kyodo News.

The manuscript was never published and the author, Kosuke Uehara, died in 2017 at age 84, but the thought exercise by a one-time senior government official could aid discussions about Okinawa and its place in Japan at a time when the prefecture remains burdened with U.S. bases 50 years after its reversion.

The conclusion reached by Uehara in his writing tentatively titled "Ambitions for Okinawa Independence" was, "For Okinawa to gain independence in a way acceptable to the Japanese government, a one-country, two-systems is the most realistic choice." 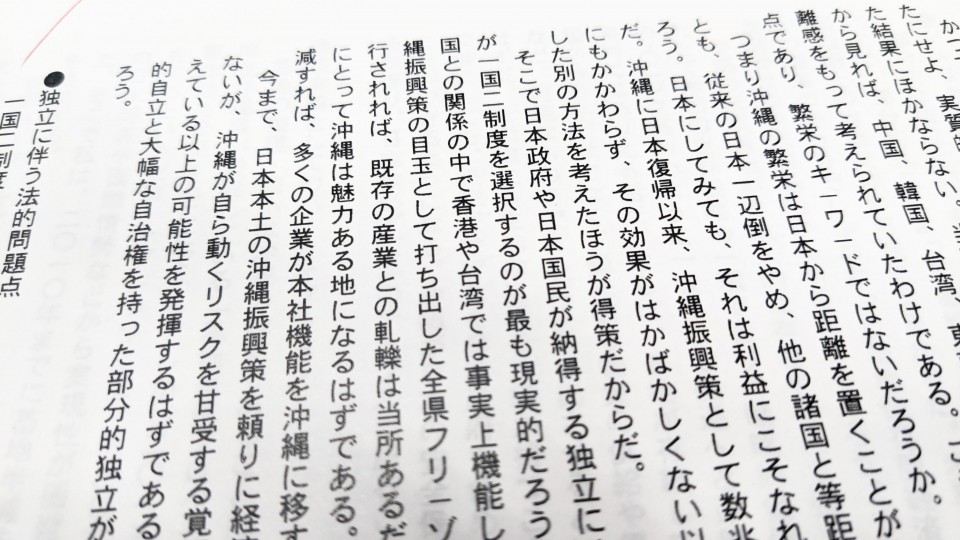 Uehara was first elected to the House of Representatives in 1970 in the first postwar national-level election held in Okinawa. The island was still under U.S. rule, but Japanese and U.S. leaders had in 1969 announced its reversion in 1972.

The Japan Socialist Party lawmaker went on to serve concurrently as the head of the National Land Agency, the Okinawa Development Agency as well as Hokkaido Development Agency under the multiparty government of Prime Minister Morihiro Hosokawa launched in 1993.

Uehara wrote the document between 1997 and 1998 at a time when anti-U.S. base sentiment was running high following the 1995 gang rape of a 12-year-old local schoolgirl by three U.S. servicemen.

The manuscript was around 90 percent completed.

"We had plans to publish it as a book, but I got a message from Mr. Uehara's side that publication was no longer possible," said Hirotsugu Okamura, a 69-year-old publishing producer. "It then remained sat in my private study."

The manuscript consists of five chapters, including one on why it is important to argue for independence, one on how that can be achieved and one on the then lawmaker's tentative proposal for "building the Nation of Okinawa." 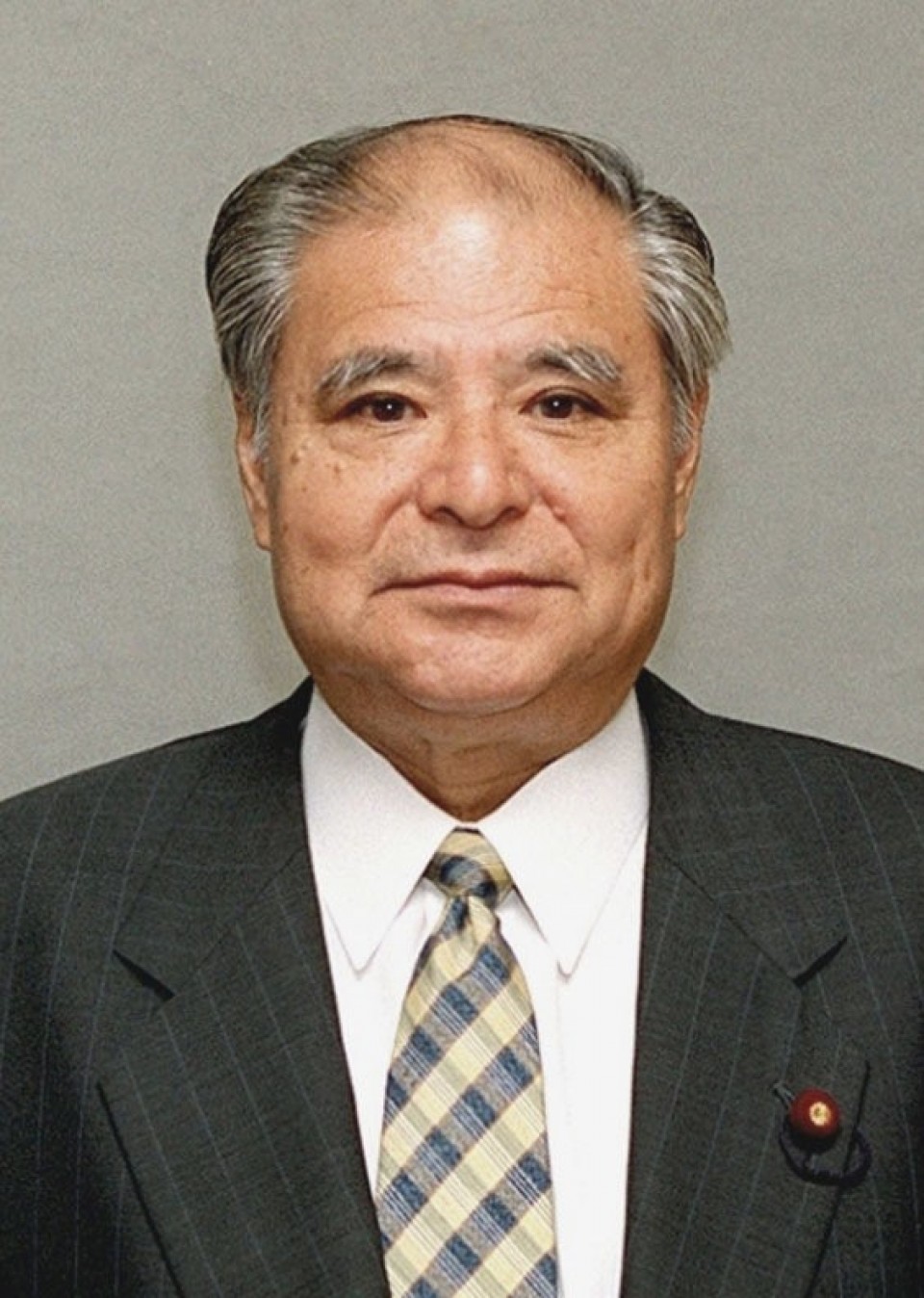 Kosuke Uehara, a former Okinawa-elected lawmaker who drafted a document on Okinawa independence, is pictured in 2000. (Kyodo)

In it, Uehara makes a point of not advocating independence that outright shuns ties with Japan. He analyzes that if Okinawa declares independence, it is highly likely to be construed as insurrection and therefore hardly achievable under current law.

The most realistic choice, Uehara says, would be "partial independence that involves economic independence and a great deal of autonomy under a one-country, two-systems." "That would be the first step."

Uehara had posed a probing question at a meeting of the lower house Budget Committee in February 1997. "What kind of legal measures would be needed if Okinawa were to become independent?" asked Uehara, who was then an opposition lawmaker.

Reactions to Uehara's question were strong and are believed to have motivated him to research the matter deeply by collecting materials on his own, and to plan to unveil his ideas in a book form.

Yasuji Uehara, a 60-year-old son of the former lawmaker, surmises that his father never published it after starting to worry that his argumentation could impact the unity of Okinawa people.

"Even though he tried to build arguments for independence, in the end, he never got to publish them, probably fearing such argument-building could lead to divisions among people in the prefecture."

Uehara penned the manuscript when many Japanese people were drawing their attention to continuing hardships faced by people in Okinawa, a quarter century after the reversion.

Uehara was apparently concerned that Okinawa would eventually drift away from the minds of many Japanese. "It is important to set a goal strong enough to continue to draw interest to Okinawa issues," he writes in the manuscript. 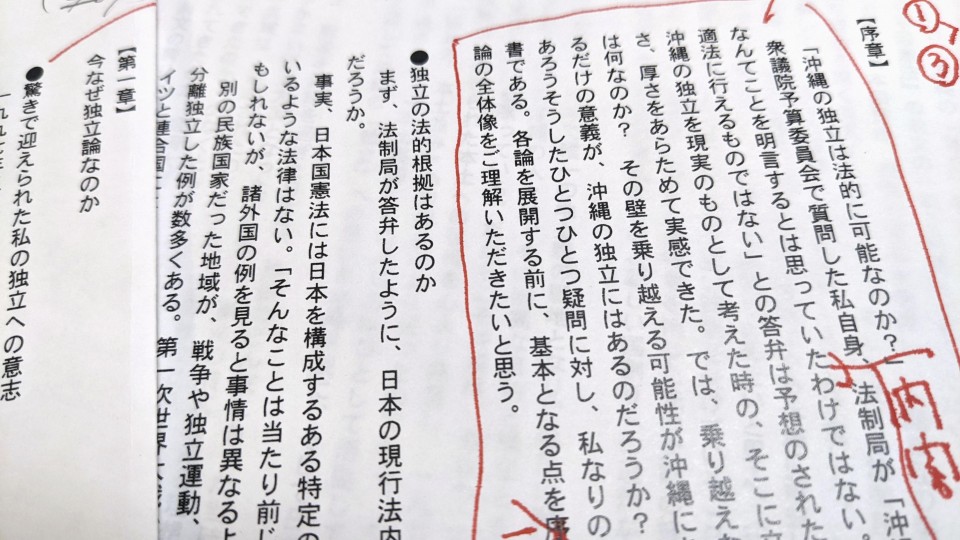 Hiromori Maedomari, a professor of the prefecture's economy at Okinawa International University, describes Uehara's manuscript as a "realistic proposal after careful consideration of steps toward independence."

"This is something only Mr. Uehara could write because he knew well the political maneuvering by the Japanese government and the distance with the administration," he said, adding that had the writing been published back then, it could have had a far-reaching impact.

The Ryukyu Islands, to which Okinawa belongs, developed into a unified kingdom in the 15th century. The kingdom was conquered by the Satsuma feudal domain from what is now Kagoshima Prefecture in 1609.

In 1879, the Ryukyus were designated Okinawa Prefecture, spawning an independence movement. Far removed from the mainland geographically, Okinawa developed its own culture.

Independence talk gained some currency around the time of Okinawa's return to Japan in the form of opposition to reversion, on the assumption that large U.S. military presence on the island would not be reduced to the levels outside the prefecture.

After the 1995 rape incident, frustrations grew over the Japanese government for its failure to find solutions to base-rooted issues. Okinawa independence became a topic covered not just by local media but by those in the mainland.

But some people dismissed the idea as unrealistic.

One former colleague of Uehara's in the lower house was surprised that he had written on Okinawa independence but said he can see Uehara's life through the writing.

"The people of Okinawa, who were discriminated against by the U.S. military after the war, worked hard to be Japanese after reversion," former lower house Speaker Takahiro Yokomichi said.

"Mr. Uehara, too, worked hard as a politician. But the reality was that they were not treated as the same ethnic group, which left him indignant."

According to a Kyodo opinion survey conducted on people in Okinawa earlier this year, about 30 percent positively viewed arguments for the island's independence, while about 70 percent viewed them negatively.