Japan's estimated child population fell for the 41st straight year to a record low, government data showed Wednesday, as women are believed to have refrained from having children due to the expanding coronavirus pandemic.

The number of children aged 14 or younger, including foreigners, stood at 14.65 million as of April 1, down about 250,000 from a year earlier and the lowest figure since 1950 when comparable data became available, according to the data released by the internal affairs ministry.

The ratio of children to Japan's overall population also fell to a record low of 11.7 percent, down 0.1 percentage point, the 48th straight year of decline. 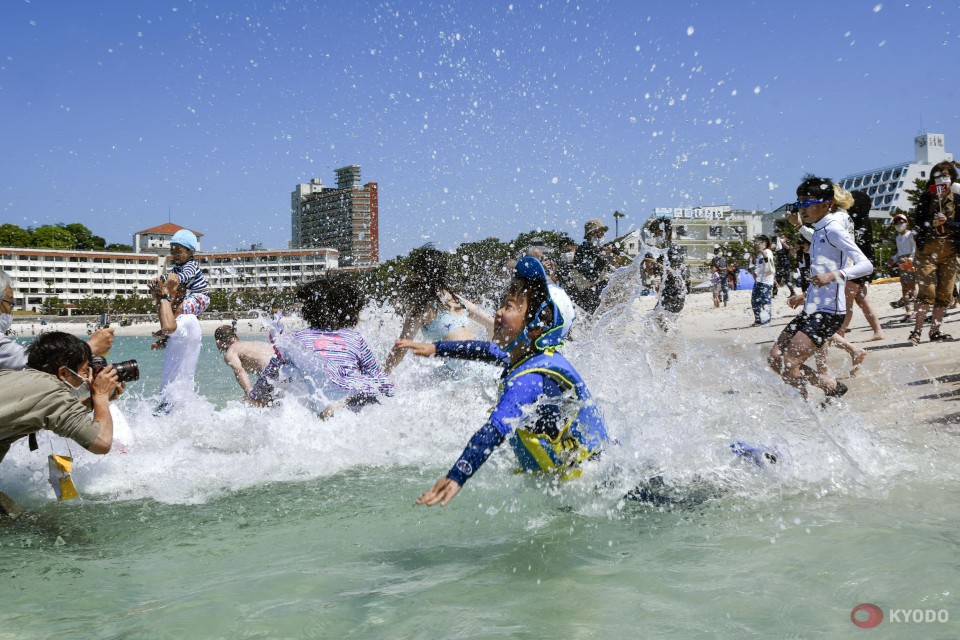 Children play on a beach in the Wakayama Prefecture town of Shirahama, western Japan, on May 3, 2022, as the popular swimming beach known for white sand opens the same day, the earliest among beaches on the Japanese main island of Honshu. (Kyodo) ==Kyodo

Japan has the lowest such ratio among the 35 countries with a population of over 40 million, falling below Italy's 12.9 percent and South Korea's 11.9 percent, according to the U.N. Demographic Yearbook.

By gender, boys accounted for 7.51 million of the total while girls made up 7.15 million, according to the Ministry of Internal Affairs and Communications data.

There were 3.23 million children between 12 and 14, compared with 2.51 million aged up to 2, reflecting the trend that the number falls as they become younger.

As of Oct. 1, all 47 of Japan's prefectures saw a decline in child population from the previous year, for the first time since 1999.

The southern prefecture of Okinawa had the highest ratio of children in its overall population at 16.5 percent, while Akita in the country's northeast logged the lowest at 9.5 percent.

The child population in Japan peaked in 1954 at 29.89 million. The number briefly picked up around the early 1970s but has continued to fall since 1982.