Representatives of Japan, the United States and three other countries briefly walked out of a meeting of Asia-Pacific trade ministers on Saturday in protest against Russia's invasion of Ukraine, officials said.

The two-day meeting in Bangkok of the Asia-Pacific Economic Cooperation forum will wrap up Sunday, with promotion of trade and investment in a post-COVID-19 world high on the agenda. 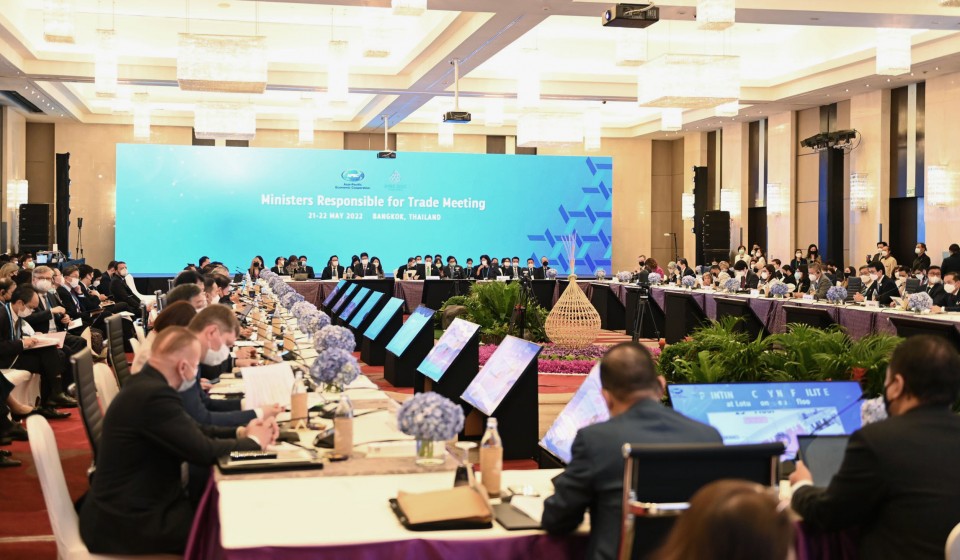 Photo shows a trade ministers' meeting of the Asia-Pacific Economic Cooperation forum in Bangkok, Thailand, on May 21, 2022. (Photo courtesy of Thai government)(Kyodo)

The delegations of the five countries left the room for about three minutes while the Russian minister spoke but returned to the table afterward, according to the officials.

As 21 economies forming the group, also including China and Indonesia, remain apart in their responses to Russia over its invasion of Ukraine, it remains unclear whether a joint statement will be issued by the ministers after the meeting.

Thai Commerce Minister Jurin Laksanawisit, who heads the meeting, said he will issue a chairman's statement if APEC cannot issue a joint communique.

"We hope that the outcome of this year's APEC trade ministers' meeting will play an important role in helping to determine the policy direction for the recovery and stimulation of regional economic growth in various areas in the post-COVID-19," Jurin said earlier as he opened the meeting.

It was the first APEC trade ministers' meeting held in person in three years, as restrictions associated with the coronavirus pandemic have eased.

On the sidelines of the meeting, Japan's Economy, Trade and Industry Minister Koichi Hagiuda held talks with some of his counterparts, with the U.S.-led Indo-Pacific economic framework possibly one of the major issues.

The framework, called IPEF, aims to encourage openness while enhancing prosperity and building the resilience of the region, according to the U.S. government.

Its launch is expected to be formally announced during U.S. President Joe Biden's trip to Japan in which he will hold talks with Japanese Prime Minister Fumio Kishida on Monday.

"We would like to welcome IPEF, as it will be a framework to strengthen the U.S. involvement in the Indo-Pacific region," Hagiuda told reporters in Tokyo before leaving for the Thai capital.

Other issues on the agenda include food insecurity, high energy prices and the resumption of tourism.

Founded in 1989, APEC operates on the basis of nonbinding and consensus-based cooperation to discuss free trade and economic cooperation by the Asia Pacific region.

The APEC leaders' meeting this year is planned to be held in person in November in Bangkok.