Ministers from the Group of Seven developed nations expressed grave concern Friday about soaring food and energy prices in the wake of Russia's war in Ukraine, an aggression that has been threatening energy security in the world.

The G-7 affirmed cooperation in addressing soaring energy prices without compromising climate policy mechanisms that would spur transition to clean energy from fossil fuel, according to a communique issued after a two-day ministerial meeting on climate, energy and environment issues in Berlin. 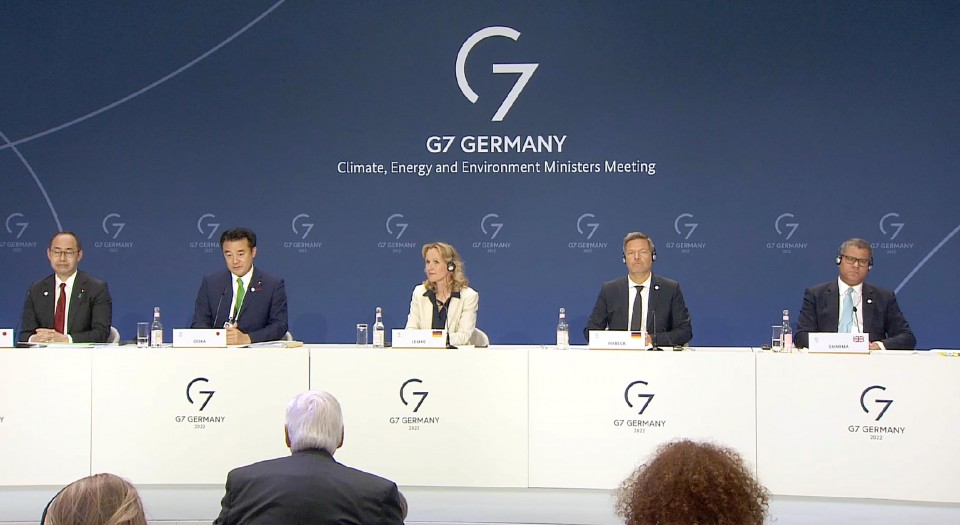 Photo taken from broadcast image shows participants to a Group of Seven ministerial meeting on climate, energy and environment issues at a press conference on May 27, 2022, in Berlin. (Kyodo)

"Recent events have also given rise to significant risks to the energy supply security of G-7 countries and beyond," the ministers said, referring to the impact of Russia's "unjustifiable, unprovoked and illegal war of aggression against Ukraine."

They stressed the vital role liquefied natural gas can play to mitigate potential supply disruptions of pipeline gas to European markets and elsewhere.

In 2021, Russian exports made up more than 40 percent of gas consumed in the European Union, according to the European Commission, the EU's executive branch.

Japan's industry minister Koichi Hagiuda told reporters in Tokyo on Friday that the country will try to diversify its energy suppliers by investing in LNG projects outside Russia, among other means, to reduce its dependence on Russian natural gas.

Hagiuda, minister of economy, trade and industry, and Environment Minister Tsuyoshi Yamaguchi did not attend the meeting due to parliamentary sessions at home.

"We will steadily fade out inefficient coal power generation toward 2030 and replace it with decarbonized thermal power toward 2050 by utilizing hydrogen, ammonia, carbon capture and storage," Hagiuda said.

The G-7 ended new direct government aid for "unabated" international thermal coal power generation in 2021. Unabated means a plant has not invested in abating technology, such as carbon capture and storage.

In Berlin, the G-7 ministers agreed to stop fresh public aid to unabated overseas fossil fuel facilities by the end of 2022, meaning the scope of their efforts to fight climate change is expanding from coal power generation to the whole fossil fuel sector including oil and natural gas.

Germany, this year's G-7 president, has proposed that the ministers stipulate the goal of phasing out coal power generation by 2030. But Japan opposed committing to a specific time frame in the meeting, resulting in the absence of such a goal in the communique.

European G-7 members and Canada backed Germany's proposal, while the United States compromised to aim for the goal "in the 2030s," according to delegates to the Berlin meeting.

The communique said the G-7 will take "concrete and timely steps" to achieve the goal of an eventual phase-out of domestic coal power generation facilities without appropriate measures to reduce emissions.

The G-7 also affirmed their commitment to largely decarbonize their power sectors by 2035.