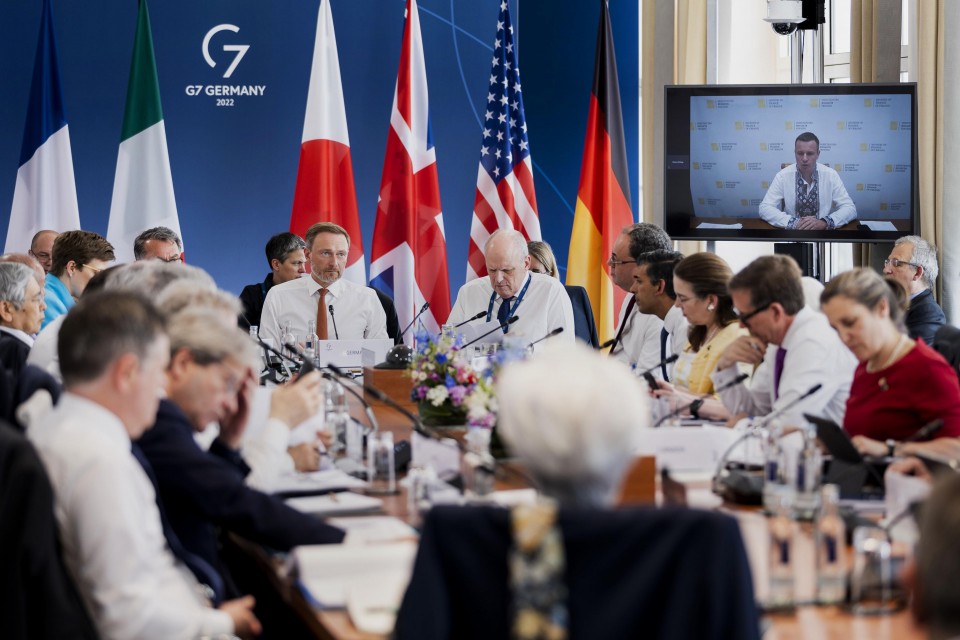 Photo shows a working session of a meeting of Group of Seven finance ministers and central bank governors in Koenigswinter, Germany, on May 19, 2022. Seen on the screen is Sergii Marchenko, minister of finance of Ukraine. (Photo courtesy of German government)(Kyodo)

Finance chiefs from the Group of Seven industrialized nations said Friday they have mobilized $19.8 billion this year for war-torn Ukraine and pledged more financial assistance if needed.

In a communique issued after a two-day meeting held near Bonn, Germany, the G-7 finance ministers and central bank governors condemned "Russia's war of aggression" and said, "We will continue to stand by Ukraine throughout this war and beyond and are prepared to do more as needed."

Japanese Finance Minister Shunichi Suzuki told his counterparts in the meeting that Tokyo will assist Kyiv with an additional $300 million in aid, as announced Thursday by Prime Minister Fumio Kishida.

The G-7 underscored its commitment to fully enforcing sanctions on Moscow and affirmed the leading democracies remain vigilant against sanctions evasion, according to the communique.

"We continue to increase Russia's costs of its war by isolating Russia and Belarus from the global economy," said the financial leaders of Britain, Canada, France, Germany, Italy, Japan and the United States, plus the European Union.

Referring to Russian President Vladimir Putin, the communique said, "President Putin, his government and supporters, and the enabling Belarusian regime, bear full responsibility for the social and economic consequences of the war."

The G-7 blamed Russia's war for causing substantial increases in commodity, energy and food prices, and said the G-7 central banks "are closely monitoring the impact of price pressures on inflation expectations."

Fuel prices had already been rising as the global economy recovered from the coronavirus pandemic fallout, but the pace accelerated on supply concerns following Russia's invasion, which began in late February.

Prices of grain such as wheat, of which Russia and Ukraine are major producers, have also increased sharply.

Aside from the G-7's response to the Ukraine crisis, the group reaffirmed that excess volatility and disorderly movements in the currency market are undesirable, Suzuki said at a joint news conference with Bank of Japan Governor Haruhiko Kuroda after the meeting.

Rapid depreciation of the yen against the U.S. dollar has been a concern for resource-poor Japan as it inflates import prices of fuels and raw materials.

Despite the G-7's agreement to "appropriately calibrate the pace of monetary policy tightening," Kuroda said he told the meeting that Japan will continue its powerful monetary easing until it achieves the central bank's 2 percent inflation target.

Although Japan's core consumer price index in April accelerated 2.1 percent from a year earlier, surpassing the BOJ's 2 percent target, Kuroda said the BOJ has been aiming for a sustainable inflation that is accompanied by strong wage growth.

The meeting, which also touched on climate change and the debt crisis for developing countries, laid the groundwork for a G-7 summit that Germany will host in June. 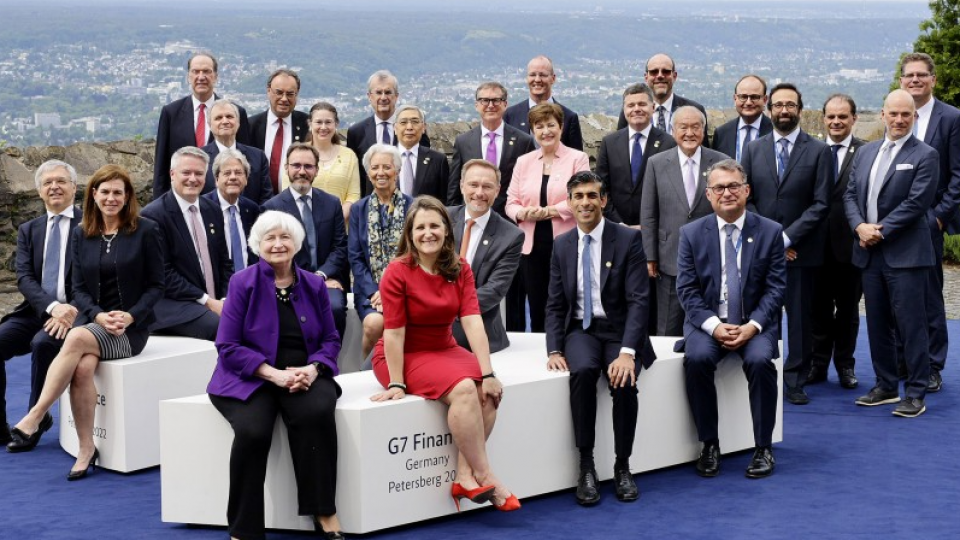 Group of Seven finance ministers and central bank governors pose for a photo ahead of their meeting in Koenigswinter, Germany, on May 19, 2022. (Photo courtesy of German government)(Kyodo)