The two countries signed a deal in December 2015 to put an end to the historical feud over women who worked at wartime Japanese military brothels against their will. However, the current Moon Jae In government that came into office in 2017 described it as "seriously flawed," causing bilateral ties to sink to the lowest point in years. 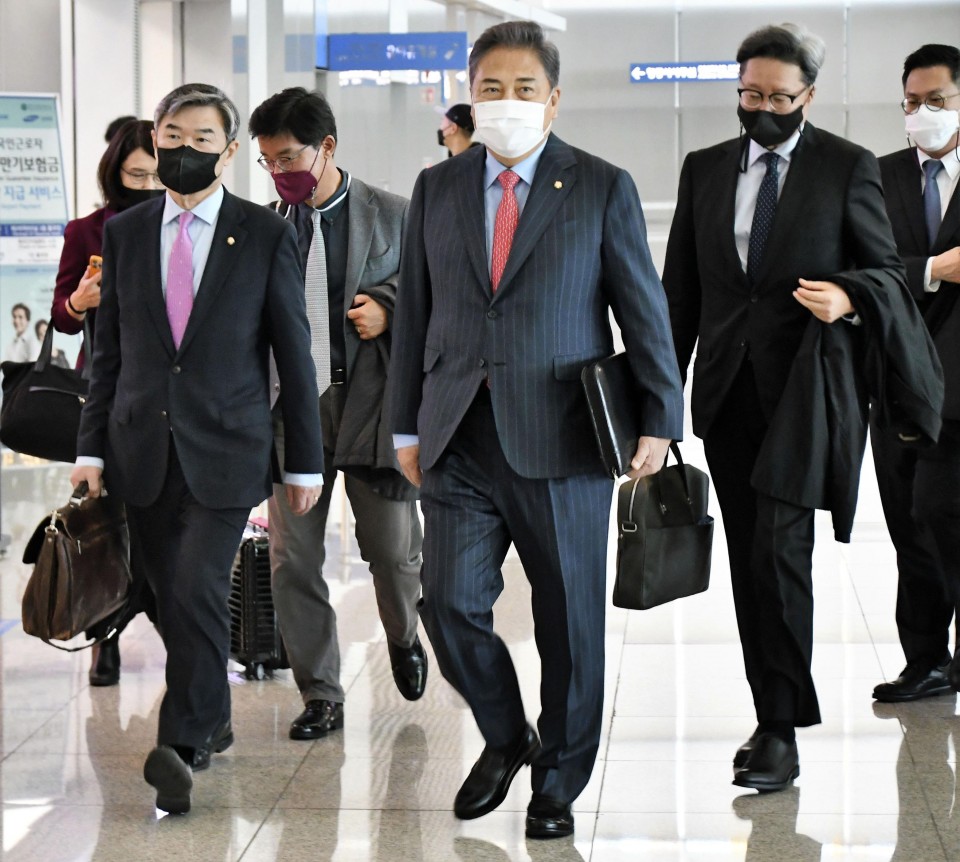 Park Jin (C) is pictured at Incheon airport near Seoul on April 3, 2022, before departing for the United States. (Kyodo)

"The agreement on 'comfort women' is an official one, and the current Moon Jae In administration also acknowledges it. The most important part is joint efforts from South Korea and Japan to recover the honor and dignity of the victims," Park told reporters.

Wartime issues stemming from Japan's 1910-1945 colonization of the Korean Peninsula have overshadowed ties between the Asian neighbors, both U.S. allies.

Park's remarks came ahead of the dispatch to Japan of president-elect Yoon's delegation for talks over bilateral issues and cooperation with Japanese lawmakers, diplomats and business leaders.

Japan's top government spokesman Hirokazu Matsuno said in Tokyo that the agreement settled the issue of comfort women "finally and irreversibly" and stressed the need to keep a promise between the two nations.

"We need to further ties based on our friendly and cooperative relationship that has been built since the 1965 normalization of ties," Matsuno said. "We have expectations for incoming President Yoon Suk Yeol's leadership."

Based on the 2015 accord, Japan paid 1 billion yen ($7.8 million), and the money was distributed through a foundation to former comfort women and the families of those who died.

In 2019, however, the foundation was dissolved after the Moon administration concluded that the deal, reached under a previous government, failed to properly reflect the women's wishes.

Regarding Yoon's delegation visiting Japan from Sunday ahead of his inauguration on May 10, Park said its meeting with Japanese Prime Minister Fumio Kishida is still being arranged.

Kishida, who was Japan's foreign minister at the time of the 2015 pact, has expressed hope to meet in person with Yoon.

The dispatch of the seven-member delegation, however, has stirred concerns among South Korean civic groups, as it includes Lee Sang Deok, who negotiated the 2015 deal with Japan.

"South Korea's incoming government should go to the discussion table with Japan after sincerely listening to the victims and public opinion," the Korean Council for Justice and Remembrance for the Issues of Military Sexual Slavery by Japan said in a statement released Tuesday.

The civic group also expressed worries that Yoon would try to quickly settle the row with Japan without fully considering the former comfort women's sentiment for the sake of "normalizing" and "recovering South Korea-Japan ties."