Roki Sasaki allowed his first base runner and runs in three weeks, and worked just five innings, but the Lotte Marines held on to get him the win in Sunday's 6-3 Pacific League victory over the Orix Buffaloes.

On the heels of eight perfect innings but no decision a week ago and an April 10 perfect game against Orix, Sasaki's streak ended on his first pitch of the game at Kyocera Dome. 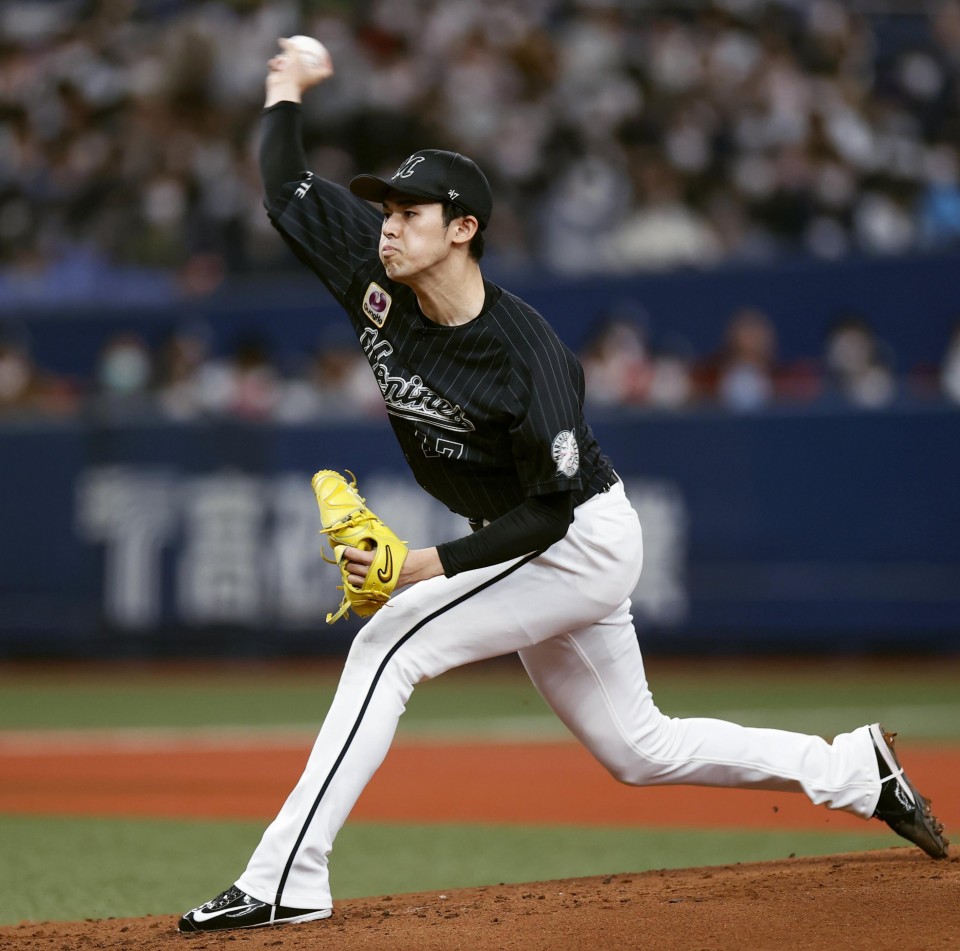 Roki Sasaki of the Lotte Marines pitches in a Pacific League game against the Orix Buffaloes at Kyocera Dome Osaka on April 24, 2022. (Kyodo)

Shuhei Fukuda smashed a fastball from the 20-year-old right-hander past first base, ending a streak of 52 straight batters retired.

Lacking the sharp command of both his fastball and forkball that has been his calling card this season, Sasaki allowed two runs on three walks, two hit batsmen and six hits over five innings.

Sasaki, who garnered international attention with his feats, struck out just four batters, his lowest total of the year.

Only a big throw by left fielder Akito Takabe and a good tag by rookie catcher Ko Matsukawa kept the Buffaloes off the board in the first inning.

"The game can go either way most easily in the first inning, so I'm glad I charged the ball well there," said Takabe, who a few minutes later drove in the game's first runs.

After two walks and a two-out throwing error by right-hander Soichiro Yamazaki (0-2) loaded the bases, Takabe singled in two. A Koshiro Wada single made it 3-0.

"I hadn't been hitting at all when Roki pitched, so I badly wanted a hit, and I'm so glad we could get him the win," Takabe said.

Sasaki walked a batter in the fourth, his first since his March 27 season debut, but his command all but deserted him in the fifth.

The right-hander started a double play after Orix loaded the bases on a single and two no-out walks. One run scored on the play and Masataka Yoshida, winner of the last two PL batting titles, doubled in another.

It was the second hit of the game for Yoshida, who accounted for three of Sasaki's record-tying 19 strikeouts on April 10.

"I worked my absolute hardest to throw strikes the whole day," Sasaki said. "I got into a lot of tough spots, but even with my poor command I managed to go five innings without letting them take the lead."

The Marines bullpen survived a two-out bases-loaded pickle in the seventh and tacked on three runs in the ninth on a Takabe RBI single and a two-run Shogo Nakamura double.

Marines closer Naoya Masuda, the 2021 PL saves leader, surrendered three straight one-out singles in the ninth. Yutaro Sugimoto, the 2021 home run champ, made it 6-3 with a sac fly to deep center before closing it out.

Elsewhere, the SoftBank Hawks whipped the Nippon Ham Fighters 11-4, while Taiwan's Wu Nien-ting drove in three runs for the Seibu Lions in their 6-3 win over the Rakuten Eagles.

In the Central League, the Chunichi Dragons overcame a five-run deficit to beat the Yomiuri Giants 7-6 and snap the league leaders' six-game win streak, while the Hiroshima Carp scored twice in the 10th to beat the DeNA BayStars 5-4, and the Hanshin Tigers crushed the Yakult Swallows 11-3.