The Japanese and the Philippine defense ministers affirmed Thursday that they will further boost security cooperation by conducting joint exercises amid China's increasing clout in the Indo-Pacific region.

The agreement between Defense Minister Nobuo Kishi and his Philippine counterpart Delfin Lorenzana at a meeting in Tokyo comes as Russia's invasion of Ukraine has raised concern about its ramifications for the region.

Kishi and Lorenzana reaffirmed the importance of maintaining and strengthening a free and open Indo-Pacific, and that attempts to change the status quo by force is "unacceptable," the Japanese Defense Ministry said. 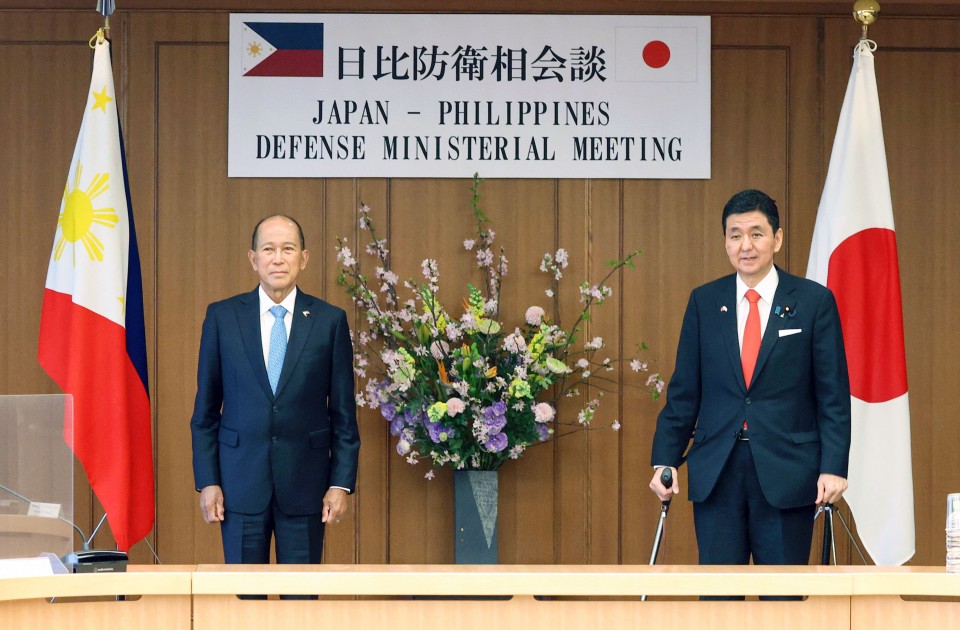 At the outset of the meeting, Kishi said, "Russia's aggression against Ukraine since February is unquestionably a unilateral change of status quo by coercion and a clear violation of international law."

Referring to previous joint exercises by Japan's Self-Defense Forces and Philippine military, Lorenzana responded by saying that they have shown "both countries' dedication and commitment to further strengthen our overall bilateral defense relations."

The first security meeting of its kind between Tokyo and Manila will be held before Philippine President Rodrigo Duterte's single six-year term, during which he has pursued rapprochement with China, ends in late June.

"The Philippines is an island nation like Japan, a littoral state in the South China Sea, and an ally of the United States like Japan. We consider it a very important country," Kishi told reporters after the meeting.

The defense chiefs also agreed to further ramp up defense equipment and technology cooperation between Japan and the Philippines.

The two countries agreed in 2020 that Japan's Mitsubishi Electric Corp. would export air radar systems to the Philippines armed forces.

The Philippines has overlapping territorial claims with China in the South China Sea, where Beijing is building military outposts on artificial islands.

China has also routinely sent ships to waters near the Japan-controlled Senkaku Islands, which Beijing claims and calls Diaoyu, in the East China Sea.

For Japan, the Philippines is geopolitically important as China flexes its muscles beyond what it views as the "first island chain."

The island chain is a defense line drawn by China off the east coast running in an area that includes Japan's Okinawa, Taiwan and the Philippines. The Senkakus, a group of uninhabited islets in the East China Sea, fall within the chain.

Japan eyes 2-plus-2 security talks with Philippines, India in April