Japan eyes 2-plus-2 security talks with Philippines, India in April

Japan is considering hosting separate talks with the Philippines and India next month involving their foreign and defense ministers to beef up security ties amid China's growing maritime assertiveness, diplomatic sources said Wednesday.

Arrangements are being made for Foreign Minister Yoshimasa Hayashi and Defense Minister Nobuo Kishi to hold "two-plus-two" meetings with their Philippine counterparts in early April, and their Indian counterparts in mid-April, both in Tokyo, according to the sources.

The talks are being planned as Russia's invasion of Ukraine spurs concern that China could be emboldened to further intensify its military activities in the Indo-Pacific region, and as North Korea's intercontinental ballistic missile launch last week has increased its missile and nuclear threat. 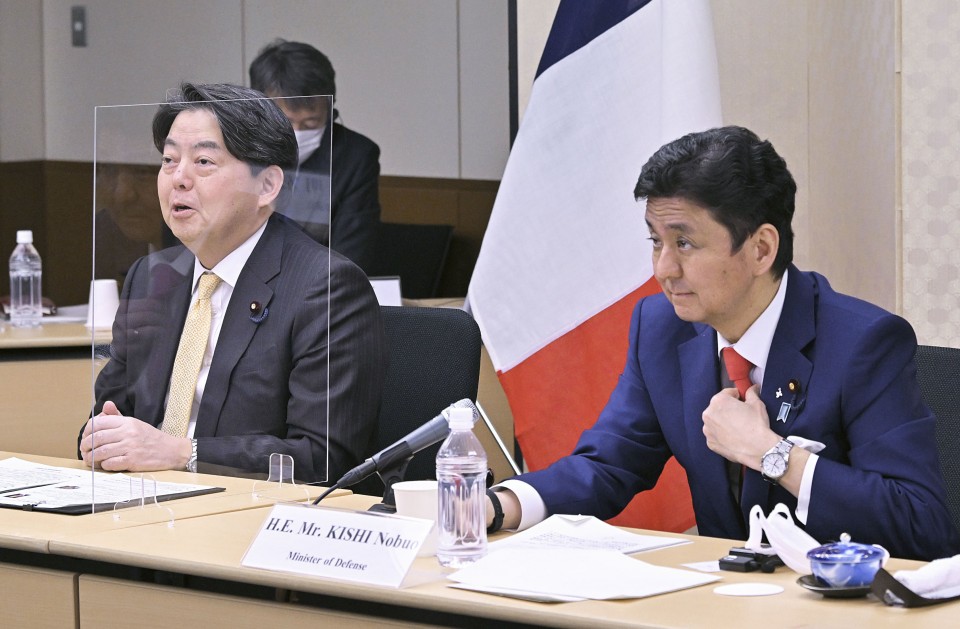 The officials are expected to share the view that no unilateral attempt to alter the status quo in the region should be tolerated, and to renew their pledge to promote a "free and open" Indo-Pacific region, the sources said.

For Tokyo and Manila, the planned gathering will be their first-ever two-plus-two talks. Japanese Prime Minister Fumio Kishida and Philippine President Rodrigo Duterte agreed to consider launching them during phone talks in November.

China has been routinely sending ships to the East China Sea to waters near the Japan-administered Senkaku Islands, which Beijing claims and calls Diaoyu. China is also involved in a territorial dispute with the Philippines and other Southeast Asian nations over the South China Sea.

Tokyo and Manila are also expected to discuss arms exports to the Philippines and support for building up the Philippine military, according to the sources.

Tokyo is also likely to convey its stance to India that Moscow's "aggression" toward Kyiv that began on Feb. 24 is "a serious violation of international law" that rocks the foundation of the international order. India has traditionally had close ties with Russia.

Japan and India held their first two-plus-two talks in New Delhi in November 2019. The two nations signed an acquisition and cross-servicing agreement in September 2020 that enables them to exchange military supplies and logistical support. The accord took effect in July last year.

Besides the Philippines and India, Japan has held two-plus-two security talks with the United States, Australia, Britain, France, Germany, Indonesia and Russia.