Foreign ministers from the Group of Seven industrialized countries on Thursday strongly condemned Russia for "atrocities" in Ukraine following reports that hundreds of civilian bodies have been found in the suburbs of the capital Kyiv.

In a statement issued after their meeting in Brussels, the top officials from Britain, Canada, France, Germany, Italy, Japan and the United States, plus the European Union, agreed to "sustain and increase pressure on Russia by imposing coordinated additional restrictive measures" unless Moscow stops the invasion of its neighbor.

The sixth G-7 foreign ministerial gathering this year, including phone and online talks, came as the international community has expressed outrage over the slaughter of civilians in the town of Bucha near Kyiv and other places, with details emerging after the withdrawal of Russian troops from the areas, although the Kremlin has denied involvement. 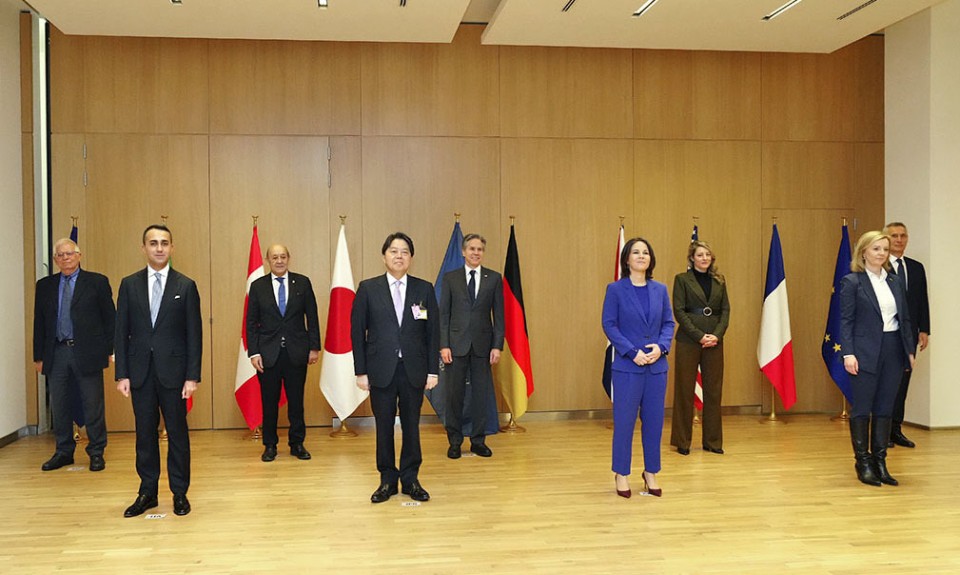 Group of Seven foreign ministers are pictured ahead of their meeting in Brussels, Belgium, on April 7, 2022. (Photo courtesy of Japanese Foreign Ministry)(Kyodo)

"Haunting images of civilian deaths, victims of torture, and apparent executions, as well as reports of sexual violence and destruction of civilian infrastructure, show the true face of Russia's brutal war of aggression against Ukraine and its people," the statement said.

The foreign ministers "condemn in the strongest terms the atrocities committed by the Russian armed forces in Bucha and a number of other Ukrainian towns."

The suspected mass killings have prompted Western nations to apply more pressure on Russia, which launched its invasion on Feb. 24.

As part of a fresh round of sanctions, U.S. President Joe Biden said Wednesday his country will freeze local assets owned by Sberbank and Alfa Bank -- Russia's largest financial institution and private bank, respectively -- and entirely prohibit U.S. persons from doing business with them.

Britain has also decided to take similar punitive steps against Moscow, while the EU has proposed a ban on coal imports from Russia.

The G-7 ministers said in the statement that those responsible for the atrocities in Ukraine "will be held accountable and prosecuted," while welcoming the ongoing work by international bodies, such as the International Criminal Court's Office of the Prosecutor, to investigate and gather evidence of potential war crimes.

They also renewed their commitment to providing further support for Ukraine, including "military equipment and financial means," as well as help for Ukraine's neighbors that have been accepting an influx of refugees and providing humanitarian assistance to those fleeing the war.

As China has refrained from criticizing Russia, opposing sanctions against Moscow even as evidence suggesting its culpability for war crimes has come to light, the G-7 nations pledged to "work together to stop any attempts to circumvent sanctions or to aid Russia by other means."

They also expressed concern about "other countries and actors that have amplified Russia's disinformation campaign" in apparent attempts to deflect criticism of Moscow's aggression against Ukraine.

On the sidelines of the G-7 talks, Japanese Foreign Minister Yoshimasa Hayashi met with U.S. Secretary of State Antony Blinken and agreed to work together not to allow any attempt to alter the status quo in East Asia by force.

The two sides also agreed to hold exchanges on issues related to China amid Beijing's increasing military assertiveness and cooperate toward realizing the vision of a free and open Indo-Pacific region.

The G-7 talks and bilateral exchanges were held on the fringes of a two-day foreign ministerial meeting through Thursday of the North Atlantic Treaty Organization in the Belgian capital.

Other than the 30 NATO members, foreign policy chiefs from the body's Asia-Pacific partners -- Australia, Japan, New Zealand and South Korea -- as well as from Finland, Georgia, Sweden, Ukraine and the EU were also invited to the second day of the meeting.

At the expanded NATO session, Hayashi called for strengthening security cooperation between Japan and NATO at a time when Russia's aggression in Ukraine poses serious challenges to the international order, according to the Japanese Foreign Ministry.

Hayashi was quoted by the ministry as saying the security of Europe and the Indo-Pacific region "can never be discussed separately," alluding to attempts by Russia and China to alter the status quo in their respective regions by force or coercive means.

Becoming the first top diplomat from Japan to attend NATO talks, Hayashi also criticized some countries for "directly or indirectly" backing Russia over its invasion of Ukraine and said Beijing has yet to condemn Moscow for its acts, the ministry said.

Later in the day, the G-7 leaders also released a joint statement in which they vowed to "expedite" plans to cut energy dependence on Russia by phasing out and banning Russian coal imports to punish Moscow for committing "appalling" atrocities in Ukraine.

The G-7 will also ban new investments in energy and other key sectors of the Russian economy, they said.

U.S. unveils fresh round of sanctions on Russia in alignment with G-7