A major fisheries group in Japan told Prime Minister Fumio Kishida Tuesday it remains firmly opposed to the planned discharge of treated water from the crippled Fukushima nuclear power plant into the sea due to concern over negative impact on the industry.

"I told (Kishida) our position to oppose (the discharge) remains exactly the same," Hiroshi Kishi, head of the national fisheries cooperatives, told reporters after visiting the prime minister's office.

It was the first meeting between the head of the national fisheries cooperatives and Japan's prime minister since April last year when the decision was made to release treated low-level radioactive water into the sea from around the spring of 2023. 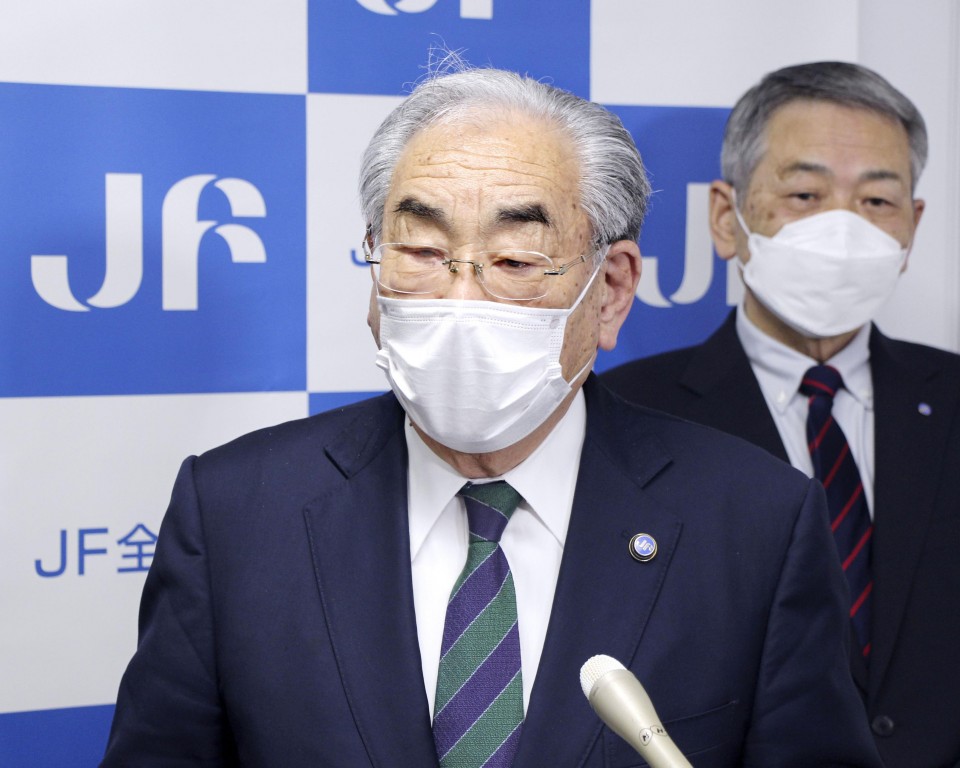 Hiroshi Kishi, head of the national fisheries cooperatives, speaks to reporters after a meeting with industry minister Koichi Hagiuda in Tokyo on April 5, 2022. (Kyodo)

Then Prime Minister Yoshihide Suga announced the policy without gaining consent from the fisheries group.

Kishida said the government will be fully responsible for the impact of the discharged treated water and vowed to support fishermen, according to Kishi and officials who attended the meeting.

"Steady progress in the decommissioning (of the Fukushima plant) is a prerequisite for reconstruction (of the affected areas), and we cannot avoid the issue of how to dispose of treated water," Kishida said. "We will continue to exchange opinions and will make all-out efforts to tackle harmful rumors."

Earlier in the day, Kishi conveyed similar concern to industry minister Koichi Hagiuda. "We just hope people in the fisheries industry will be able to continue fishing with peace of mind," he told reporters after seeing Hagiuda in the federation's office in Tokyo.

During the meeting, Hagiuda handed the group answers in writing to five requests it had submitted.

The government pledged in the document to ensure the safety of treated water as well as take appropriate measures to prevent and tackle reputational damage to food products, among others.

Hagiuda also told the federation it will stick to its promise to the fishermen that the Fukushima plant will not release the water into the sea without their understanding.

The minister told reporters that Kishi "understands the recovery of Fukushima will not complete without disposal of treated water" and expressed hope that the government will "clear anxiety of fishermen by taking appropriate measures."

The government has already set up a 30 billion yen ($245 million) fund to support the fisheries industry and pledged to buy seafood when demand falls due to harmful rumors.

In the meantime, more than 1 million tons of treated water has accumulated on the premises of the plant operated by Tokyo Electric Power Company Holdings Inc. after a massive earthquake and tsunami triggered a triple meltdown at the Fukushima Daiichi plant in March 2011.

The water, which was contaminated after being pumped in to cool melted reactor fuel, is treated through an advanced liquid processing system that removes radionuclides except for tritium.

Before discharge, it will be diluted with seawater below one 40th of the current regulations, according to the government. It will also be lower than the World Health Organization's tritium limit in drinking water.

Earlier this year, the International Atomic Energy Agency evaluated the safety of the release of treated water by sending a task force to the Fukushima plant to enhance transparency of the discharge plan and gain international understanding.

In addition to Japan's local fishing communities, neighboring China and South Korea have also expressed their worries over the water discharge plan.