The International Atomic Energy Agency said Friday it will release a report in April on some findings of its mission to review the Japanese government's plan to discharge treated low-level radioactive water into the sea from the crippled Fukushima nuclear plant.

The five-day safety review in Japan, which the task force assured would be conducted objectively and on a scientific basis, is considered crucial for the government to obtain an understanding of the plan among the international community and the Japanese public.

Neighboring China and South Korea, as well as the fishery industry in Japan, have expressed worries and opposition against the plan. 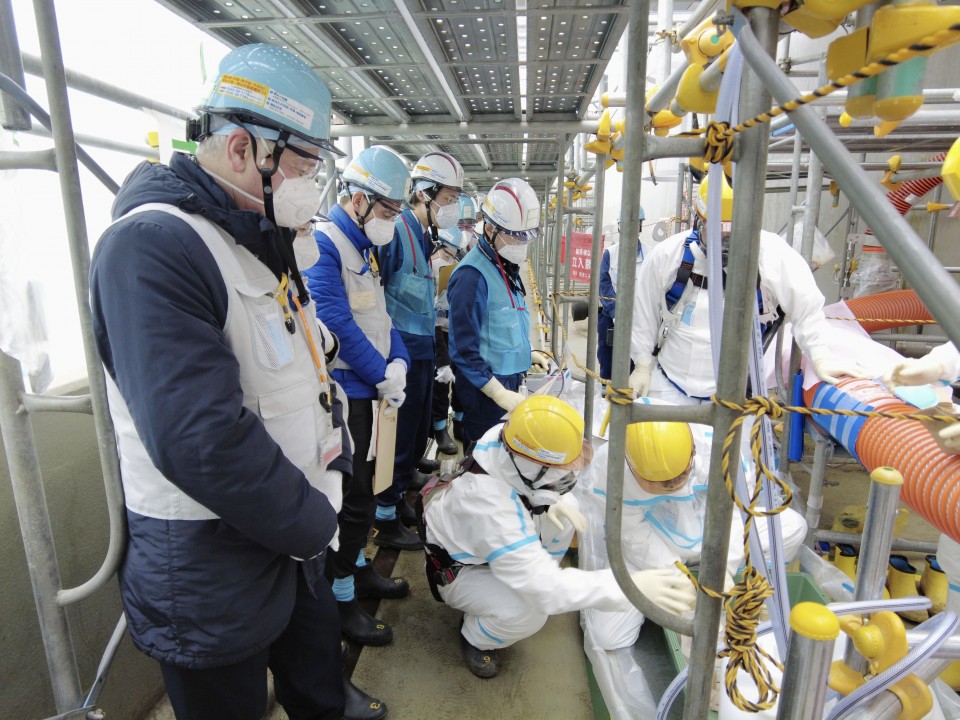 The IAEA task force of experts was in Fukushima Prefecture, northeastern Japan, earlier in the week to review the handling of treated water at the Fukushima Daiichi nuclear power plant damaged by the 2011 earthquake and tsunami.

"This is a significant step forward in the task force's work aimed at assessing their adherence to the IAEA safety standards which contribute to high levels of safety worldwide," said Deputy Director General Lydie Evrard, head of the IAEA's Department of Nuclear Safety and Security, during a virtual press conference.

The IAEA team observed sampling of treated water in tanks by the plant operator Tokyo Electric Power Company Holdings Inc., among other things, on Tuesday. Some 50 liters of the water will be analyzed separately by the agency's laboratories.

Gustavo Caruso, chair of the task force, said water samples collected before, during and after the discharge will be analyzed at laboratories in Austria and Monaco to verify the levels of radioactivity in the treated water stored in tanks as well as in the ocean.

Tokyo decided last April to gradually discharge the water, treated through an advanced liquid processing system that removes radionuclides except tritium, into the Pacific Ocean after dilution from around 2023 spring.

Water that has become contaminated after being pumped in to cool melted reactor fuel at the plant has been accumulating at the complex, also mixing with rainwater and groundwater at the site. Tanks holding the water occupy a large area of the complex and are nearing full capacity.

The IAEA has pointed out that sustainable water management is key for continued progress in the decommissioning of the severely damaged Fukushima plant.

The task force, established last year, is made up of independent and highly recognized experts with diverse technical backgrounds from various countries including China and South Korea, as well as personnel from IAEA departments and laboratories, according to the agency.

Also during their stay in Japan, the task force inspected a site where facilities to discharge treated water will be built, as well as heard details of the plan from TEPCO and the Ministry of Economy, Trade and Industry.

The Vienna-based international agency will conduct a separate mission towards the end of March to discuss the regulatory aspects of the plan with Japan's Nuclear Regulation Authority, it said.

The agency will release a comprehensive report with conclusions before the water release starts, after carrying out follow-up missions to Japan later this year and next year.

Earlier this week, a Chinese Foreign Ministry official told reporters that the country hopes for an independent evaluation and inspection in all of the processes by the IAEA.

IAEA Director General Rafael Mariano Grossi has said, "As a scientific and technical organization, we will be fully transparent and independent in our reviews and reporting. The world will know what is going on at all times."