Former ozeki Takayasu came out on top of a marathon bout against Hoshoryu to maintain his perfect record after 10 days at the Spring Grand Sumo Tournament on Tuesday, when new ozeki Mitakeumi took a step back from the title race with his second defeat.

No. 7 maegashira Takayasu won his fourth straight bout in his career against the new komusubi Hoshoryu (4-6), but the sole leader was made to work hard against the nephew of former Mongolian yokozuna Asashoryu at Edion Arena Osaka in a battle lasting 71 seconds. 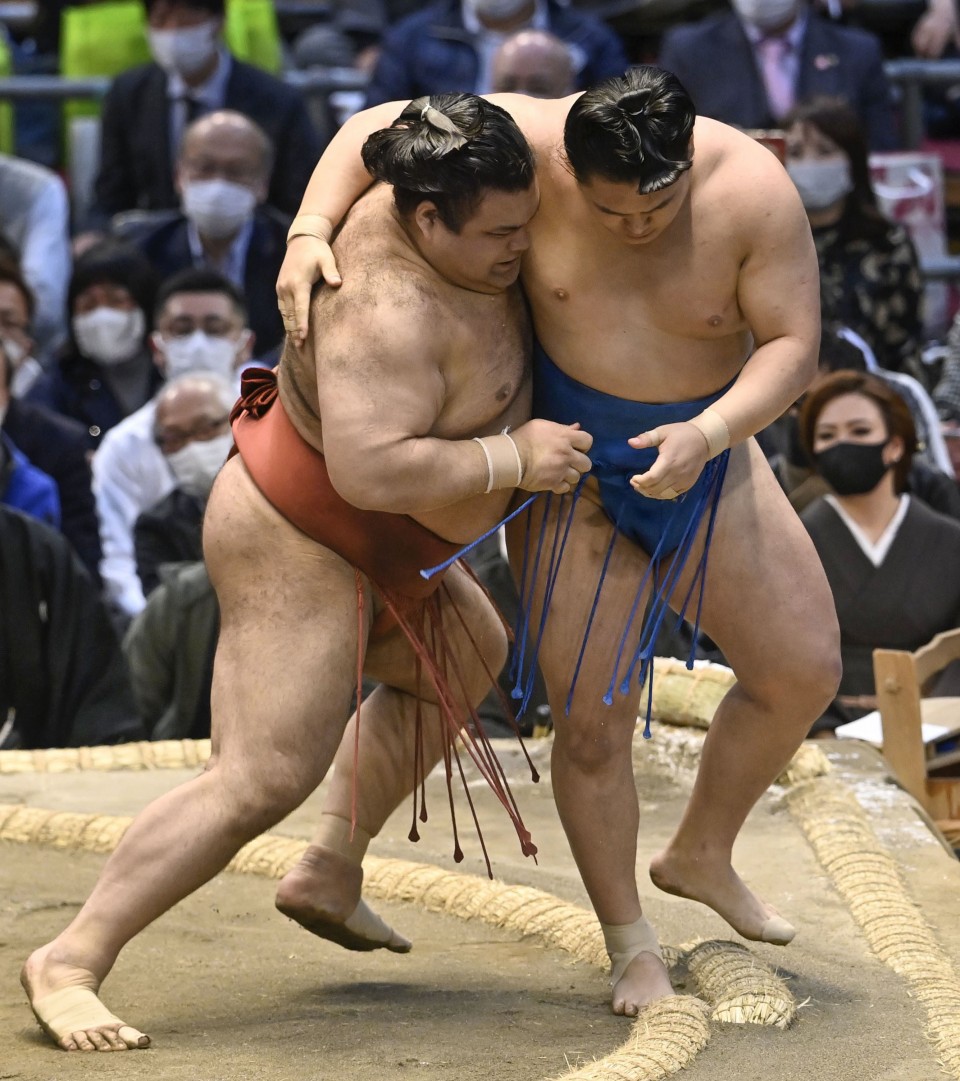 Takayasu (L) defeats Hoshoryu on the 10th day of the Spring Grand Sumo Tournament in Osaka on March 22, 2022. (Kyodo)

Hoshoryu opened with a sharp low drive and got his head to the chest of Takayasu, who was left in a tight spot and needed a forceful left armlock throw to even up his body position in the middle of the raised ring.

The energetic Hoshoryu then attempted two slap downs that Takayasu just about managed to survive before the latter finally got his hand on the left overarm belt hold, forcing his diminutive counterpart to the edge and out at long last.

Three wrestlers started the day with 8-1 records, and the New Year meet champion Mitakeumi was the only one to suffer defeat on the day, falling to his old foe Hokutofuji in a surprisingly one-sided bout.

No. 6 maegashira Hokutofuji (5-5) stepped to his left after the opening charge to grab the left underarm belt hold before also managing to get his right hand on the off-balanced ozeki's belt to swiftly force him out, evening their career head-to-head records at 12 wins each.

"I knew the ozeki's initial charges are strong. I was intent on getting them head-on before countering while moving to a position I like," Hokutofuji said. "It was great to win as it was my son's first birthday today."

New sekiwake Wakatakakage (9-1) remains a win behind Takayasu after overcoming a tricky opponent in the shape of his fellow new sekiwake Abi, who had won 12 bouts each in two meets since his return to the top-tier makuuchi division in November.

In their first encounter, Abi (6-4) looked to gain the upper hand by reeling off aggressive shoves. But Wakatakakage kept his low center of gravity and stood firm before launching a counter to force out his bigger counterpart, unperturbed by bleeding from his forehead.

No. 6 Kotonowaka was another wrestler to improve to 9-1 after navigating a difficult start to down No. 1 Daieisho (5-5).

Daieisho had the better of the opening charge, and his thrusts to neck and chest forced Kotonowaka to retreat toward the edge, but the title contender had the calmness to move slightly to his right to slap down his rival.

Ozeki Takakeisho (7-3) moved within one win of retaining his status at the sport's second-highest rank after outlasting No. 5 Takarafuji (3-7).

The demotion-threatened "kadoban" ozeki Takakeisho, needing eight wins here, was forced to the edge once and remained on the back foot against the rank-and-filer, but his well-timed pull-down was enough to earn him a precious win.

The tide is turning for another kadoban ozeki Shodai (5-5), who won his fourth straight bout to even his mark after a dismal start to the basho.

Facing No. 4 Endo (6-4), Shodai seemed slack at the start when his opponent easily got hold of the left underarm belt hold. But Shodai's instinctive left beltless arm throw was enough to knock Endo off balance en route to a push-out win.

Komusubi Takanosho (2-8) snapped his seven-bout losing streak, showing good footwork to chase around nimble No. 1 Ura (1-9) before pushing him down.