The Self-Defense Forces dispatched personnel to provide fresh water in areas in Miyagi and Fukushima prefectures, part of the region devastated by the killer M9.0 quake and ensuing tsunami 11 years ago on March 11, 2011.

About 43,000 houses in the prefectures remained without water as of 11:30 a.m. Friday, according to the health ministry. 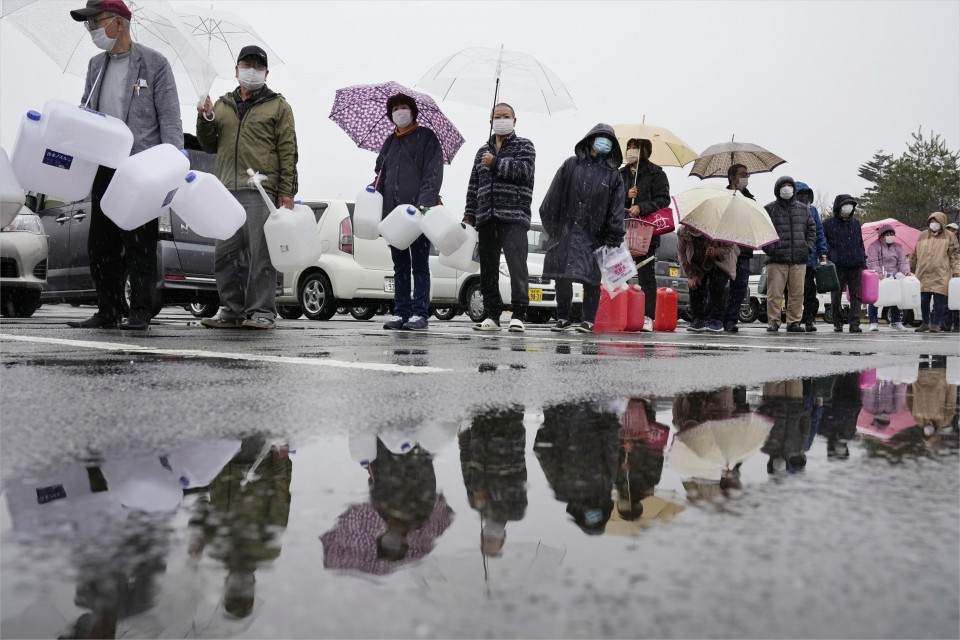 People wait in line to receive water in the rain in the Fukushima Prefecture city of Minamisoma, northeastern Japan, on March 18, 2022, after water supplies in the area were cut following a powerful earthquake two days before. (Kyodo) ==Kyodo

In the Semine area of Kurihara, Miyagi, where about 1,500 houses were left without access to water, the SDF set up a water station Friday morning following the arrival of a tank trailer carrying 1 ton of supply.

"I had no idea how long it would take for the water service to be restored so I'm really grateful the SDF came near my home," said Fukuo Goto, a 71-year-old farmer in Kurihara, who visited the station with seven empty plastic bottles.

"I need water to use the toilet and take a bath."

The SDF also began preparations to provide water at places such as elementary schools and parks in Soma, Fukushima, where most residents were still cut off.

East Japan Railway Co. continued efforts to fully resume its Tohoku Shinkansen services. The derailment of a bullet train in Miyagi Prefecture has forced it to suspend some operations in the northeast, including runs between Tokyo and Sendai, a major business hub.

JR East says it cannot say when bullet train operations will return to normal as there is damage to equipment such as electric poles on top of the derailment. The recovery efforts may continue at least until the end of the month, it said. 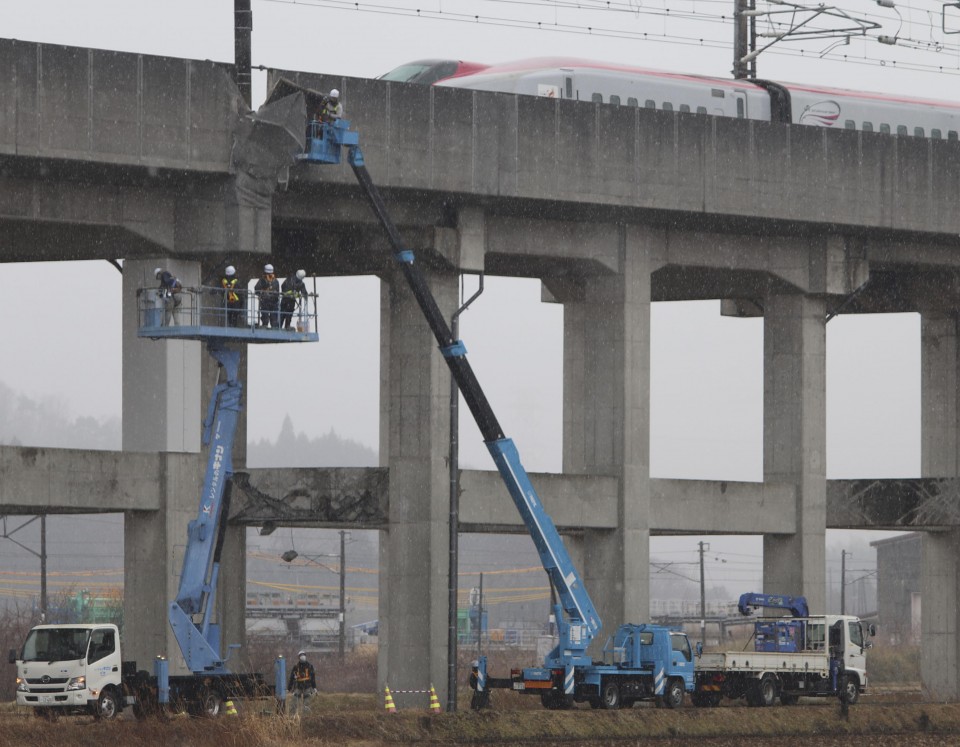 Workers engage in efforts to resume services on March 18, 2022, near a shinkansen train derailed by a magnitude 7.4 earthquake in Shiroishi, Miyagi Prefecture, two days earlier. (Kyodo)

In sleet, about 10 workers gathered underneath the elevated railway tracks where the derailed train is located Friday morning in an effort to assess damages on bridge columns supporting the elevated tracks.

An expressway bus operator increased the number of Tokyo-bound busses from Sendai Station in Miyagi, a local transportation hub, to respond to increased demand caused by the derailment.

Toyota Motor Corp. said Friday it will halt car production at 11 domestic factories for up to three days from Monday as it is having difficulty in procuring parts from suppliers in the region.

The earthquake caused power outages in northeastern and eastern Japan, affecting more than 2.2 million households at one point.