A Japanese rail operator says catastrophe was avoided on a high-speed shinkansen bullet train derailed by a recent powerful earthquake off northeastern Japan with no injuries reported, proving its safety once again thanks to measures put in place after major quakes in the past.

The temblor off the Fukushima coast stranded the train on top of a viaduct while traveling between Fukushima Station and Shiroishizao Station. 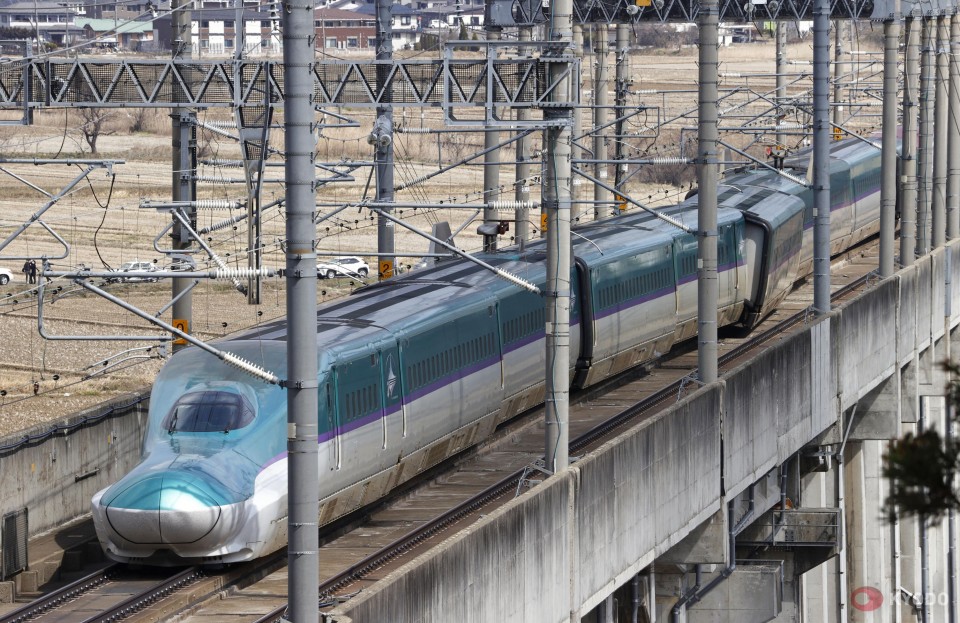 Photo taken on March 17, 2022, shows carriages on a Tohoku Shinkansen bullet train that were derailed a day earlier by a powerful magnitude-7.4 earthquake in Shiroishi, Miyagi Prefecture. (Kyodo)

According to the Ministry of Land, Infrastructure, Transport and Tourism, it is the second derailment of a bullet train carrying passengers since October 2004 when an earthquake derailed a Joetsu Shinkansen in Niigata Prefecture, northwest of Tokyo.

The early detection and emergency brake systems have already proved effective in preventing a serious accident in 2011 when the M9.0 massive quake struck the same region.

When the Great East Japan Earthquake occurred in 2011, 27 Tohoku Shinkansen trains were running and all came to a complete stop safely. Only a test train running at low speed in Sendai derailed.

According to JR East, the systems make use of seismographs installed along the shinkansen tracks to detect and halt moving trains during temblors.

The latest version of the systems incorporate data from the Japan Meteorological Agency's earthquake warning system and seismometers installed on the ocean floor.

JR East also developed special metal fittings following the 2004 Niigata derailment. The L-shaped fittings on the trains catch rails during events such as earthquakes, minimizing the amount of movement and risk of derailment or collision with other objects along the tracks.

As for the rails, the company has taken steps to keep them from coming loose and causing trains to roll over.

A transport ministry official said the measures worked as intended, but damage to related equipment such as electrical poles exposed shortcomings in current earthquake-resistant infrastructure.

Following an M7.3 quake off the Fukushima coast in February 2021, damage to electrical poles occurred in areas outside so-called priority zones where JR East had been concentrating efforts to improve earthquake resistance of infrastructure, picking locations likely to experience particularly strong shaking based on active fault data gathered from the 2011 quake and 1995 Great Hanshin Earthquake in western Japan.

The operator said it would review the expanding of its priority zone and double the pace of quake fortification for electrical poles, but that it will take seven more years to complete.

Tohoku Shinkansen services between Nasushiobara Station and Morioka Station have been suspended. It will take time to understand the full extent of the damage and make the necessary repairs, and services are unlikely to resume within March, JR East said.

The company said Friday the quake damaged rails at 10 locations and 24 electric poles, while severing overhead power lines at two locations. It confirmed 20 cases of structural damage to other facilities such as stations and viaducts.