Japan secured a berth at a seventh straight World Cup on Thursday after substitute Kaoru Mitoma struck a pair of late goals to deliver a 2-0 win over Australia in their penultimate Asian qualifying group match in Sydney.

The result means Hajime Moriyasu's Samurai Blue squad will finish the final Asian qualifying phase no worse than second in Group B, ensuring direct qualification to the 2022 World Cup in Qatar.

The Socceroos, managed by Moriyas's former Sanfrecce Hiroshima teammate Graham Arnold, will finish third and face the uncertainty of a qualification playoff in hopes of reaching the tournament starting in November. 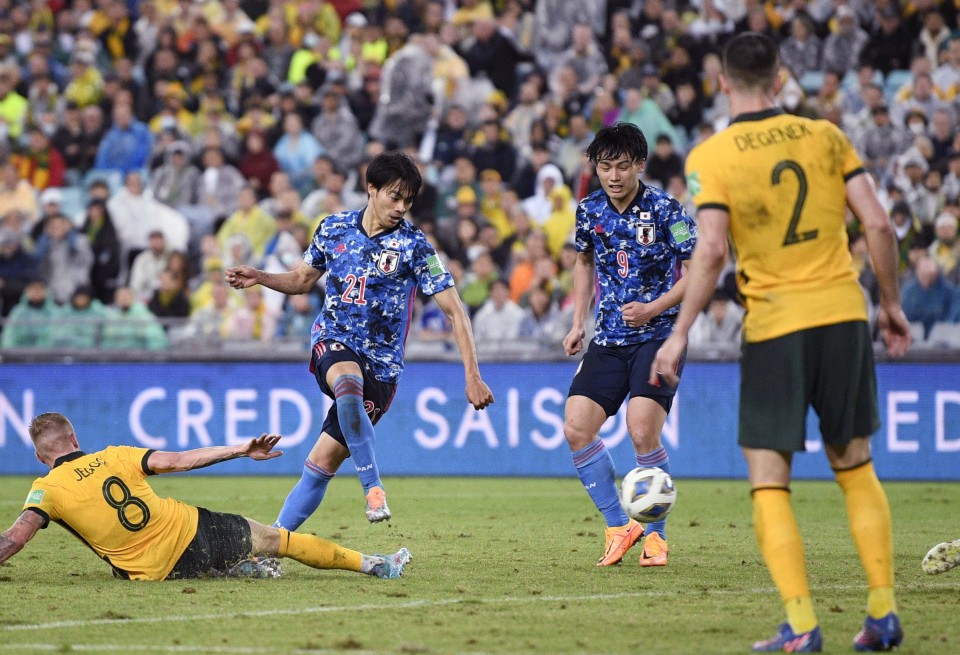 Japan's Kaoru Mitoma (2nd from L) opens the scoring late in the second half of a Group B football match against Australia in Sydney on March 24, 2022, in the final group-phase round of Asian qualifying for the 2022 World Cup in Qatar. (Kyodo) ==Kyodo

Japan dominated every facet at a soggy Stadium Australia, but the contest looked bound for a scoreless draw until Mitoma's 84th-minute introduction swung the game for the visitors.

The 24-year-old winger for Belgian side Royale Union Saint-Gilloise found the net in the 89th minute and again in the fourth minute of injury time to underscore his status as one of Japan's most exciting talents.

He connected with his former Kawasaki Frontale teammates Hidemasa Morita and Miki Yamane on the opener, the former passing inside the area to the latter, who provided a first-time cutback for Mitoma to side-foot home.

"I gave it everything I had tonight," Mitoma said. "I don't remember (the first goal), only running over to the bench instinctively."

Mitoma demonstrated his outstanding dribbling skills to complete his brace, beating multiple defenders as he danced from the left of the area and skidded a shot in off Australian keeper Mat Ryan.

"It was thanks to strong contributions from every player that we got the win," said Mitoma, on loan to Union SG from English Premier League side Brighton.

Despite the visitors dictating most of the contest, it was the men in gold who first put the ball in the net before Bahraini referee Nawaf Shukralla quieted the home fans.

What appeared to be a 25th minute goal for defender Gianni Stensness was wiped away after teammate Trent Sainsbury was ruled to have fouled Japan keeper Shuichi Gonda in the air as the pair leapt for a corner kick.

Japan had gotten to a quick start in the rainy conditions, with Takumi Minamino on target in the opening minute with the first of his several chances.

The Liverpool attacker posed a danger throughout the half, firing wide after some skillful footwork inside the area, then hitting the bottom of the crossbar with a flying header.

Substitute Ayase Ueda fired wide after coming off the bench in the second half, while Minamino let a late winner go begging when his point-blank shot was blocked by a defender.

Moriyasu made the pivotal change with his final set of substitutions, when he brought on Mitoma for Minamino.

Japan captain Maya Yoshida, who returned to central defensive duties after missing the previous two qualifiers through injury, said he felt a "sense of relief" after clinching qualification.

"We talked about making sure we won today and deciding our World Cup spot," the 33-year-old Sampdoria defender said. "Now I live to fight a little longer with the national team."

With two wins from two over regional rivals Australia in qualifying, including a 2-1 victory at home in October, Japan will wrap up their Group B campaign against Vietnam at Saitama Stadium on Tuesday. 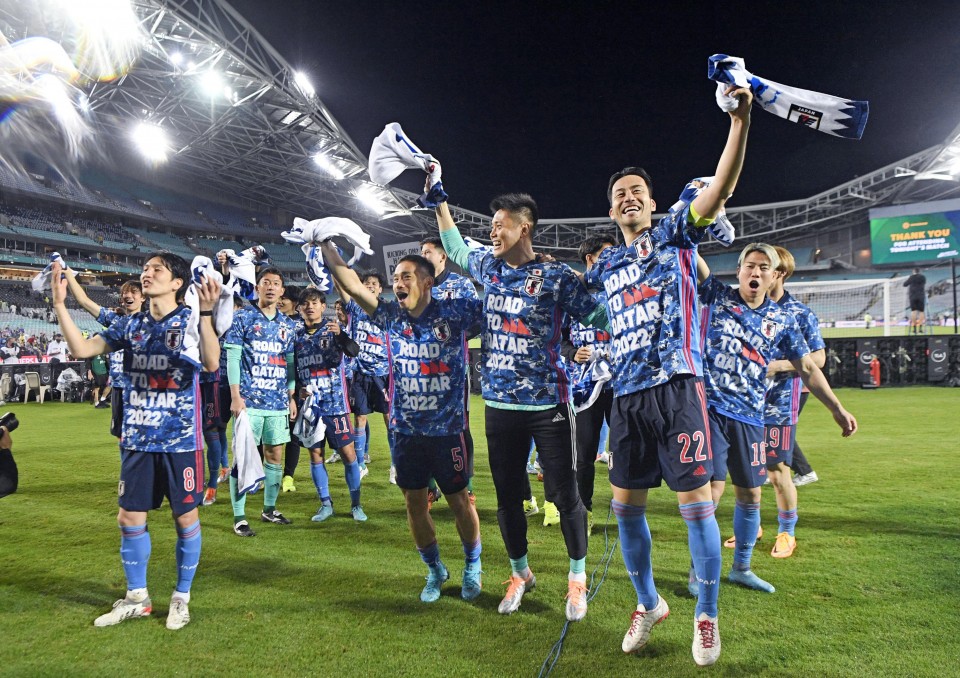 Japan players celebrate after securing a berth at the World Cup football finals in Qatar with a 2-0 win over Australia in Sydney on March 24, 2022. (Kyodo) ==Kyodo