What began as a rocky World Cup qualification journey culminated in scenes of jubilation for Japan on Thursday at a waterlogged Stadium Australia in Sydney.

A late brace from super sub Kaoru Mitoma turned a stalemate into an emphatic 2-0 victory for the Samurai Blue over Group B rivals Australia, clinching a seventh straight World Cup berth with a game to spare. 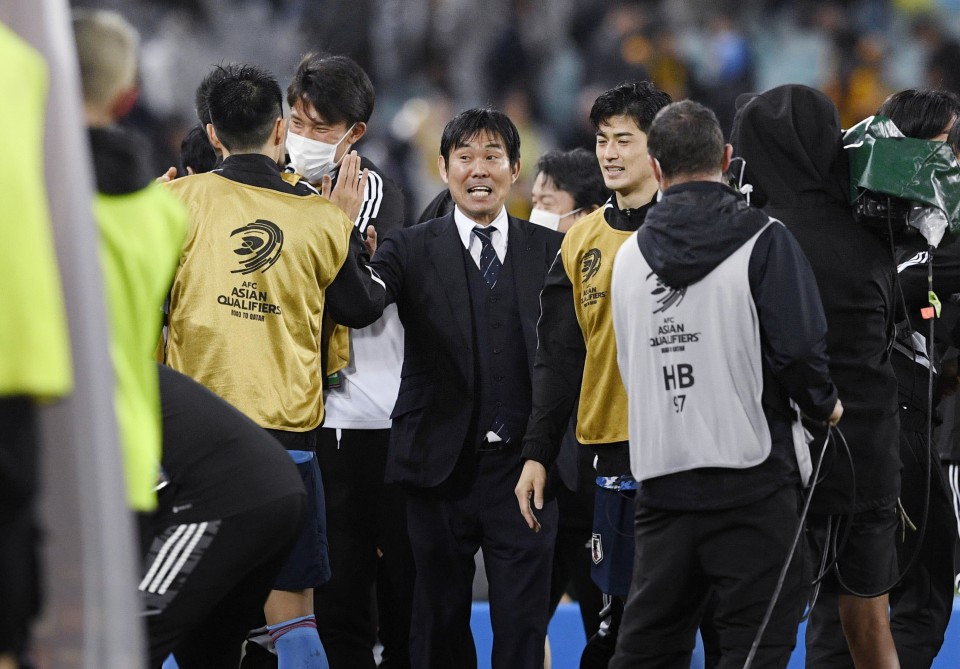 Japan coach Hajime Moriyasu (C) celebrates with his players after securing a berth at the World Cup football finals in Qatar with a 2-0 win over Australia in Sydney on March 24, 2022. (Kyodo) ==Kyodo

The result marked a turnaround from early in the final Asian qualifying phase for the 2022 World Cup in Qatar, when manager Hajime Moriyasu and his team faced heavy scrutiny for losing two of their first three matches.

A shock 1-0 home loss to Oman on Sept. 2 in their opening Group B contest was followed two games later by a 1-0 defeat away to Saudi Arabia on Oct. 7, when Japan leaked a late goal after Gaku Shibasaki's errant back pass was picked off by the hosts.

Japan got their qualifying campaign on track by winning the first of their two meetings with Australia 2-1 at Saitama Stadium on Oct. 12.

The hosts came into that clash third in the group, trailing second-place Australia by six points. With the contest seemingly bound for a draw, a late own goal gifted Japan three vital points.

Moriyasu's men have won every game since, lifting much of the pressure from the 53-year-old manager, who also faced criticism for failing to guide a strong Japanese Olympic squad to the podium at the Tokyo Games last summer.

"I disregard the criticisms directed at me, but I accept the support I receive from any corner," former Japan international Moriyasu told Kyodo News in a recent interview.

"Everything is about Japan winning and making progress, it's not about me."

Among the knocks from his detractors, Moriyasu has at times stuck rigidly to the same team selections and tactics since taking the reins of the senior national side after the 2018 World Cup.

And while Thursday's decisive victory in Sydney has sparked celebrations among Samurai Blue fans, it may not quell some of the familiar criticisms of the man in charge.

The turning point for the match was the 84th-minute introduction of Mitoma, the 24-year-old rising star under contract with English Premier League side Brighton and currently on loan to Belgium's Royale Union Saint-Gilloise.

The winger with a devastating dribble has repeatedly shown himself to be one of Japan's most impactful players for both club and country, but he has never started a game for the Samurai Blue.

His game-winning performance will heighten calls for his inclusion in the starting XI, but as Moriyasu has shown in his time at the helm, the manager's decision-making is immune to outside noise.

With World Cup qualification in the bag, Moriyasu has set his sights on Japan's best-ever performance at the tournament kicking off in November.

There he will revisit the scene of one of his most painful memories as a player, the infamous "Tragedy of Doha," when Japan drew 2-2 draw with Iraq and failed to advance from the final qualification round for the 1994 World Cup.

"Doha can be turned into a scene of joy, but only if we can achieve Japan's best result and reach the quarterfinals," Moriyasu said.