Pokemon bread has sparked a craze in South Korea on its return to shelves for the first time in some two decades, driven mainly by the childhood nostalgia of fans of the global hit animation series "Pocket Monster" but also winning new admirers.

About 4.7 million packs of the bread have sold in less than a month since it returned to stores in late February. It comes with stickers of characters from the beloved Japanese animation and video game series, which made its debut in South Korea in 1999.

With stores quickly selling out, queues have formed and even celebrities have been scrambling to buy the cake-like bread. RM, the leader and member of famed K-pop boy band BTS, took to social media to say he had to go to eight convenience stores to finally get hold of some. 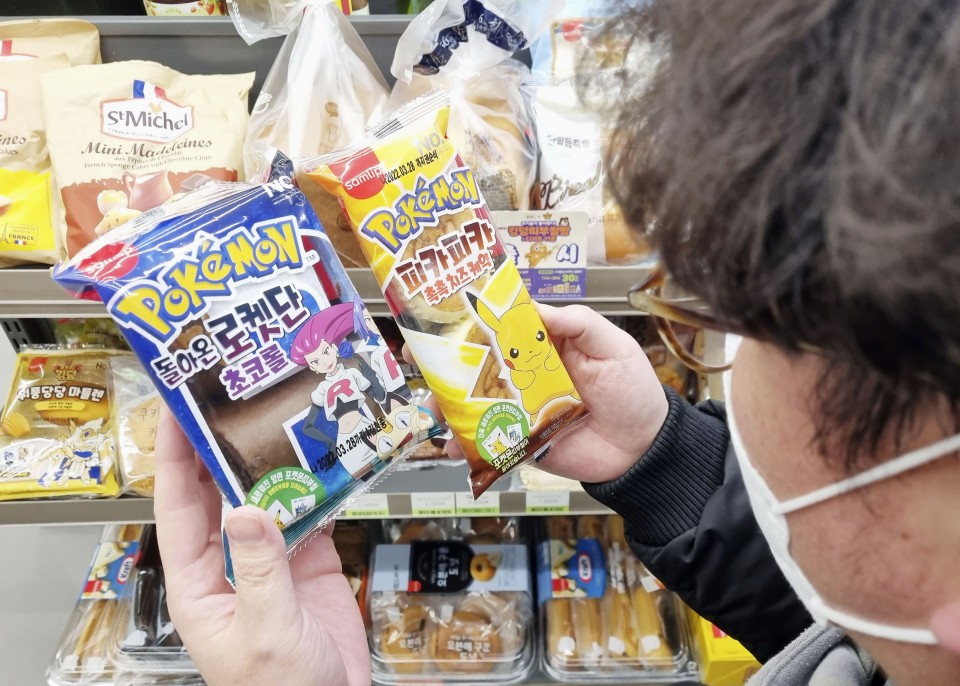 A shopper looks at Pokemon bread sold at a convenience store in Incheon, South Korea, on March 22, 2022 (Kyodo)

The bread, which was first released in 1998 and was sold until around the early 2000s, returned to the market due to consumer demand, according to its manufacturer.

Kim Chae Ran, a 29-year-old resident of Seoul, visited three different convenience stores without luck. She said she was desperate to buy it "due to nostalgia about my childhood" and would try suburban areas as there are "more chances of finding it where many elderly people live."

An official from South Korean bakery giant SPC Group, which owns SPC Samlip, the firm that produces the Pokemon bread, told Kyodo News by phone that the current craze is driven by support across generations from teenagers to those in their 40s.

"South Koreans who were born in the 1990s grew up watching Pokemon, and the kids are now watching the series on Netflix. Those in their 40s, like me, are searching for the bread for our kids. As a result, the demand from almost all generations grew," the official said.

A single pack costs 1,500 won ($1.2) but with the bread often selling out due to the high demand, the accompanying Pokemon character sticker can later sell for 10 times the price.

Park Soo Young, a 30-year-old nurse, recalled how she initially purchased the product because of childhood memories of Pokemon, which follows the adventures of a boy and his "pocket monster" companion Pikachu and their various battles.

"Now I'm also enthusiastically searching for stickers that are rarely found so that I can sell them online at higher prices to those who want them more than I do," she said.

The craze is showing no signs of ceasing. The SPC official said the company is running every production line possible to meet demand but is finding it difficult to keep up.