With its resumption of intercontinental ballistic missile launches, North Korea appears resolved to go full steam ahead with bolstering its military capabilities at a time when the U.N. Security Council has become dysfunctional amid Russia's invasion of Ukraine.

Concerns are growing that Thursday's launch may herald more provocative actions from Pyongyang, such as conducting its first nuclear test since 2017, with South Korean President-elect Yoon Suk Yeol pledging to put more pressure on the North in tandem with its security ally, the United States.

By taking moves certain to heighten security tensions in the region, it is believed that North Korean leader Kim Jong Un will try to cajole Washington into easing economic sanctions against his country and bring to a halt U.S.-South Korea joint military exercises that Pyongyang has slammed as "rehearsal for war." 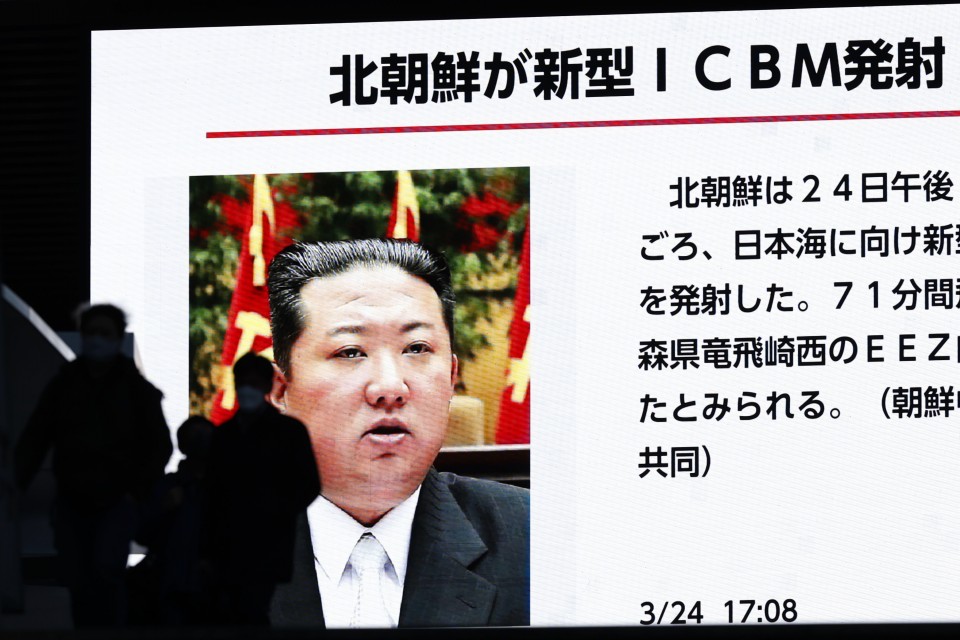 A large screen on a street in Tokyo shows news that an intercontinental ballistic missile test-fired by North Korea fell within Japan's exclusive economic zone in the Sea of Japan on March 24, 2022. (Kyodo) ==Kyodo

On Thursday, North Korea fired a new type of ICBM in the biggest-scale launch by the country in terms of flight time and altitude, which exceeded 6,000 kilometers, the Japanese government said.

In November 2017, Pyongyang launched what it called its "most powerful" ICBM, capable of delivering a nuclear warhead anywhere in the continental United States. The firing came following its sixth nuclear test in September that year.

Afterward, the five permanent members of the U.N. Security Council, including Russia and China, which are friendly to North Korea, strengthened sanctions aimed at thwarting Pyongyang's nuclear and missile ambitions, taking a heavy toll on the nation's economy.

But the Security Council has been "effectively dead" since Russia attacked Ukraine on Feb. 24, a diplomatic source said, principally with the veto-wielding member obstructing the council's work related to its invasion.

Kim may believe that "now is a good chance" to test-fire ICBMs as the Security Council, which has been divided and unable to act over Russia's aggression against Ukraine, is "unlikely to join hands" to impose further sanctions on North Korea, the source said.

As the administration of U.S. President Joe Biden and its security allies are forced to focus on the Ukraine crisis, North Korea is "certain to continue testing weapons in accordance with its plan," determined at a key ruling party gathering in January 2021, the source added.

At the first congress of the Workers' Party of Korea in nearly five years, Kim promised to develop ICBMs that use solid fuel to shorten the time required for prelaunch preparations while vowing to secure reconnaissance abilities with satellite systems.

Firing long-range ballistic missiles that carry warheads and rockets capable of delivering satellites use similar technology. Pyongyang is banned from launching ballistic missiles under Security Council resolutions that have imposed sanctions on the country.

North Korea had apparently refrained from firing an ICBM for the past few years, given that Russia and China had called on the United States to relieve economic sanctions on Pyongyang on the grounds that it had suspended nuclear and long-range ballistic missile tests.

Recently, however, North Korea had hinted at resuming nuclear and ICBM tests, saying it might restart all "activities" it had temporarily suspended to build trust with former U.S. President Donald Trump, asking Washington to drop its "hostile policy."

North Korea, meanwhile, has conducted a spate of weapons tests since early this year, as direct negotiations between Pyongyang and Washington on denuclearization and sanctions relief have been at a standstill for more than two years.

With the Russia-Ukraine war escalating, many analysts were saying North Korea would launch an ICBM before the 110th anniversary on April 15 of the birth of Kim Il Sung, the nation's late founder and the current leader's grandfather.

Another diplomatic source said that in addition to the evolving situation surrounding Ukraine, the victory of Yoon of South Korea's conservative main opposition party in the March 9 presidential election has also prodded Kim to speed up the pace of weapons tests. Yoon is set to take office in May.

The latest ICBM launch was a "warning" to the incoming South Korean government under Yoon, which could deepen its security ties with the United States to tackle the North, the source said.

Incumbent President Moon Jae In sought reconciliation with the North, holding summits with Kim three times from April 2018 through September that year.

The source said that in the worst-case scenario, North Korea might stage its seventh nuclear test in the near future, as the Ukraine crisis has given Kim a lesson that nuclear-armed countries "would not be attacked" by the United States or whoever he regards as enemies.

"Ukraine abandoned its nuclear arsenal 30 years ago in return for security guarantees" by world powers, but it "has been invaded by Russia," the source said, adding, "Kim must be more convinced that possessing nuclear weapons is the best way" to maintain his family's dynasty.

But some experts say North Korea may not see the need for another nuclear test.

"I do not think Pyongyang will do another nuclear test," said Stephen Nagy, a senior associate professor at International Christian University.

"Most of the hard workings of making a credible nuclear weapon have been proven, and the rest can be done by simulation."

"Deliver vehicles and technologies to evade missile defense systems, on the other hand, can be tested domestically," and Pyongyang is expected to "continue to invest in capabilities to oversaturate U.S. and Japanese anti-ballistic missile systems," Nagy said.

The United States and North Korea remain technically in a state of war as the 1950-1953 Korean War -- in which U.S.-led U.N. forces fought alongside South Korea against the North supported by China and the Soviet Union -- ended in a cease-fire, not a peace treaty.

Biden warns Russia could use chemical weapons in Ukraine