An International Atomic Energy Agency mission to Japan pledged Monday to conduct an objective and science-based safety review on a Japanese plan to discharge treated low-level radioactive water into the sea from the crippled Fukushima Daiichi nuclear plant.

The IAEA task force made the pledge in a meeting with government officials in Tokyo, a day before visiting the plant severely damaged by the 2011 earthquake and tsunami for inspection as the discharge plan has drawn opposition from China and South Korea, as well as local fishing communities.

The task force will conduct the five-day review in Japan in an "objective, credible and science-based manner and help send a message of transparency and confidence to the people in Japan and beyond," said Gustavo Caruso, director and coordinator at the IAEA's Department of Nuclear Safety and Security.

The inspection is aimed at helping ensure the discharge plan proceeds in line with international safety standards and without harming public health or the environment, according to the Vienna-based agency.

Caruso said the Japanese government needs to find the best way to handle the treated water from the standpoint of safety and sustainability, as Tokyo's efforts will be vital for further promoting international understanding on the issue.

Tokyo considers it extremely important to have safety evaluations from the IAEA, Yumoto said. 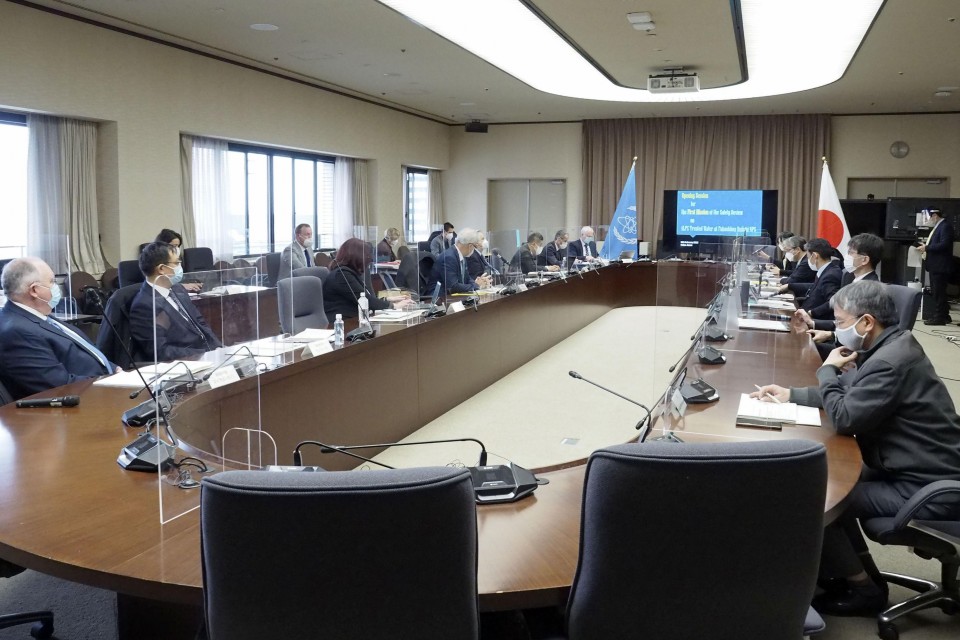 Members of an International Atomic Energy Agency task force meet with officials from the Japanese government and Tokyo Electric Power Company Holdings Inc. in Tokyo on Feb. 14, 2022. (Photo courtesy of the Ministry of Economy, Trade and Industry)(Kyodo)

The task force, established last year, is made up of independent and highly recognized experts with diverse technical backgrounds from various countries including China and South Korea, as well as personnel from IAEA departments and laboratories, according to the agency.

The findings from the mission will be compiled into a report by the end of the year, according to the IAEA.

The review will also be reflected in the deliberation of the discharge plan, submitted from TEPCO, by Japan's Nuclear Regulation Authority, according to Yumoto.

Water that has become contaminated after being pumped in to cool melted reactor fuel at the plant has been accumulating at the complex, also mixing with rainwater and groundwater at the site.

Tokyo decided last April to gradually discharge the water, treated through an advanced liquid processing system that removes radionuclides except tritium, into the Pacific Ocean after dilution starting next year.

Through an undersea tunnel, treated water is to be released into the sea about 1 kilometer off the Fukushima plant from around spring 2023.

IAEA task force members are not expected to work in a national capacity but serve in their individual professional roles and report to Director General Rafael Mariano Grossi.

In response to the Japanese government's request for assistance, Grossi said the IAEA will support Japan before, during and after the release of the water.

The safety review had been initially scheduled for mid-December but was postponed due to the rapid spread of the highly contagious Omicron variant of the coronavirus.