A research group at Future University Hakodate is developing a smartphone app that judges snowboarding tricks like jumps and turns, utilizing artificial intelligence to help amateur board riders improve their moves.

The app also boasts a function that allows boarders to upload videos of tricks and exchange information. As a new tool to broaden the base of snowboarding, the research group is anticipating an increase in demand after next month's Beijing Winter Olympics.

The AI analyzes data collected and sent from a small sensor attached to the snowboard. The sensor detects changes in speed during runs, pressure on the board, speed of turns and so on and then converts it into data to send to the app. 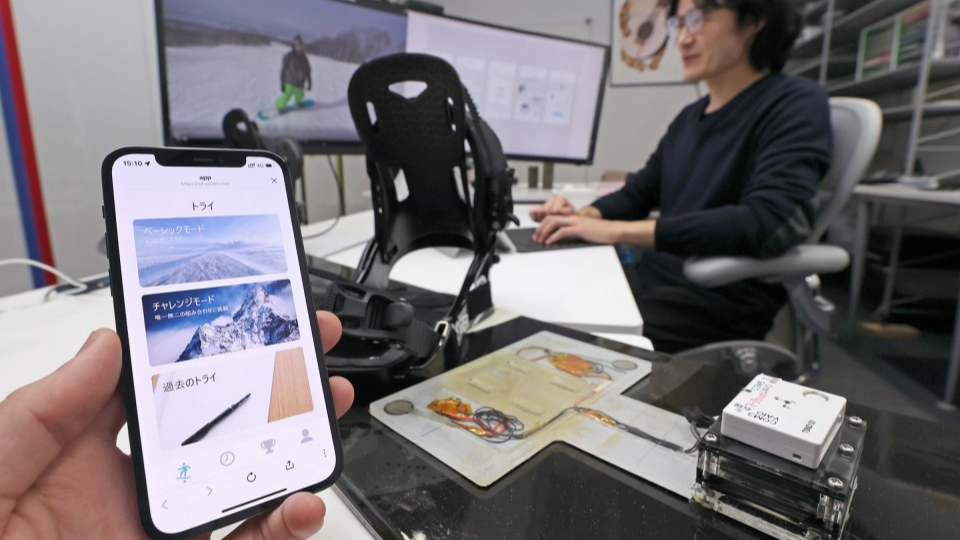 An app that judges snowboarding moves is shown on a smartphone next to a sensor that attaches to  the snowboard.

A model numerical value is entered into the app for each technique and success or failure is judged on whether or not the numerical value of the technique performed is close to the target figure. The user is then sent an audio notification of the result.

The app recognizes five types of snowboarding tricks including the ollie, or the act of loading up the tail of the snowboard to enable a vertical jump, and the backside 360, a full spin in which the rider's back rotates into the direction of travel.

Users can "like" videos uploaded to the app as done on other social networking sites and developers hope that it will lead to the development of new tricks. It is also possible to acquire location information with a GPS tracking system and register the location where a trick has been successfully completed.

According to a "White Paper on Leisure" published by the Japan Productivity Center, the number of people in Japan who snowboard has continued to decline since peaking at 5.4 million in 2002. In 2017, it had decreased by roughly 60 percent to 2.2 million.

Strong performances by Japanese athletes at the Beijing Olympics are expected to draw attention to snowboarding and the research group hopes to promote the sport through the app and is looking for corporate tie-ups to commercialize it.

"Efforts to enhance the appeal of snow sports in Hokkaido are a must," said Yoshinari Takegawa, the associate professor that heads the research group. "We hope the app will bring people together and make snowboarding fun."