A local journalist in Tonga spoke Friday about a chaotic evacuation situation she was in after the devastating eruption of an undersea volcano and subsequent tsunami last weekend that caused severe damage to the small South Pacific nation.

Marian Kupu, a radio journalist in the capital Nuku'alofa, described the harrowing events following Saturday's eruption of the Hunga-Tonga-Hunga-Ha'apai volcano in a phone interview with Kyodo News on Friday, providing one of the first eyewitness accounts in the island country still covered in ash. 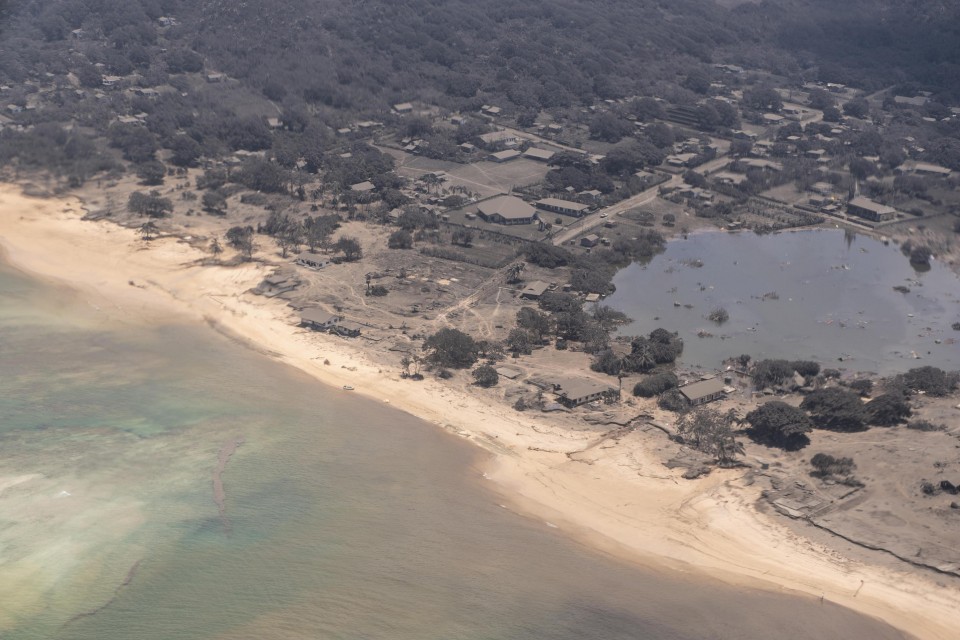 View of Nomuka, Tonga, taken Jan. 17, 2022, by a Royal New Zealand Air Force P-3K2 Orion during a reconnaissance flight to access the damage caused by the eruption of the Hunga-Tonga-Hunga-Ha'apai underwater volcano and the subsequent tsunami. (Photo via New Zealand Defence Force/UPI/Kyodo)

"All of us here in Tonga...we will never forget what happened on that day -- the explosion, the noise, the queuing, the ashes, the loss," Kupu said. "When the first explosion happened, our ears were ringing and we could not hear each other, so we mimicked at each other to evacuate."

When she managed to get in a vehicle and tried to drive away from the Nuku'alofa area, the road was "already packed and people were just queuing" as residents fled their homes and raced inland, she said.

Kupu began to hear little thumps on her car windshield as she drove away from the shoreline and found out the noise was made by a rainfall of little rocks.

"Then all of a sudden we just saw black dust everywhere," which was a blanket of volcanic ash that covered the nation "from head to toe," Kupu said. "It was harder for us to drive because we couldn't see where we were going, not only that we were queuing but we couldn't see."

The volcanic eruption generated tsunami of up to 15 meters and sent waves across the Pacific, killing at least three people and causing extensive damage to buildings and infrastructure in Tonga. In the capital Nuku'alofa, some 60 kilometers south of the volcano, a 1.2-meter tsunami was observed.

Kupu said people in Tonga are still busy cleaning up the dust.

"Some of us are able to clean the dust from our home, from our clothes, from our vehicle...then when the wind comes, it just blows all the dust from trees and everything else on the ground, and then we just have to keep cleaning up because there's just dust everywhere," she said.

Tonga's population of around 105,000 has largely been cut off from the world since the disaster, with the archipelago's sole undersea communications cable severed by the volcanic eruption.

Some 2G connectivity was restored to Tonga on Thursday, but communications remain limited with demand exceeding capacity, the New Zealand government said.

Power supplies have been restored in the capital and elsewhere, but they remain fragile. "Electricity is back, but it's on and off," Kupu was quoted by Australian Broadcasting Corp. as saying. "Some outages last for hours, some last for days."

Drinking water is now the main concern for Tonga, after ash contaminated most of the islands' supplies.

The delivery of international aid began Thursday from Australia and New Zealand, and the arrival of a second navy ship dispatched by Wellington on Friday brought much-needed relief -- 250,000 liters of water and a desalination plant that can produce 70,000 liters per day.

A second flight from Australia carrying relief supplies was also scheduled to arrive in Tonga on Friday.

According to the United Nations, about 84,000 people in the archipelago have been impacted by the disaster, or more than 80 percent of the population.