Japan's Ikuma Horishima and Anri Kawamura won the men's and women's events, respectively, in the penultimate round of the FIS Freestyle Ski Moguls World Cup on Friday.

In the final World Cup event ahead of next month's Beijing Olympics, 24-year-old Horishima claimed his 11th career win while 17-year-old Kawamura notched her third victory of the season. 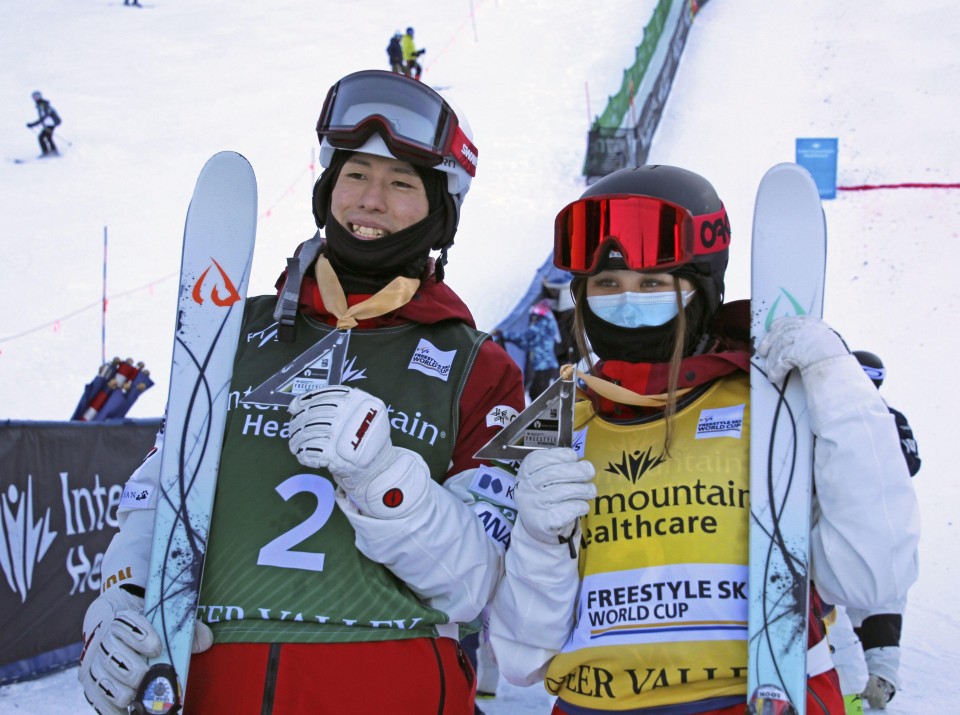 Japan's Ikuma Horishima (L) and Anri Kawamura pose for a photo after winning the men's and women's events, respectively, in the penultimate round of the FIS Freestyle Ski Moguls World Cup on Jan. 14, 2022, in Deer Valley, Utah. (Kyodo)

Horishima scored 84.04 points to edge Mikael Kingsbury's 82.84, bettering the Canadian in both time and air scores. Horishima, who ended his rival's winning streak at four, has claimed podium finishes in all nine events this season.

"I'll try to maintain my form heading into the Olympics," said Horishima, who was joined on the podium by third-place Walter Wallberg of Sweden on 79.62.

Horishima is second in the overall rankings this season on 560 points, behind Kingsbury's 572.

Kawamura logged 80.89 with her run, ahead of Austrian Jakara Anthony's 80.38 in second and French Pyeongchang Games gold medalist Perrine Laffont's 80.02 in third.

"It feels great. I'm proud to have won right before the Olympics," said Kawamura, who leads the overall standings on 549 points ahead of Laffont on 510.