North Korea on Thursday hinted at resuming nuclear and intercontinental ballistic missile tests, saying it may restart "activities" that it had temporarily suspended to build trust with former U.S. President Donald Trump.

North Korean leader Kim Jong Un, who held talks with Trump three times, presided over the meeting of the Political Bureau of the Central Committee of the Workers' Party of Korea, according to KCNA. 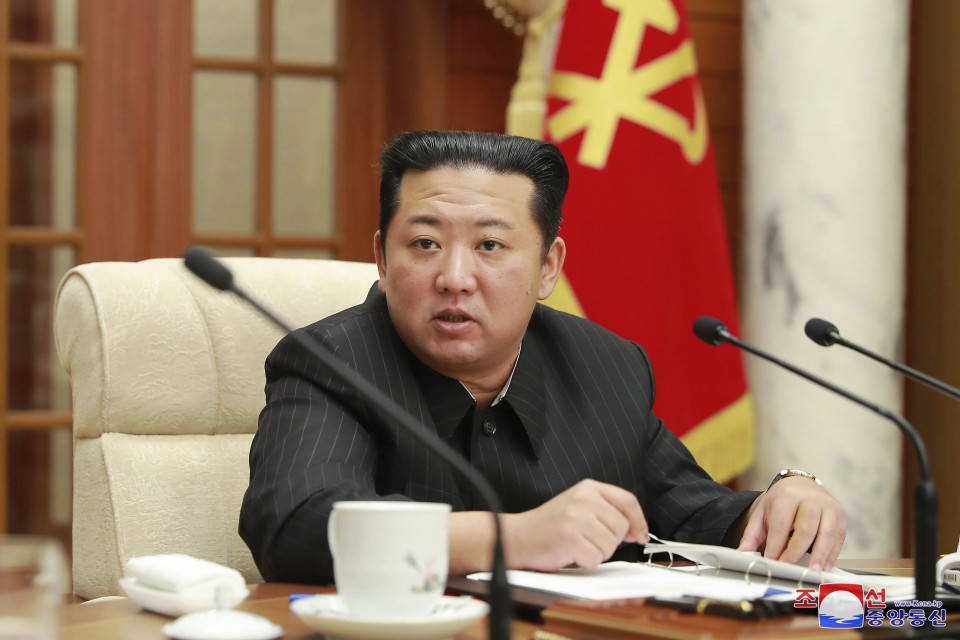 North Korean leader Kim Jong Un attends a meeting held by the Political Bureau of the Central Committee of the ruling Workers' Party of Korea in Pyongyang on Jan. 19, 2022. (KCNA/Kyodo)

Later Thursday, a South Korean Foreign Ministry official said at a press conference that it has been "closely watching" the movements of the North, adding the situation surrounding the Korean Peninsula has become more severe.

A South Korean military official was also quoted by Yonhap News Agency as saying the North seems to be preparing for a military parade.

China, North Korea's most influential ally in economic and security terms, said pressure will not help solve issues related to the divided peninsula, calling on the United States to work to advance the process of political settlement.

At the first-ever U.S.-North Korea summit in June 2018 in Singapore, Washington promised to provide security guarantees to Pyongyang in return for "complete" denuclearization of the country. Since then, North Korea has refrained from nuclear and ICBM tests.

Pyongyang, however, has argued that Washington has not implemented the agreement despite North Korea taking what it says are concrete measures to discard its nuclear arsenal.

In November 2017, North Korea launched what it said was its "most powerful" ICBM, capable of delivering a nuclear warhead anywhere in the continental United States. Kim Jong Un then declared the completion of "the state nuclear force."

Pyongyang's last nuclear test, its sixth, took place in September 2017. Trump urged the North Korean leader to scrap all of the nation's nuclear facilities, including undeclared ones, but it is uncertain whether Pyongyang has dismantled them.

Direct talks between the United States and North Korea have been at a standstill for more than two years, with the administration of President Joe Biden unlikely to make concessions over denuclearization and sanctions relief.

North Korea has expressed unwillingness to hold bilateral negotiations with the United States unless Washington withdraws what Pyongyang considers to be its hostile stance. The two countries have no diplomatic relations.

The United States and North Korea remain technically in a state of war as the 1950-1953 Korean War -- in which U.S.-led U.N. forces fought alongside the South against the North backed by China and the Soviet Union -- ended in a cease-fire, not a peace treaty.

Earlier this month, North Korea lambasted the United States for expanding sanctions following Pyongyang's missile tests, saying that beefing up its national defense capabilities is the legitimate right of a sovereign state.

North Korea's economy, meanwhile, has been languishing further in the aftermath of the global outbreak of the novel coronavirus, with Kim Jong Un acknowledging that the nuclear-armed nation has faced a serious food crisis.

With North Korea taking strict anti-epidemic steps such as closing its borders, its trade with China plummeted around 90 percent in 2021 from 2019 before the COVID-19 pandemic began.

North Korea claims no domestic infection cases have been found, but it cut off land traffic to and from China until earlier this month with fears growing that the virus, first detected in the central Chinese city of Wuhan in late 2019, could enter the country.

In addition to a plunge in trade with China, devastation of the nation's farm sector caused by powerful typhoons and flooding has also sparked concern that North Korean citizens may not be receiving adequate food and other daily necessities.

North Korea's latest provocative remarks against the United States might have been aimed at bringing the Biden administration to the negotiating table to discuss sanctions relief by intensifying security tensions in the region, some pundits say.

Other observers say North Korea has been trying to steadily develop new weapons based on the decisions made at the first congress of the ruling party in five years in January 2021.

Kim has pledged to develop ICBMs with the use of solid fuel, which can shorten the time required for prelaunch preparations.