Princess Aiko, the only child of Emperor Naruhito and Empress Masako, has vowed on the occasion of her 20th birthday Wednesday to assist her parents as much as possible in their official duties now that she has come of age.

"I would like to refine myself and move forward step by step so that I can grow into an adult who can be of service to others," the princess said in a statement released by the Imperial Household Agency.

Official ceremonies to mark the princess's coming of age have been pushed back to the weekend to avoid disrupting her classes at Gakushuin University in Tokyo, where she is currently studying Japanese literature. 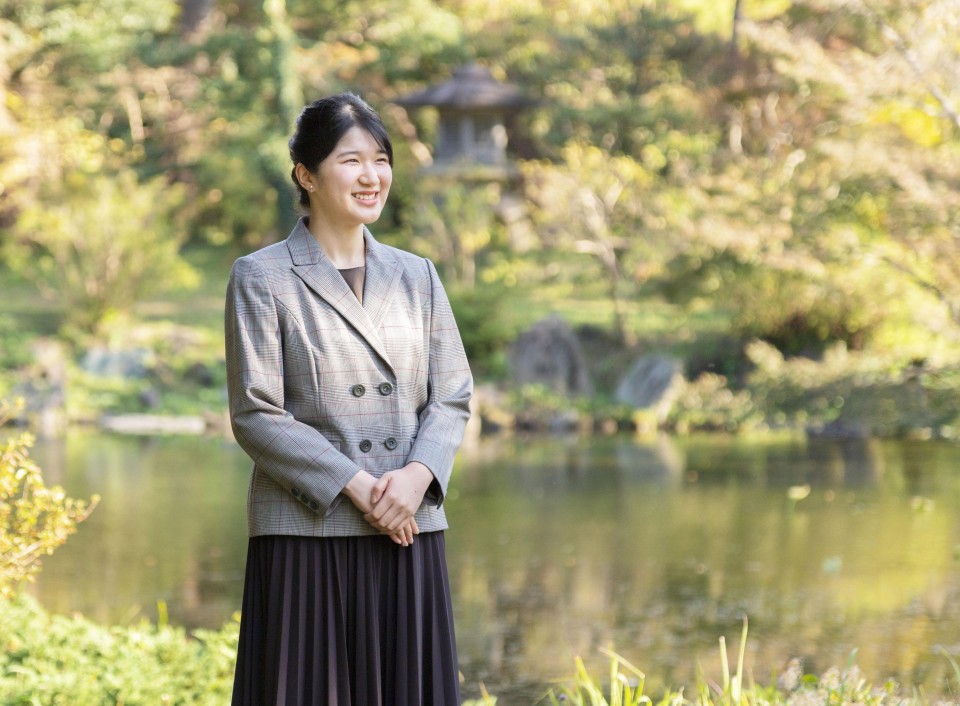 Princess Aiko is pictured at the Imperial Palace in Tokyo on Nov. 14, 2021. (Photo courtesy of Imperial Household Agency)(Kyodo)

A customary coming-of-age press conference has also been postponed to mid-March, when the university is on spring break.

On Sunday, the princess will visit sanctuaries that enshrine the imperial family's ancestors and Japanese gods to offer prayers, and be awarded the Grand Cordon of the Order of the Precious Crown by her father at the Imperial Palace.

Dressed in formal wear with a tiara, the princess will also greet her parents and her grandparents -- former Emperor Akihito and former Empress Michiko.

Thanking the emperor and empress for their "loving and careful upbringing," the princess also expressed gratitude to "all the people who have been involved in my journey up to this day."

She will celebrate her birthday Wednesday by having a meal with her parents after receiving well-wishes from aides at the palace.

Princess Aiko, who is not eligible to ascend the Chrysanthemum Throne as the 1947 Imperial House Law limits heirs to males, is scheduled to appear to the public for the first time as an adult member of the imperial family on New Year's Day to greet well-wishers gathered at the Imperial Palace in central Tokyo.

"It is heartbreaking to hear that many people have died due to the novel coronavirus," the princess said in the statement, adding that she hopes "a peaceful and vibrant life" would soon come to all.

Princess Aiko enrolled in Gakushuin University in 2020, where she has been attending online classes amid the coronavirus pandemic.

She has also been taking language courses in English and Spanish, as well as Japanese history and traditional arts classes, and said she sometimes exchanges opinions with her parents when working on assignments.

In September, she moved from the Akasaka Imperial Residence, where she had lived for almost all her life, to the Imperial Palace with her parents, who explained her duties as an adult member of the imperial family.

She is said to be as diligent as ever in taking care of her dog "Yuri" and cats "Mii" and "Seven," which she brought along with her from the Akasaka residence.

Reflecting her love for animals and literature, she focused on cats and dogs depicted in literary works in the Heian Period (794-1185) in a report she wrote before graduating from high school.

With the princess's coming of age, the only member of the imperial family that remains underage is Prince Hisahito, the 15-year-old son of Crown Prince Fumihito, the emperor's brother. The young prince is second in line to the Japanese imperial throne.