Former Japanese Prime Minister Shinzo Abe said Wednesday that any contingency concerning Taiwan would be also an emergency for Japan and for the Japan-U.S. security alliance, stressing the need to keep urging the Chinese leadership not to misunderstand it.

The former leader made the remarks during a virtual appearance at a Taiwan think-tank event at a time when China has piled diplomatic and military pressure on the democratically ruled island it considers as its own.

Abe, who stepped down as prime minister in 2020 after nearly eight years in the post, also voiced support for Taipei's bid for membership of the Trans-Pacific Partnership free trade agreement, which Beijing is seeking to join. Japan and 10 other countries make up the economic framework, though the United States has withdrawn from it. 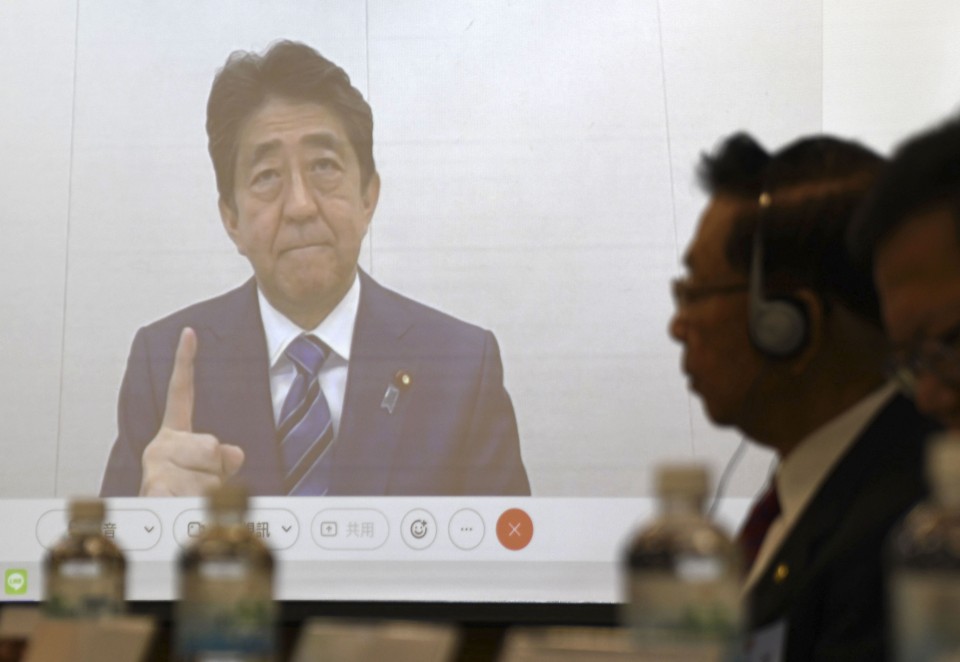 Later Wednesday, mainland China criticized Abe and said he was talking nonsense, adding it has lodged a protest with the Japanese government through a diplomatic channel.

"No one should underestimate the strong decisiveness of the Chinese people to defend national sovereignty and territorial integrity," Foreign Ministry spokesman Wang Wenbin told reporters in Beijing.

Many Taiwanese are hoping Abe will visit the island soon, as he is regarded as having been the most Taiwan-friendly Japanese prime minister in recent memory.

There is also concern within the island that Japan and China may draw closer together as the two countries mark the 50th anniversary of normalized relations next year.

In his remarks, Abe expressed concern about the rapid military buildup in China, saying the world would witness the "most crisis-filled period" in history by 2049 with an eightfold increase in China's economy and military spending.

Forging stronger ties between Taiwan, Japan and the United States "will be extremely important for the peace and stability of the region," Abe said.

On Taiwan's bid to join the 11-nation framework formally known as the Comprehensive and Progressive Agreement for Trans-Pacific Partnership, Abe said the island has qualifications to be a member. He also indicated he will aid Taiwan's bid to be included in the World Health Organization.

The former president of the ruling Liberal Democratic Party had little to say about a potential security dialogue between Japan and Taiwan, only saying a similar arrangement between the ruling parties on both sides could "have an impact on the government."