The Women's Tennis Association said Wednesday it will suspend all tournaments in China, including Hong Kong, upping the ante in its row with Beijing over a sexual assault allegation made by Chinese tennis professional Peng Shuai against a former Chinese vice premier.

The move by the major tennis organization could deal a blow to the 2022 Beijing Winter Olympics, which the Communist-led Chinese government under President Xi Jinping has been keen to use as a way to enhance national prestige, foreign affairs experts said. 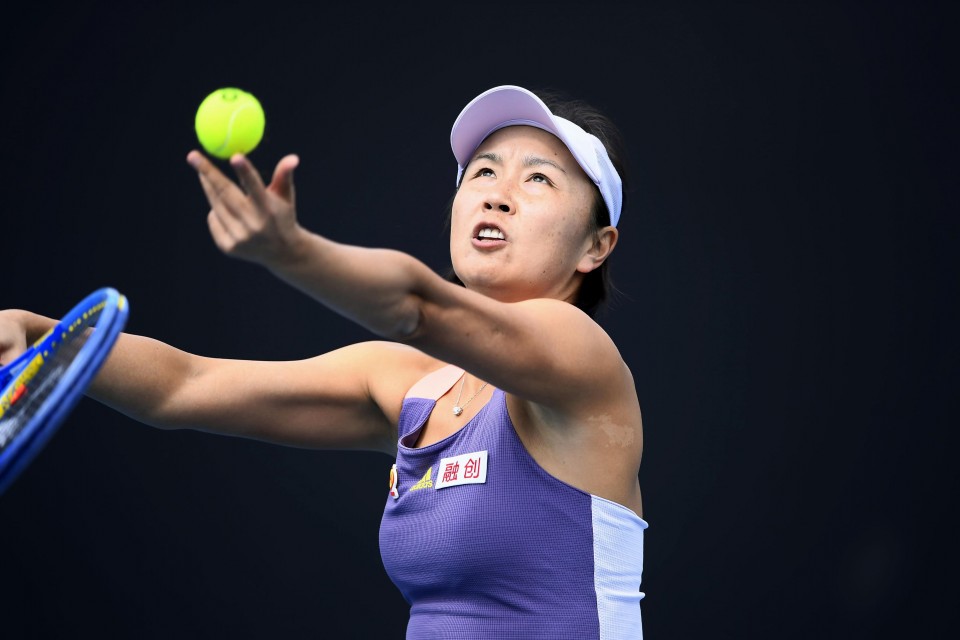 Photo taken Jan. 21, 2020, shows Chinese tennis player Peng Shuai playing in the first round of the women's singles at the Australian Open in Melbourne. (Kyodo) ==Kyodo

WTA Chairman and CEO Steve Simon said in a statement that the Chinese leadership "left the WTA with no choice," after failing to address "this very serious issue in any credible way," in reference to the allegation Peng posted on social media early last month.

"If powerful people can suppress the voices of women and sweep allegations of sexual assault under the rug, then the basis on which the WTA was founded -- equality for women -- would suffer an immense setback," the statement read.

Naomi Osaka, Serena Williams and Novak Djokovic are among the high-profile players in the sport who have been vocal about their concerns for Peng, a 35-year-old two-time Grand Slam doubles champion and three-time Olympian.

Chinese Foreign Ministry spokesman Wang Wenbin told reporters in Beijing on Thursday, "We have always firmly opposed the politicization of sports," without elaborating whether Beijing has any intention to have talks with the WTA.

On the Beijing Olympics, meanwhile, U.S. President Joe Biden acknowledged last month that he is considering a diplomatic boycott of the global sporting event slated for February, suggesting that no U.S. government representatives would attend it.

The boycott, which would not affect the participation of U.S. athletes, is seen as a response to China's alleged human rights violations against Uyghur Muslims in its far-western Xinjiang region that Washington has labeled as "genocide."

Should the United States call for a diplomatic boycott, other democratic countries skeptical about Peng's safety are likely to follow suit, probably thwarting China's efforts to host the Beijing Winter Olympics in a complete form, pundits said.

On Nov. 2, Peng wrote on Weibo, China's equivalent to Twitter, that she had been forced by the now-retired Vice Premier Zhang Gaoli of the Chinese Communist Party into having sex during a certain period of their relationship. The post was quickly deleted online.

Peng has not been seen in public for weeks, and the WTA revealed it had failed to reach the player after "repeatedly" trying to contact her. The WTA also raised questions about a statement purported to be from Peng that was released by a Chinese state-affiliated broadcaster.

The WTA had previously threatened to cancel tournaments in China due to dissatisfaction with the handling of Peng's situation by officials. On Wednesday, Simon and the organization made a bold decision, saying, "The players of the WTA, not to mention women around the world, deserve nothing less."

Simon expressed "serious doubts" that Peng is free and not subject to censorship, coercion and intimidation, despite the International Olympic Committee, which is preparing for the Beijing Olympics, indicating it believes Peng is "safe and well" after she had a video call with its president, Thomas Bach, on Nov. 21.

On Thursday, the IOC released a statement, saying it held another video call with her on Monday. While the WTA has taken a stand on the basis of Peng's sexual assault accusation, the IOC has been mute on that topic. The statement reiterated the IOC's concern over her well-being and safety and said the body would pursue "quiet diplomacy."

"In good conscience, I don't see how I can ask our athletes to compete there when Peng Shuai is not allowed to communicate freely and has seemingly been pressured to contradict her allegation of sexual assault," Simon said.

"Given the current state of affairs, I am also greatly concerned about the risks that all of our players and staff could face if we were to hold events in China in 2022," he said.

The WTA has yet to release the 2022 event calendar. In the 2019 season, China hosted nine tournaments, such as the season-ending WTA Finals. All tournaments in China were either relocated or canceled in 2021 against a backdrop of the COVID-19 pandemic.