Dozens of world leaders rallied behind U.S. calls to uphold democracy and human rights as President Joe Biden on Thursday hosted a virtual summit to counter challenges posed by authoritarianism seen in countries such as China.

The "Summit for Democracy," which brings together some 100 countries and regions for two days through Friday, has added to tensions between the United States and China, with Beijing criticizing it as a divisive event that labels half of the world's countries as nondemocracies based on a U.S. yardstick. 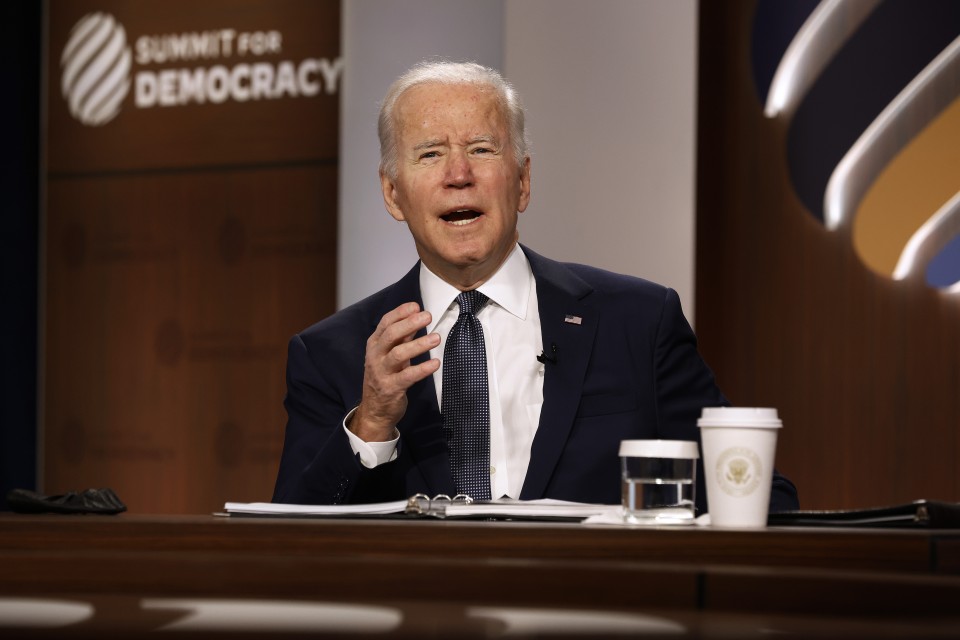 Taiwan, a self-ruled democratic island that Beijing claims as its own territory, was among the invitees while China and Russia were not. Among U.S. allies and partners in Asia, countries such as Japan, South Korea and the Philippines are taking part, but Thailand and Singapore are not.

Warning that autocrats seek to expand their influence around the world and justify their repressive policies as more efficient than democratic governance in addressing today's challenges, Biden said the world is now standing at an "inflection point" in history.

"Will we allow the backward slide of rights and democracy to continue unchecked? Or will we together have a vision...and courage to once more lead the march of human progress and human freedom forward?" he said at the outset of the meeting.

During the summit, the Biden administration vowed to provide up to $424.4 million for a "democratic renewal" that will include efforts to support independent media, defend free and fair elections globally and work with other countries toward using export controls to ensure technologies do not enable human rights abuses.

A senior administration official said the United States and a group of like-minded countries are expected to work on the exports control initiative by first devising a "nonbinding code of conduct" on how to better control their licenses to avoid the malign use of technologies and then seek to bring in more countries.

The administration also said the State Department will set aside $4 million to establish a multilateral fund to counter "authoritarian censorship" of the internet and invite like-minded partners to contribute jointly.

Representing Japan, a key U.S. ally that has become more vocal about concerns over China's assertiveness in the region, Prime Minister Fumio Kishida called for working collectively against moves to undermine freedom, democracy and rule of law and vowed to speak out against serious human rights violations.

Kishida also pledged to provide $14 million to international organizations to ramp up efforts to protect human rights in the corporate sector, according to the Japanese government.

The summit, also joined by leaders from the civil society and private sector, is the first of what would be a two-step process, with Biden planning to host another "Summit for Democracy" in an in-person format about a year later so the participating countries can report on the progress made toward their commitments.

Biden took office in January with a pledge to restore the U.S. role as a champion of democracy and human rights, following what critics viewed as a retreat of U.S. global leadership under his predecessor Donald Trump. Holding a summit focused on democracy during his first year in office was one of Biden's campaign promises.

While U.S. officials insisted that the summit is not about "any one specific country," China has been stepping up its attack against the U.S. campaign to rally democracies by citing its poor handling of the coronavirus pandemic and entrenched racism as signs of flaws in the American political system and society.

A deadly attack on the U.S. Capitol in January this year by a mob seeking to overturn the outcome of the U.S. presidential election also exposed the vulnerability of democracy in the country.

The Biden administration has also faced questions over the reasoning behind the selection of some invitees, among them the Philippines, which has faced criticism over human rights abuses such as extrajudicial killings carried out in its war on drugs.

Including Taiwan in the list of participants, meanwhile, was seen as another sign of U.S. support for the island, which is under military pressure from an increasingly assertive China.

Lithuania, which has been facing diplomatic pressure from China for deepening ties with Taipei, also took part in the event.

Hungary -- a North Atlantic Treaty Organization member that is exhibiting democratic backsliding as Prime Minister Viktor Orban strengthens his grip on the country -- was not invited. Turkey, also a NATO ally but deemed an autocracy under President Recep Tayyip Erdogan, was also left out.

Organizations that promote democracy and human rights around the world have been sounding alarms in recent years over declining freedoms.

According to a 2021 report by the International Institute for Democracy and Electoral Assistance, an intergovernmental organization, 70 percent of the world's population lives either under an outright nondemocratic regime or in a democratically backsliding country, compared to only 46 percent 10 years ago.

U.S. invites Taiwan to virtual "Summit for Democracy" in Dec.