Tokyo stocks plummeted Friday, with the Nikkei index ending at a one-month low, as concerns were raised following reports of a new COVID-19 variant in South Africa and its potential impact on the global economic recovery. 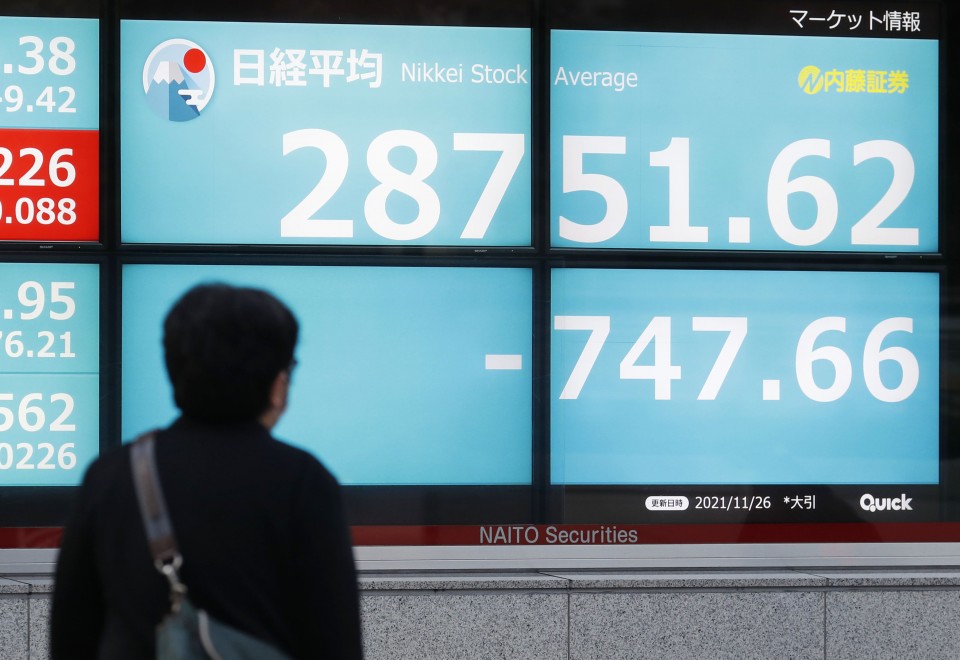 A financial board in Tokyo shows Nikkei Stock Average closing down about 750 points, or 2.5 percent, at a one-month low on Nov. 26, 2021, following reports of a new COVID-19 variant in South Africa. (Kyodo). (Kyodo)

The U.S. dollar fell to the upper 114 yen range as the yen, seen as a safe-haven asset, was sought on worries over the new COVID-19 strain discovered in South Africa, dealers said.

Stocks were lower from the outset, extending losses throughout the morning. Selling accelerated in the afternoon, with the Nikkei benchmark tumbling nearly 900 points, or over 3 percent, to fall below the 29,000 mark amid the yen's advance and drop in some Asian markets.

"Reports of the new COVID-19 variant were a risk factor to the market as they heightened a sense of uncertainty and raised worries of a potential resurgence of infections," said Masahiro Ichikawa, chief market strategist at Sumitomo Mitsui DS Asset Management Co.

He added a slump in U.S. stock futures also weighed on the market.

It is feared the variant confirmed in South Africa may be highly contagious and the efficacy of COVID-19 vaccines against the strain is being questioned due to the nature of its mutations.

On Thursday, Britain said it would put six African countries, including South Africa, on its red list of travel restrictions as a countermeasure against the new variant's potential spread.

Maki Sawada, a strategist at Nomura Securities Co.'s investment content department, said that "as European countries implement lockdowns and restrict movements due to a surge in infections in the region, reports of a new variant served as an additional negative factor and deepened uncertainty over the global economic recovery."

On the First Section, declining issues outnumbered advancers 1,992 to 152, while 39 ended unchanged.

Air and land transportation issues were particularly hit on worries that the South African variant may reduce people's ability to travel.