Japanese Prime Minister Fumio Kishida expressed strong concern over human rights issues in China during his remarks to a virtual meeting of leaders from about 50 Asian and European countries on Friday.

On the last day of the two-day summit of the Asia-Europe Meeting, Kishida voiced worries about the human rights situation in Hong Kong as well as the Xinjiang region in northwestern China.

Leaders of European countries on Thursday, the first day of the summit, also expressed concern about friction between China and other nations over human rights and other issues. 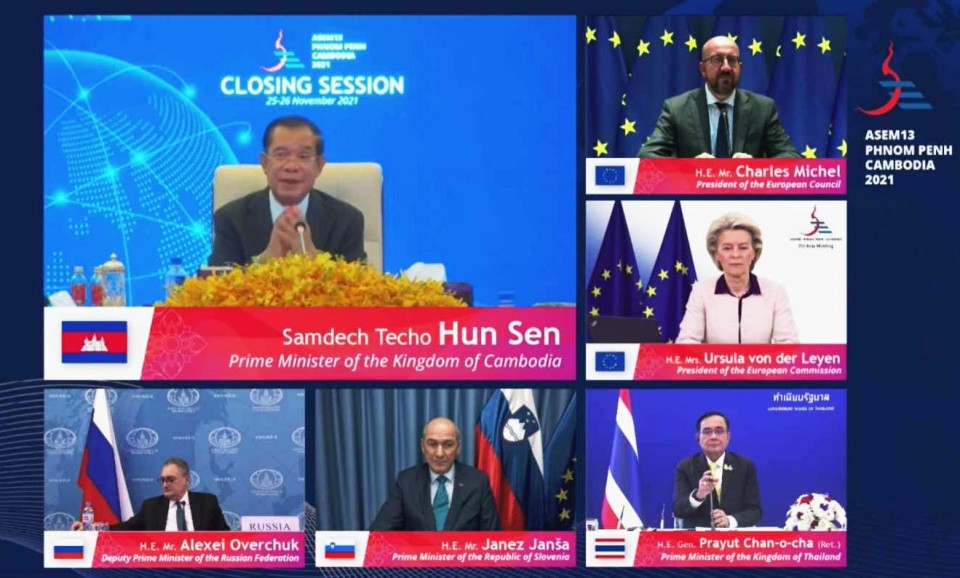 At the closing of the meeting on Friday, Cambodian Prime Minister Hun Sen, who hosted the summit, said, "Over the past 25 years, ASEM has proven to be a vital platform, connecting Asia and Europe and promoting the partnership between the two continents."

They also expressed deep concerns over Myanmar, where the military seized power after toppling a civilian government led by Aung San Suu Kyi in February.

The ASEM leaders urged the ruling junta to accept a special envoy of the Association of Southeast Asian Nations, who is supposed to mediate between the stakeholders in the country.

Myanmar did not participate in the summit, after being told that only a "nonpolitical representative" could attend, according to ASEAN sources.

Meanwhile, the leaders did not specifically refer to territorial disputes in the South China Sea, only mentioning the importance of a peaceful solution to conflicts in general based on international law and freedom of navigation.

ASEM involves about 50 countries from across Europe and Asia as well as the European Union and the ASEAN secretariat.