Leaders from about 50 Asian and European countries started a two-day virtual summit meeting on Thursday with Cambodia playing host, as China looms large over issues ranging from trade to human rights and to Taiwan.

Speaking at the opening session, Cambodian Prime Minister Hun Sen called the summit of the Asia-Europe Meeting, or ASEM, a "timely opportunity" for the leaders of the two continents "to reaffirm the importance of the Asia-Europe partnership and cooperation in addressing regional and global issues of common concerns."

European Commission President Ursula von der Leyen said in her remarks that the European Union "will always stand up" for the rules-based international system, calling ASEM a "key building block" in it.

"At the same time, we seek cooperation beyond the geopolitical divides. This is the baseline for our engagement in the Indo-Pacific," the commission president added. 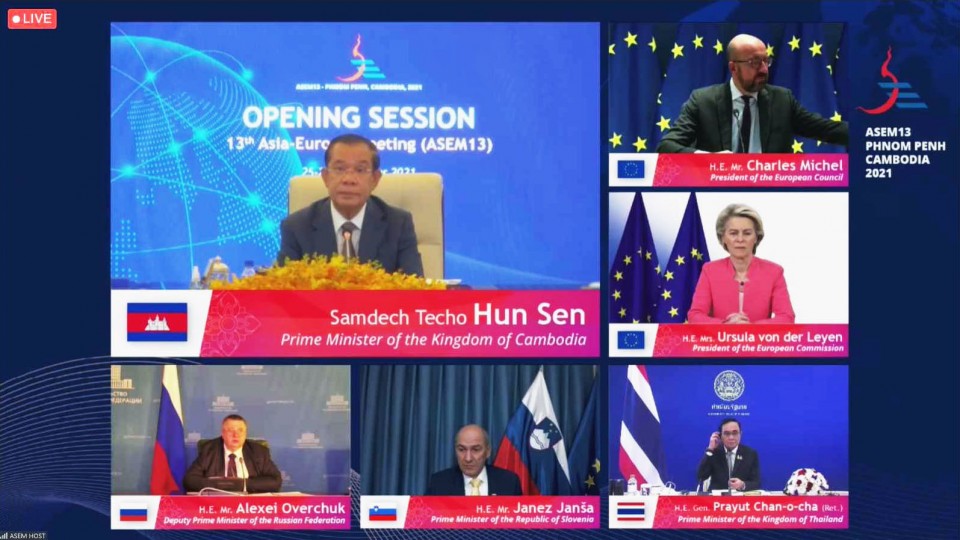 Screenshot shows the online Asia-Europe Meeting, or ASEM, on Nov. 25, 2021. Leaders from about 50 Asian and European countries started the two-day virtual summit the same day. (Kyodo)

Comments from European leaders are being closely watched as European countries are quickly hardening their stance on Beijing over issues including human rights.

At the summit, Chinese Premier Li Keqiang called for multilateralism to be firmly maintained, saying that would be the right choice in pursuit of world peace, according to Chinese state media.

In a video message, Prime Minister Fumio Kishida reiterated Japan's plan to continue providing a total of 60 million doses of coronavirus vaccine to other countries, besides its financial contribution to the U.N.-backed COVAX Facility program providing shots to poor countries.

Among the issues expected to be discussed are the pandemic response and Myanmar, where the military has seized power after toppling a civilian government led by Aung San Suu Kyi in February.

The country's military government informed host Cambodia that it would not participate in the summit, after being told that only a "nonpolitical representative" could attend, according to ASEAN sources.

The leaders are expected to adopt documents, including a chairman's statement, on Friday.

ASEM involves about 50 countries from across Europe and Asia as well as the European Union and the secretariat of the Association of Southeast Asian Nations.

An ASEM summit was supposed to be held in Cambodia in November last year, but was postponed to this year and held in videoconference format due to the coronavirus pandemic.