Leaders of the Group of 20 economies on Sunday highlighted the importance of achieving global net zero greenhouse gas emissions "by or around mid-century," in what was seen as a vague commitment as many of them head to crucial U.N. climate talks.

They vowed to end public financing for new coal power generation in other countries by the end of 2021, but set no target for phasing out the dirtiest fossil fuel domestically in a declaration issued after their two-day meeting in Rome.

Gathering for the first in-person G-20 summit in two years, the leaders also pledged to help advance a global goal of inoculating 70 percent of the planet's population against COVID-19 by mid-2022, amid concerns that uneven access to vaccines could hamper the world economic recovery.

Climate change was high on the agenda during the meeting in Italy, seen as a precursor to the U.N. climate conference that just started in Glasgow, Scotland. 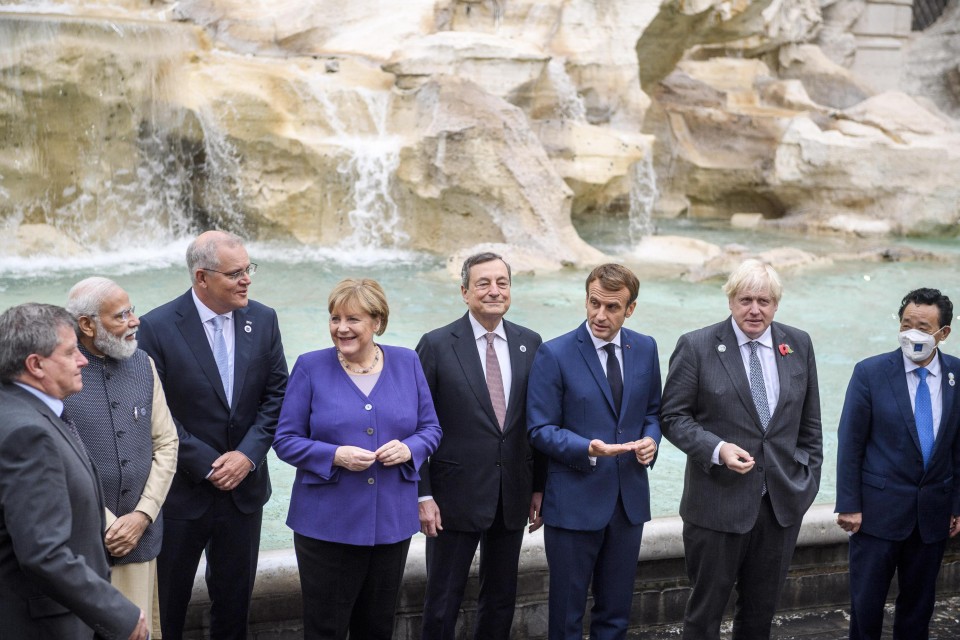 Participants of the Group of 20 summit visit the Trevi Fountain in Rome on Oct. 31, 2021, the second day of their two-day meeting. (Getty/Kyodo)

Chinese President Xi Jinping only joined the G-20 summit via video link and is also not expected to attend the U.N. conference in-person, dimming hopes that the world's largest carbon dioxide emitter will come up with any fresh commitments.

"We will accelerate our actions...acknowledging the key relevance of achieving global net zero greenhouse gas emissions or carbon neutrality by or around mid-century," the G-20 economies, which account for more than 80 percent of world gross domestic product and around 80 percent of emissions, said in the declaration.

They also called for "meaningful and effective actions and commitment by all countries" to keep global warming at 1.5 C above pre-industrial levels.

Italian Prime Minister Mario Draghi, who chaired the summit, hailed the outcome a "success," saying it is the first time that all G-20 countries recognized the need to aim for limiting temperature rise to 1.5 C, a tougher target mentioned in the Paris climate accord.

The 2015 Paris Agreement sets out a global framework to avoid the most dangerous impacts of climate change by limiting global warming to "well below" 2 C, preferably to 1.5 C, compared with levels before the Industrial Revolution.

To prevent the 1.5 C line being crossed, U.N. scientists estimate that CO2 emissions will need to fall by about 45 percent from 2010 levels by 2030, reaching net zero around 2050. But the G-20 declaration did not mention a specific year to achieve carbon neutrality.

Many countries around the world are already seeking to move toward net zero emissions by 2050, including the United States, Japan and the European Union, which are part of the G-20. But other members such as China, Russia and Saudi Arabia are looking to 2060.

"I leave Rome with my hopes unfulfilled -- but at least they are not buried," he tweeted. "Onwards to #COP26 in Glasgow to keep the goal of 1.5 degrees alive."

Global temperatures have already increased about 1 C, and countries have been urged to commit to more ambitious actions ahead of the 26th U.N. Climate Change Conference of the Parties, known as COP26.

On the current state of the global economy, the G-20 leaders affirmed that recovery from the pandemic-induced sharp downturn continued at a "solid pace," underpinned by the rollout of COVID-19 vaccines and policy support.

Price pressures in the United States and elsewhere are currently seen as transitory, with bottlenecks occurring as some parts of the economy recover from the pandemic faster than others, resulting in imbalances between supply and demand. But concerns linger over whether this could lead to a more sustained rise in inflation.

The G-20 leaders said they will remain "vigilant" over the global economic challenges, such as disruptions in supply chains, and vowed to work together to address the issues.

On the sidelines of the summit, U.S. President Joe Biden hosted a meeting with more than a dozen countries, including Japan, to foster greater cooperation to tackle supply chain disruptions and building long-term resilience to the system.

The G-20 leaders, meanwhile, also rallied behind a deal to introduce in 2023 a 15 percent global minimum corporate tax rate and a system to require multinational companies to pay their "fair share" in levies wherever they operate and generate profits.

The move was widely expected as the G-20 finance chiefs in mid-October endorsed the tax reform plan, which was worked out through international negotiations at the Organization for Economic Cooperation and Development.

Other virtual G-20 summit participants included Japanese Prime Minister Fumio Kishida, who took office less than a month ago and was preparing for a general election on Sunday, and Russian President Vladimir Putin.