Japan's new Prime Minister Fumio Kishida is expected to stick to the "Abenomics" economic policy line in principle but with an additional focus on boosting middle class incomes to put the pandemic-stricken domestic economy back on a steady growth path.

After Kishida's election as prime minister by parliament on Monday, economists expect him to push ahead with the three elements of ultraloose monetary policy, fiscal stimulus and structural reforms launched under the government of Shinzo Abe in late 2012. 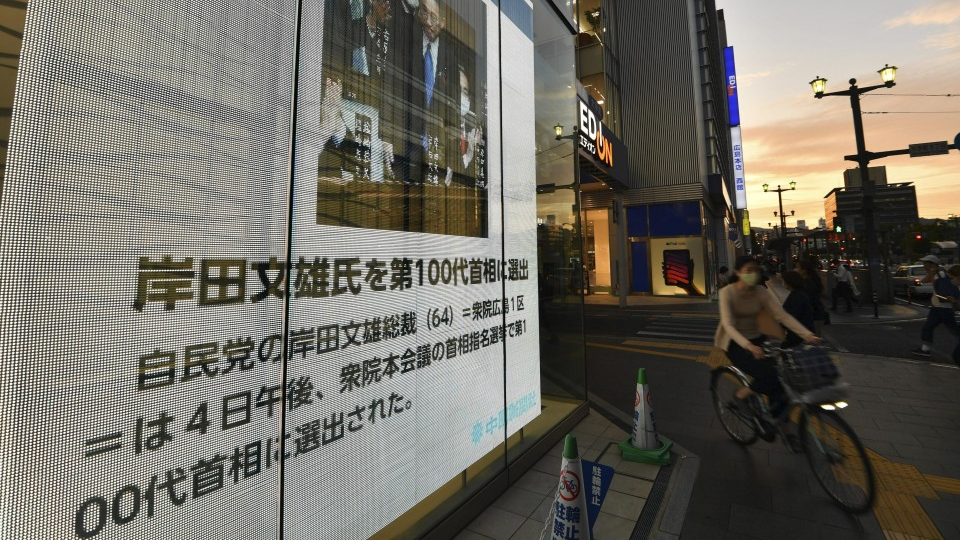 A large screen in Hiroshima, the constituency of Liberal Democratic Party President Fumio Kishida in western Japan, shows on Oct. 4, 2021, a news report about his election as Japan's new prime minister in parliament earlier in the day. (Kyodo) ==Kyodo

Akira Amari, an adviser to Kishida's campaign for the presidential election of the ruling Liberal Democratic Party who has been appointed to the party's No. 2 post of secretary general, is one of three LDP heavyweights, including Abe and previous Finance Minister Taro Aso, who propelled Abenomics.

"Mr. Kishida was strongly supported during the leadership election by those who promoted Abenomics and he will apparently follow the same course," said Hideo Kumano, executive chief economist at Dai-ichi Life Research Institute. But "at the same time, it looks like he has an intention to revise some part" of the policy mix, Kumano added.

Kishida pledged during the party leadership election campaign to maintain the "three pillars of aggressive monetary easing, flexible fiscal spending and a growth strategy," in an apparent nod to Abenomics.

The policies helped to turn the yen sharply weaker, rejuvenating Japanese exporters and pushing Tokyo stocks substantially higher. But while the economic model boosted large companies and people on high incomes, benefits have yet to trickle down.

The new prime minister has vowed to create a "new Japanese-style capitalism" to narrow income disparities through the redistribution of wealth and to move on from the "neoliberal policies" adopted by Junichiro Koizumi, who led the nation from 2001 to 2006, under which divisions between the rich and poor widened, according to Kishida.

Dai-ichi Life's Kumano said the comments reflected "a tinge of criticism" that Abenomics had failed to create a virtuous cycle of growth and wealth distribution, and Kishida's desire to add what is lacking.

The new prime minister has said he will consider more generous tax incentives to encourage companies to raise wages for the middle class. He will also look into financial aid for families on low incomes in addition to housing and education support.

Kishida has also said he will review the taxation of income from financial and securities transactions, as the current flat rate of 20 percent has often been criticized for unfairly favoring the rich.

As a potential first step, the prime minister plans to craft a stimulus package worth "tens of trillions of yen" by the end of the year to support individuals and businesses hit by the coronavirus.

"Savings among households and firms have been growing during the pandemic. So, in the short run, it will be more appropriate for the government to provide incentives for them to spend more" rather than directly providing financial aid, said Yoshimasa Maruyama, chief economist at SMBC Nikko Securities Inc.

Japanese households held a record 1,072 trillion yen ($9.6 trillion) in cash and deposits at the end of June, according to Bank of Japan data, as the pandemic curbed spending, while a Finance Ministry survey for the year through March 2021 showed that companies' internal reserves totaled 484.36 trillion yen, a record high for the ninth straight year.

Measures such as the government's "Go To Travel" subsidy program to support the tourism sector would help to spur consumer spending, Maruyama said.

The government launched the travel promotion campaign last year but it was suspended in December due to a resurgence of coronavirus infections.

The new Finance Minister Shunichi Suzuki advocated the introduction of a carbon tax to reduce greenhouse gas emissions when he was environment minister.

Given Amari was the head of the LDP's Research Commission on the Tax System for two years from 2019, Kishida may seek to use taxation to promote corporate spending on green technology "to fix the money surplus problem," Dai-ichi Life's Kumano said.