Vaccination minister Taro Kono is still the most popular choice among ruling Liberal Democratic Party rank-and-file members to be the next head of the LDP and hence Japan's prime minister, a Kyodo News poll showed Sunday, ahead of the party's presidential election later this week.

After incorporating LDP Diet members' planned votes, however, none of the four candidates in the LDP leadership race is likely to win an overall majority vote in the first round, meaning the successor to Prime Minister Yoshihide Suga is expected to be determined in a runoff vote. 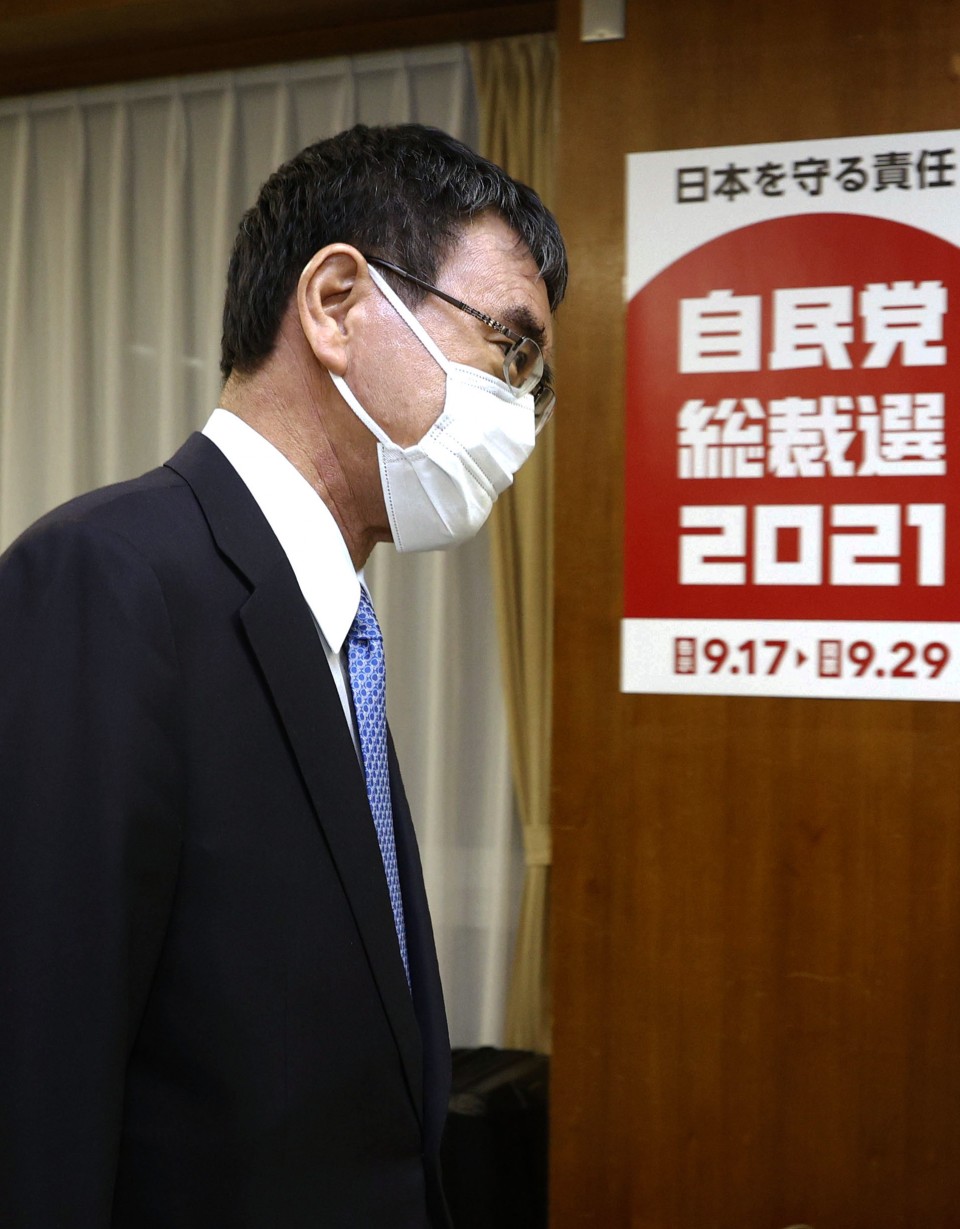 Vaccination minister Taro Kono walks toward the venue for an online debate session at the ruling Liberal Democratic Party's headquarters in Tokyo on Sept. 26, 2021. (Kyodo)

Among the rank-and-file voters, Kono gained 47.4 percent support, down 1.2 percentage points from the previous survey held earlier this month, and was followed by former Foreign Minister Fumio Kishida at 22.4 percent, up 3.9 points.

Former communications minister Sanae Takaichi came third at 16.2 percent and LDP executive acting secretary general Seiko Noda was at 3.4 percent, while 10.7 percent of the respondents said they have yet to decide who to vote for.

The party election will be held on Wednesday after Suga said earlier this month he will resign amid mounting criticism over his government's coronavirus response.

In the first round of the election, each of the LDP's 382 Diet members will cast a vote, and another 382 votes will be determined based on the preferences of some 1.1 million rank-and-file members. If no candidate secures an outright majority, a runoff will be held with votes from the 382 Diet members and each of the LDP's 47 prefectural chapters.

Whoever wins will become prime minister when the Diet holds an extraordinary session from Oct. 4 as the LDP-led coalition holds a majority in both chambers of parliament.

Among the 382 LDP parliamentarians, Kyodo News found that Kishida was leading the race with more than 30 percent supporting him. Kono and Takaichi followed with more than 20 percent, but many were still undecided about their vote.

Converting the support rates to votes in accordance with LDP presidential election rules, Kono is set to secure more than 200 of the 382 rank-and-file votes. Kishida is expected to gain over 90 votes, Takaichi around 70 votes and Noda about 10 votes.

Asked about policy areas they hope the new leader will place priority on, 30.2 percent mentioned economic policies, followed by 22.3 percent who said coronavirus responses, 15.4 percent for social security and 14.7 percent for diplomacy and security.

The two-day telephone survey was conducted from Saturday, with 1,014 rank-and-file members and supporters of the LDP responding.