Defense Minister Nobuo Kishi on Monday went on board the British aircraft carrier the Queen Elizabeth in Japan at the U.S. Navy base in Yokosuka, southwest of Tokyo.

Kishi's inspection of the state-of-the-art carrier is intended to demonstrate the robust ties between the two nations as Tokyo and London deepen their defense cooperation in response to China's military buildup and assertive territorial claims. 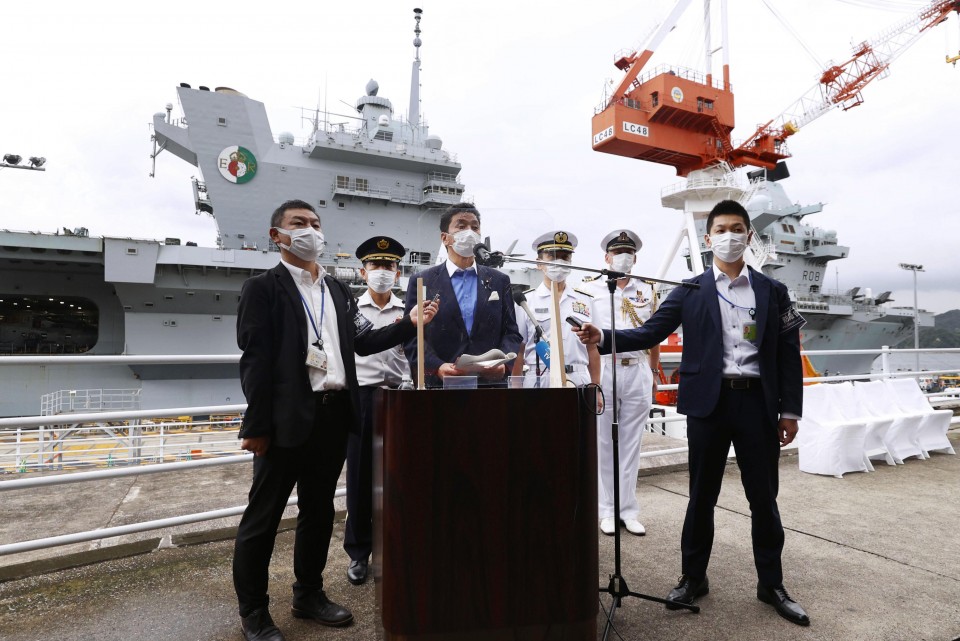 Defense Minister Nobuo Kishi (3rd from L) is pictured at a press conference after inspecting the British aircraft carrier the Queen Elizabeth at the U.S. Navy base in Yokosuka, southwest of Tokyo on Sept. 6, 2021. (Kyodo)

"I felt Britain's strong desire for peace and stability in the Indo-Pacific region," Kishi told reporters. "By boarding the vessel, we were able to widely publicize the further development of defense cooperation with Britain at home and abroad."

Britain has been stepping up its engagement in the region, partly propelled by Beijing's attempts to undermine democracy and human rights in Hong Kong, a former British colony.

The carrier strike group led by the Queen Elizabeth, commissioned in 2017, is making its first port call in Japan.

It is Britain's largest aircraft carrier, capable of carrying up to 40 aircraft, including British and U.S. F-35B advanced stealth fighter jets, according to the Royal Navy.

While inspecting the fighters, Kishi said he also held talks with the group commander, who was with the country's ambassador to Japan on the ship, stating his determination to enhance cooperation.

Since Thursday, the strike group has been conducting joint exercises with Japan's Self-Defense Forces, as well as vessels from the United States, the Netherlands and Canada, in a veiled counter to China's rising assertiveness in the East and South China seas.

Before Kishi visited the aircraft carrier, he also inspected the Dutch frigate Evertsen, which is part of the strike group.

The group, which left Britain in May and arrived in Japan on Saturday, is scheduled to leave the U.S base later this week.